Scott McGregor, President and CEO of Broadcom, sees some major changes for the semiconductor industry moving forward, brought about by rising design and manufacturing costs.

Speaking at the SEMI Industry Strategy Symposium (ISS) in January, McGregor said the cost per transistor was rising after the 28nm, which he described as ŌĆ£one of the most significant challenges we as an industry have faced.ŌĆØ

He said that in the past, it was a ŌĆ£no brainerŌĆØ for a design company to move its entire set of products always forward to the next generation. ŌĆ£Every generation would be better than the previous one. It would be faster, it would be lower power, it would be more cost effective,ŌĆØ he said.┬Ā ŌĆ£We think weŌĆÖre now seeing this come to a bottom.ŌĆØ The reason for increasing transistor cost is the complexity of the devices, and the cost of the equipment required to produce them. McGregor said these costs are going up exponentially. ŌĆ£Those exponential factors are now starting to drive the cost forward. This is going to drive some change,ŌĆØ McGregor predicted. 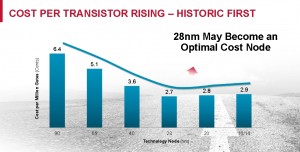 Chip design cost is also increasing exponentially. McGregor showed a chart with dramatically increasing cost for each process node for such things as software, prototyping, validation, verification and IP qualification per process node. 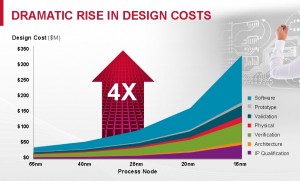 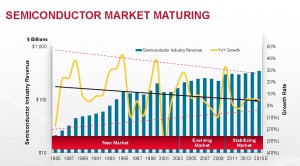 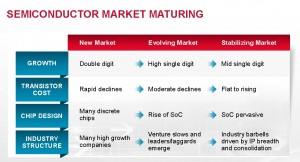 Although mature, the industry will still see some volatility, although less than in the past. ŌĆ£supply is easily overridden and it takes a long time to build some of these devices like scanners so thatŌĆÖs going to create volatility,ŌĆØ he said.

He also predicted that SoCs would become even more pervasive. He used a set top boxes as an example, noting that they used to be full of boards crammed with lots of discrete parts. ŌĆ£Today, if you open up a set top box, youŌĆÖll see a relatively small circuit board inside with a large chip that integrates almost all the functionality,ŌĆØ he said. ŌĆ£The box is still the same size because consumers perceive value in the size of the box, but itŌĆÖs mostly air inside.ŌĆØ

McGregor said the tapeout costs to do a single device are very high. ŌĆ£You have to put $100 million into a semiconductor startup today to be able to get to productization.ŌĆØ This means that big companies will be getting bigger. ŌĆ£There will still be some small companies ŌĆō but I think the mid-sized company in our industry, in devices, is going to dramatically go away because of the scale and other things required,ŌĆØ he said.

A big impact of these changes is that the process node selection is going to change. ŌĆ£Instead of immediately going to the next node, youŌĆÖre going to stay in nodes longer. That means, for example, that 28nm is going to be a very long-lived node. There are a lot of things that probably will not make sense to move beyond 28nm for a long time. It will not automatically mean you should go to 16 or 14nm, or 10nm. There will be relatively few devices that economically make sense to do that,ŌĆØ he said.

He noted that Broadcom crossed the threshold where software engineers outnumbered software engineers a number of years ago and now has ŌĆ£significantly moreŌĆØ software engineers than hardware engineers. ŌĆ£ThatŌĆÖs an interesting transition because weŌĆÖre now delivering systems instead of just chips. The value just doesnŌĆÖt come from the transistors — It comes from all the other pieces put together. One of the challenges for us as an industry is getting paid for that. Unfortunately, for many of us, the software is the ŌĆśgift wrapŌĆØ for the chip rather than something we can monetize,ŌĆØ he said.