Watching the videoÂ from the new iPad Pro launch back on October 30, there was a pseudo assembly sequence within it. Being the teardown nerd that I am, I kept running through it until I got a set ofÂ screen shots that showed the motherboard being populated, one of which was: 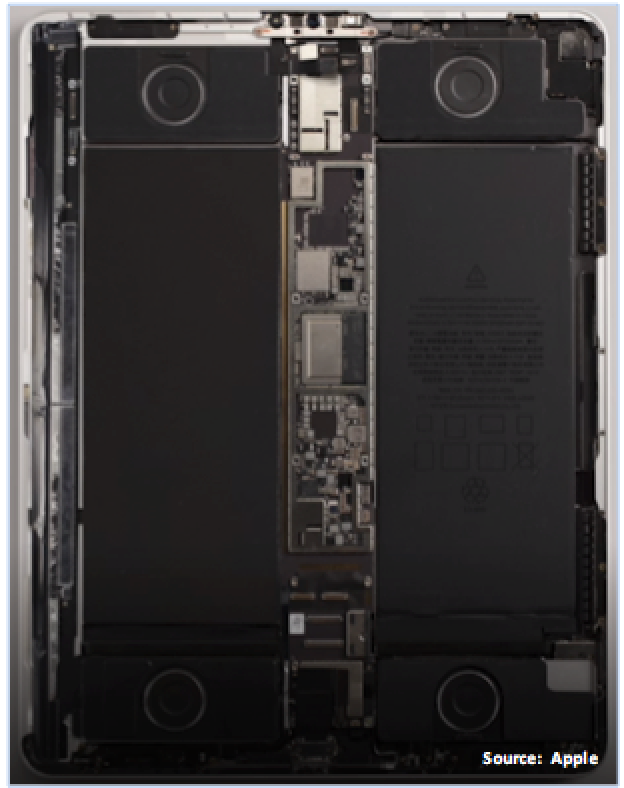 In the centre is what one presumes to be the A12X; but it looks like a half-package, together with what could be a couple of DRAM packages. Consequently, we zoom in, and get this: 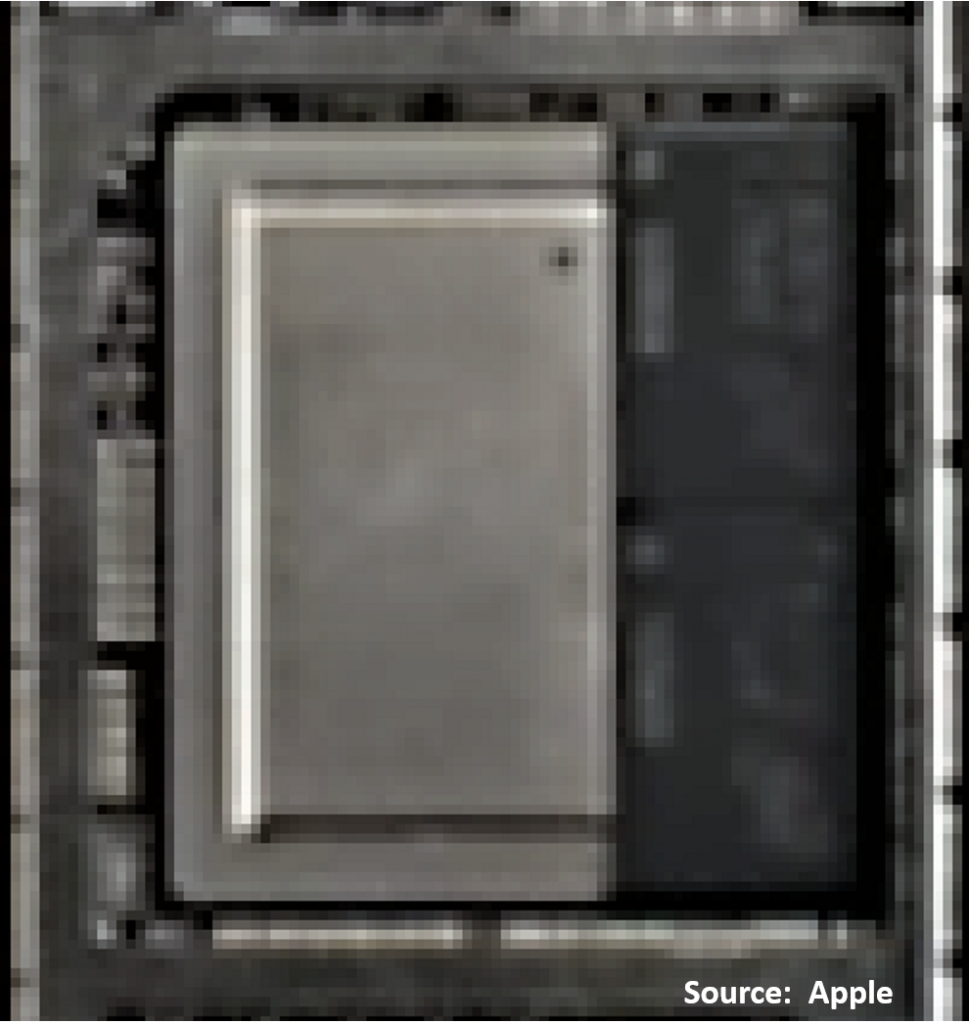 Itâ€™s very pixelated, but we have what looks like half of a BGA package with a metal lid, and what again looks like two DRAM packages. No A12X marking, but iPad Pros usually have a lidded BGA for their A-X-series chips, and the packages alongside and their markings look real, and suspiciously like Micron DRAM â€“ nothing is actually legible.

So, what looks like more package innovation from Apple, with no publicity as usual, and given that this is the launch video, and could be different from reality, I parked my speculation until TechInsights did their teardown.

They confirmed what Apple showed, we have some sort of unusual A12X packaging going on; 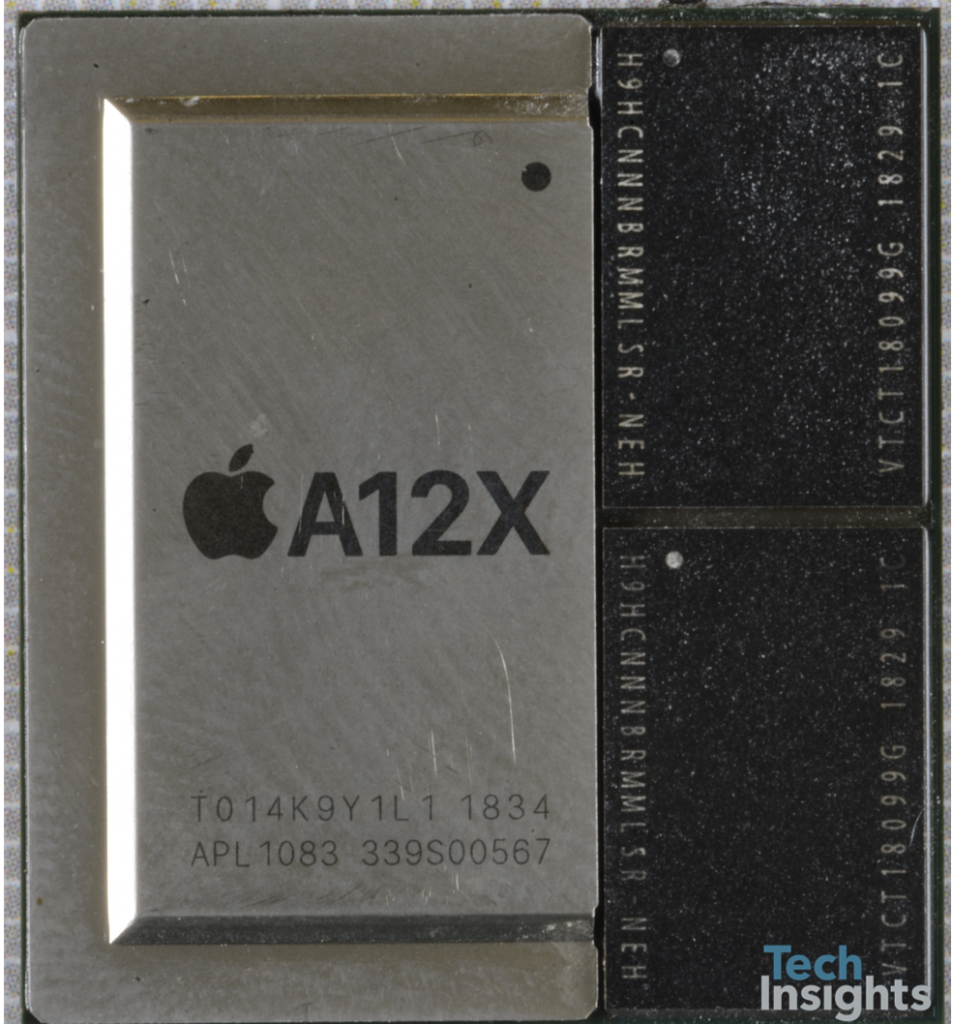 And if we look in close-up, we can see that there are two SK Hynix LPDDR4 DRAMs (H9HCNNNBRMMLSR-NEH, 4 GB total) adjacent to an abbreviated lidded BGA package of some sort, onÂ a custom substrate, mounted onto the motherboard;Â 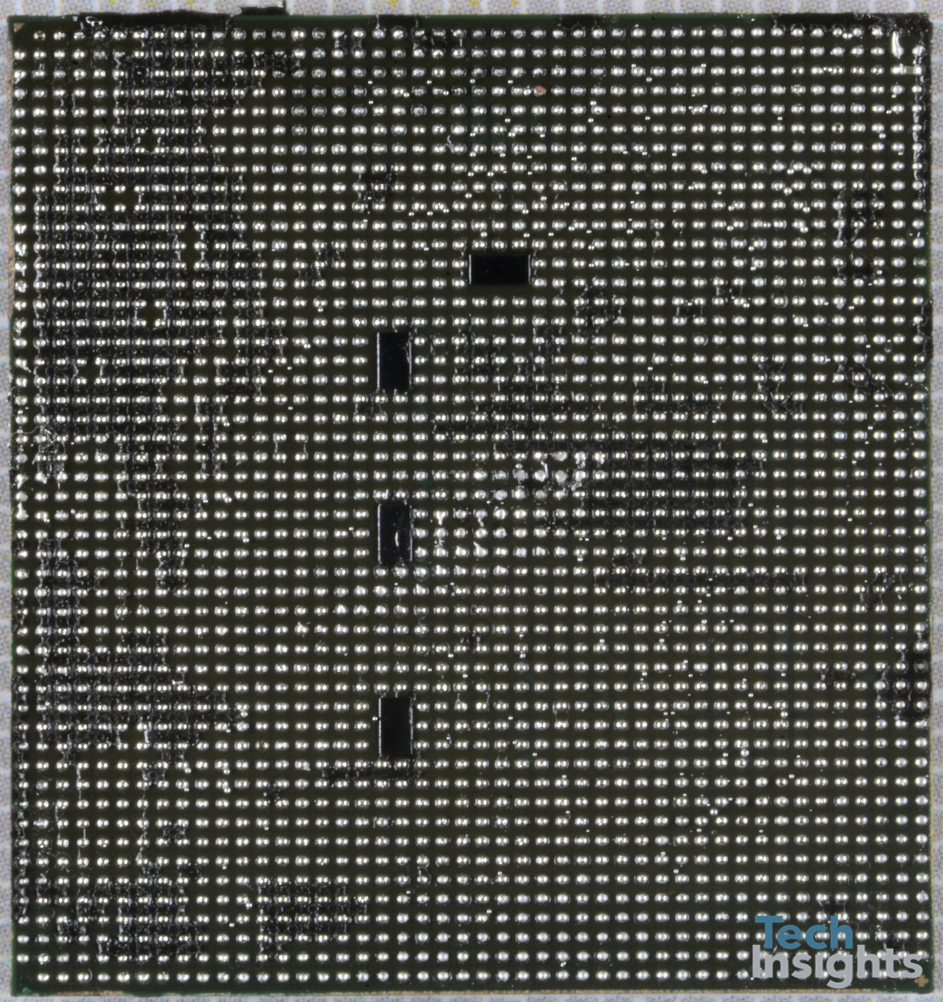 They also took the assembly off the motherboard, so that we can look at the base.

Out of curiosity, I also looked at the iFixit teardown, and the boards look exactly the same, but their version has Micron DRAM (Micron MT53D256M64D4KA, 4 GB total) paired with the A12X, a reflection of Appleâ€™s multiple sourcing for memory. Both options are using 2 x 16 Gb parts, which could be 2 x 8 Gb dies in each package, or possibly 4 x 4 Gb. 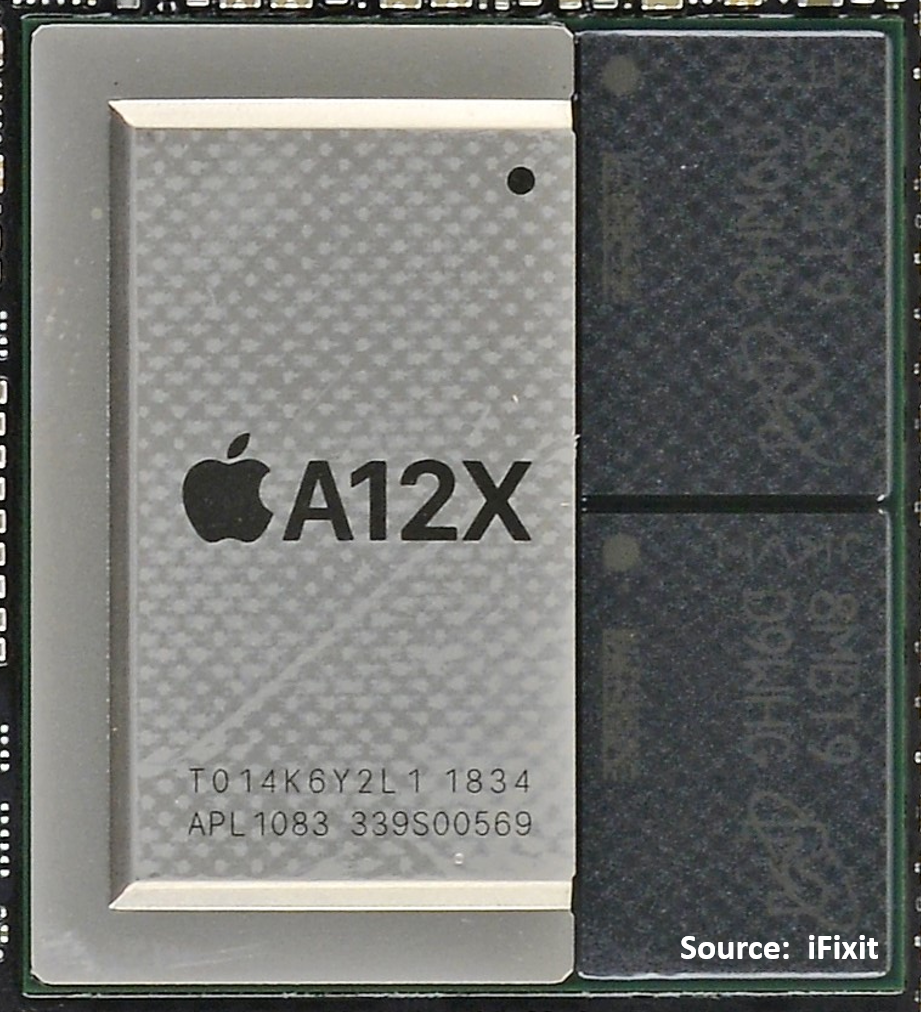 We can see that the two A12X parts have the same APL1083 part number, and even the same 1834 date code, but the more detailed device numbers are slightly different; the TechInsights sample is 339S00567, and the iFixit version is 339S00569.

TechInsights also did their customary x-ray, and the shadow of the thermal interface material (silicon is almost transparent to x-rays) gives us an estimated die size of ~10.4 x 13.0 mm (~135 mm2). There appear to be some ceramic passive components under the lid, and likely four silicon-based capacitors located on the base of the substrate. While the x-ray does confirm that we have three packages on a common substrate, it is odd that the BGA does not have any visible solder balls showing up in the image. 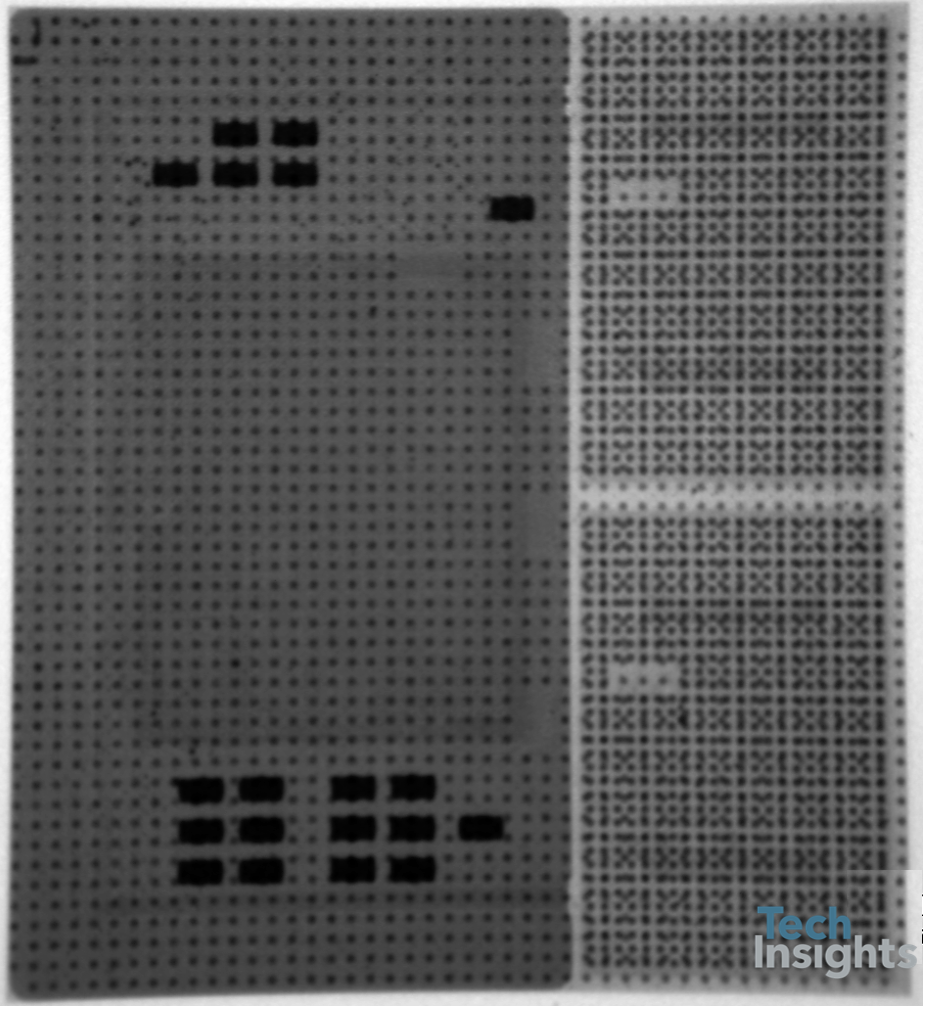 The DRAM packages clearly show their solder pattern meshing with that of the substrate; no such thing under the Apple chip. I can think of two reasons for that â€“ the A12X package has exactly the same ball grid as the substrate (seems unlikely); or the assembly is truly a lidded BGA with the die flip-chipped conventionally onto the substrate under a truncated metal top, and the memory FBGAs mounted beside it.Â

Looking at the perspective image above, it seems clear that the latter is the case. We can see the Micron DRAMs in the foreground, and the lid of the A12X package sits directly on the substrate, as it would do in a standard lidded BGA package.

In mobile phones we have had DRAM and application processor (AP) in package-on-package (PoP) configuration since the first iPhone, to save space and reduce delay time between the processor and memory, and power dissipation is relatively low so heat transfer is less of a concern, allowing the PoP stack. In tablets, they generate more heat, and space is less critical, so APs typically have a liddedÂ package with the DRAM on the motherboard close by. This shot of the A10X shows what I mean. 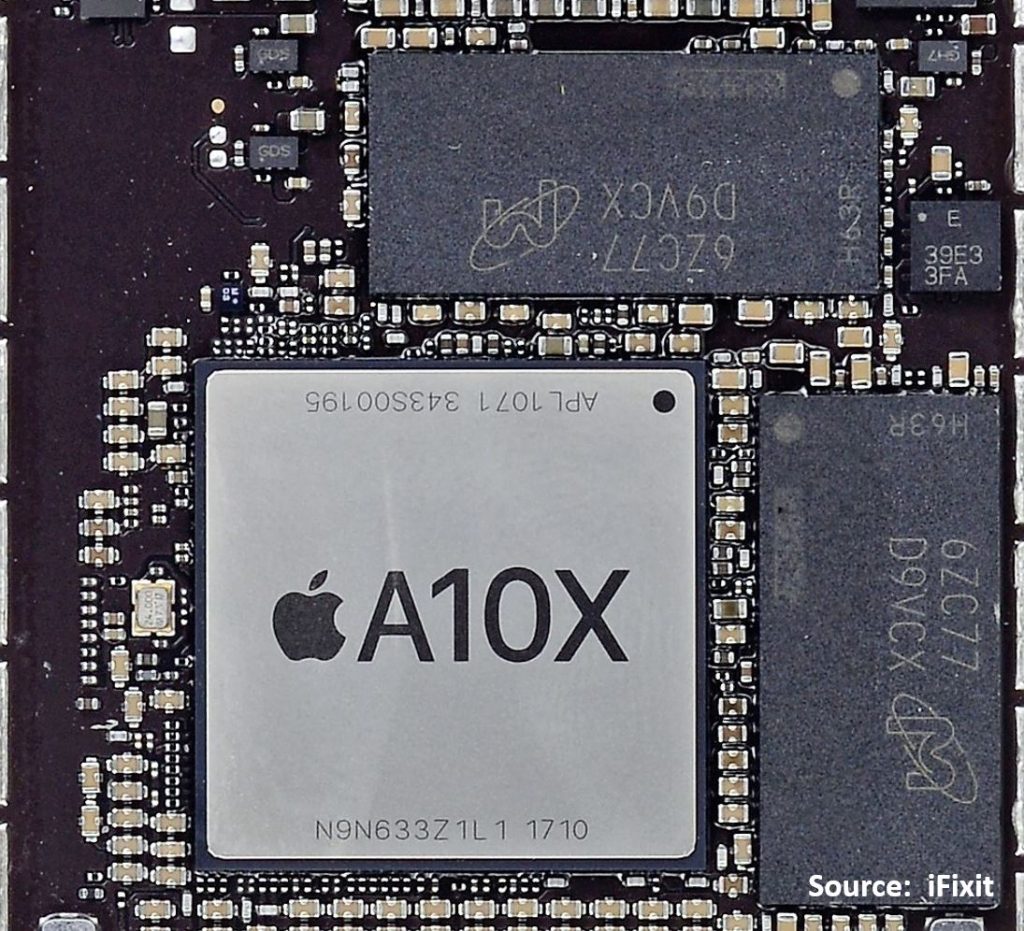 However, the memory latency has to be inherently larger in this layout, and one of the innovations we have expected in this context is to see the memory flip-chipped on to the same substrate; though I, at least, expected to see that in a phone first, to reduce package height.

That would be a form of 2.5D packaging, but silicon interposers or Intelâ€™s EMIB technology (using an embedded interconnect die) are likely too expensive for Appleâ€™s taste. Organic interposers are cheaper, but still in their early days commercially.

Here we have a compromise â€“ take a regular lidded BGA, cut off half the lid, and place the memory packages on the same BGA substrate. We have the advantages of good heat dissipation, and really close placing of the memory to the AP for minimal delay, and it is also likely the cheapest option. Flip-chip memory on the substrate for a 4 GB model would likely require two 16-Gb dies, which if they are available, would be more expensive.

To see what is really going on, we will have to wait until one of the analysis companies shows us a cross-section. We were right â€“ more innovative packaging from Apple!