Finishing up on the IEEE 3DIC meeting from Oct 2013 in San Francisco lets look at some of the remaining key papers from the conference.

It is accepted that to achieve compact-sized 3DIC each functional wafer should be thinned to 50ÎĽm or less. However, the ultra-thin nature of Si substrate leads to several problems such as weak mechanical strength, warping and local deformation in the stacked die . Â Moreover, the weak mechanical strength of the extremely thin die/wafer itself has a potential concern lead to die breaking for 3DIC integration, because thin LSI chip with high density TSVs is highly fragile and more easily damaged. Hence, it is important to understand the impact of chipâ€™s mechanical strength on device reliabilities decreasing die thickness, especially below 50ÎĽm thickness. 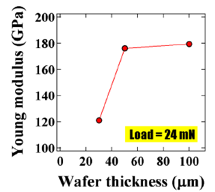 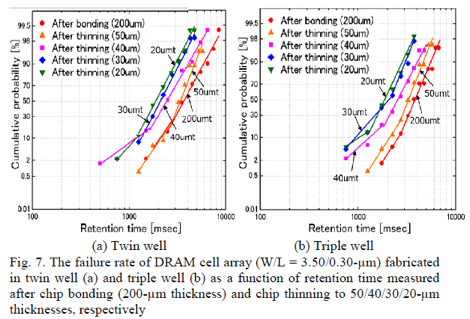 They assume that the band-gap energy in the thin chip is affected by the distortion of the lattice structure, hence effect on a minority carrier lifetime, consequently shortening the retention time of DRAM cell.

Ultra-thinning to 10 microns or less of Si wafer is expected to realize small TSV with low aspect ratio and coupling capacitance. Subsurface damage following wafer thinning from the back of 300 mm wafers using three different types of thinning process was investigated by means of Raman spectroscopy, XTEM, and Positron annihilation analysis, respectively. A coarse grinding generates significant rough subsurface ranged several micron and damage layer including amorphous and plastic-deformed Si along grinding topography. Fine grinding, second step of thinning, reduced those surface roughness and almost removed after thinning at least removal of 50 microns. However, plastic-deformed subsurface layer with a thickness of 100 to 200 nm are still remained which leaves an inside elastic stress layer ranging up to about 10 microns in depth. Chemical-Mechanical Polishing (CMP) process as a final step of thinning enables to remove residual damages such as structural defects and lattice strains after 1-5 microns thick polishing while vacancy-type defects only remain.

The authors acknowledge that further investigations are necessary to find â€śhidden residual defectsâ€ť and to understand the influence of thinning on memory devices (see Tohoku discussions above).

ASE and National Chiao Tung UnivÂ  have studied three types of bonding, including Cu-In, Sn/In-Cu, and Cu/Ti-Ti/Cu, for application of 3D interconnects.

Cu/Ti samples were bonded face to face with a bonding pressure of 1.91 MPa, at a heating temperature of 180 C for 50 min. Â They add that Cu can be protected from oxidation by capping Ti on Cu surface before bonding. This last structure is especially significant if one can really do such bonding at 180 C . Their EDX investigation of the interface shows that â€śâ€¦apparently there is a Cu layer at the bonding interface instead of Ti layersâ€¦due to lower activation energy at the surface, Cu tends to diffuse towards the surfaceÂ  â€¦â€ťÂ  IFTLE feels this combination certainly deserves further study.

All bonded structures have shown excellent electrical performance and reliability characteristics. Based on bond results, these structures can be applied for low temperature bonding in 3D interconnects.

Matt Lueck of RTI Int described their successful demonstration of the use and reliability of Cu/Sn microbumps for the fine pitch interconnection of heterogeneous semiconductor die. InP die have been bonded to Si substrates using a 6.4 mm Ă— 5.12 mm area array of alloyed Cu/Sn microbumps on 10 ÎĽm pitch.

A key technological challenge facing the 3D integration of heterogeneous semiconductors is the formation of high density metal interconnects between dissimilar substrates, such as compound semiconductors (CS) and Si. Due to the difference in the coefficients of thermal expansion (CTE), one can expect: 1) some misalignment between microbumps fabricated on the CS substrate and the Si substrate during bonding at an elevated temperature; and 2) bond interconnects will experience shear strain as the bonded die pair is cooled to room temperature and during any subsequent thermal excursions. 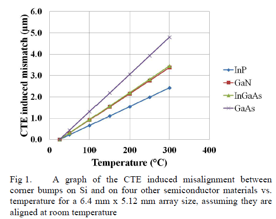 To estimate the magnitude of the misalignment, they calculated the relative change in distance between corner microbumps in a 10 ÎĽm pitch 640 Ă— 512 array on CS die vs. Si die. Operability was determined by electrical testing of long daisy-chains of bumps.

They conclude that Cu/Sn micro bumps can be successfully and reliably used for integration of InP and Si die.

Continuing our look at the 2013 GaTech Interposer Conference.

A reader has written in to indicating that the FPGA chip described in the Xilinx/SPIL paper was fabricated by TSMC not UMC .

Since the whole LCD infrastructure is based on thin glass we certainly did not need any convincing that large panel, uniform, thin glass is available in roll and/or large panel format. Corning like Asahi Glass and Schott glass has been researching the formation of TSV (or TGV) for several years now and all appear somewhat able to form through vias down to maybe 25um. The real question is how do we than use this feedstock to get low cost glass interposers.

Though we were shown some Cu fill experiments, neither Corning nor SchottÂ  indicated that they would enter the interposer market, did not indicate who such a partner would be and in fact stated that their discussions with the FPD industry( which they most certainly now supply) indicate that there is absolutely no interest in FPD suppliers entering the interposer supply market.

IFTLE concludes that if any of the current glass suppliers want to see glass become a interposer substrate material and more broadly a preferred packaging substrate material, they must resolve who will actually be supplying the final packaging products.

Asahi glass has attempted to fill this void with Triton, their JV with nMode [see IFTLE 141, â€ś100GB Wide IO memory; AGC Glass Interposers; Nvidia talks stacked memoryâ€ť ] Corning and Schott have not yet indicated what their proposed solutions are.

Koizumi-sanÂ  of Shinko discussed glass substrate prototyping status. Shinko points out that glass cores can be used to mimic Si like interposers or build-up PCB substrates.

He showed data on a 200um glass core PCB with a 5/0/5 build up process ( 30um polymer/18um thick Cu per layer) . When diced such structures resulted in what they called â€śSe-wa-reâ€ť (loosely translated back split) which was fracture through the glass core layer due to the stresses built up on both sides of the core. Modeling calculations show that the glass internal stress is mainly caused by the total copper layer thickness. 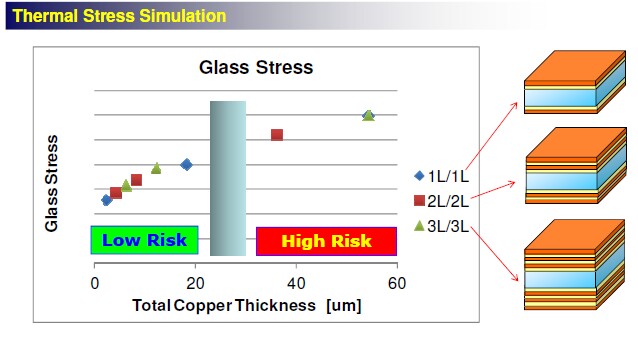 John Xie of Altera examined the use of organic interconnect for stacked die integration.Â  Alteraâ€™s take on Interconnect resolution trends are compared below. The proposal is that organic build up (BU) substrate (dry processed) is rapidly approaching the capabilities of this film BE of line packaging on silicon. 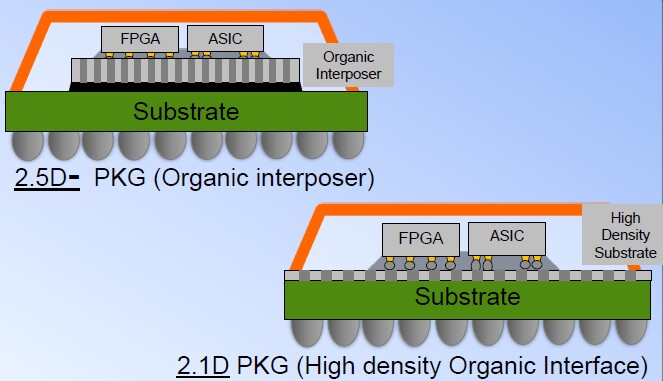 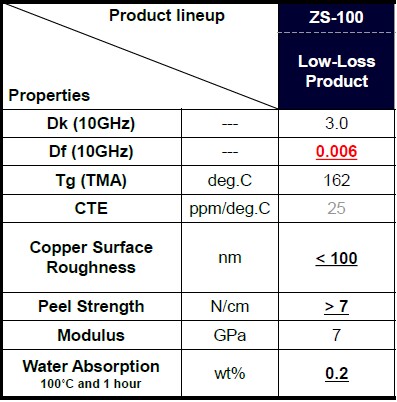 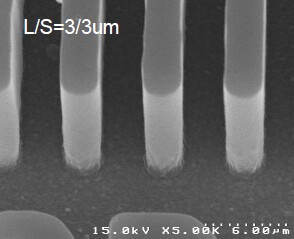 Continuing our look at the 2013 GaTech Interposer Conference.

Ron Huemoeller of Amkor addressed interposer use, defining the markets and materials options as follows:

Amkor projects that in the high end silicon will dominate; in the mid-end, silicon will be prominent and organic /glass may play a role; in the low end, organic, or low cost glass or silicon if they exist will play a role.

– high volumes for mobile; interposer cost driven at less than $0.01 per sq mm.

– expect to have a very long life cycle

– TSMC â€“ not supplying to the industry

– use of depreciated equipment and excess capacity

Dave McCann of GlobalFoundries examined market needs for interposers. McCann used the latest Gartner data on SoC costs to point out that development costs for a 10nm design are expected to approach $400MM. 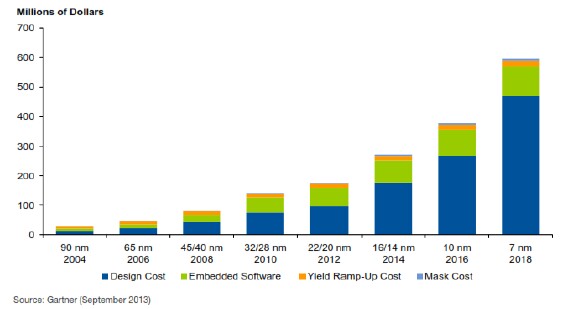 GF again made the case that â€śDIS-integrationâ€ť can actually offset scaling costs, i.e.: 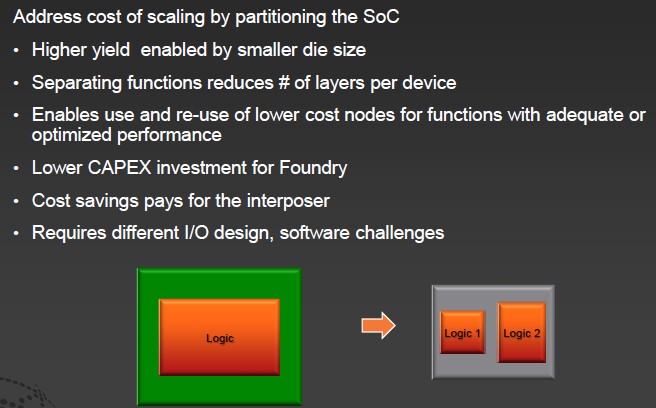 GF has come up with the following roadmap for silicon, high density laminate and glass. 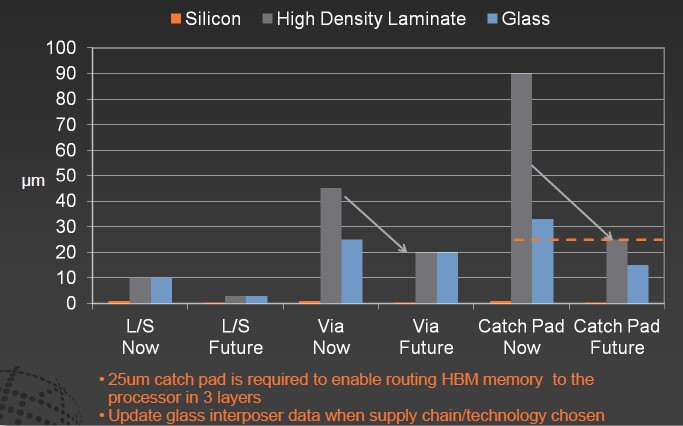 Like Amkor, GF has mapped 2.5D requirements by market space and come up with the following. 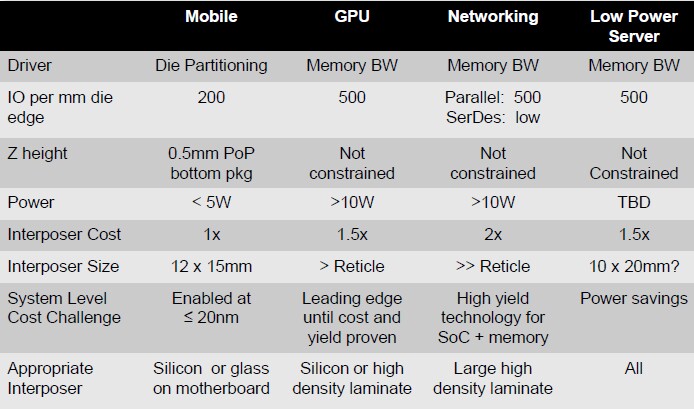 Also similar to Amkor GF pointed out that the industry needs a low cost high volume source ofÂ  high density interposers. Although showing their capabilities for interposer fabrication, interestingly they did not offer themselves up as the solution.