At IEDM last year, Intel gave a half-dozen papers on various topics, including two on their 22FFL SoC process aimed at low power IoT and mobile products. The first (14.1) was an invited presentation on ãIntel 22nm FinFET (22FFL) Process Technology for RF and mmWave Applications and Circuit Design Optimization for FinFET Technologyã, and the second (18.1) introduced ãMRAM as Embedded Non-Volatile Memory Solution for 22FFL FinFET Technologyã. I had planned to cover the two papers in one article, but it expanded to the point where it made more sense to split it into two parts. So, here is the first part on the RF enhancements to the 22FFL process.

Mark Bohr announced the 22FFL process at the Technology and Manufacturing Day (TMD) at the end of March in 2017. At the time they said that it was ãFully RF design enabledã, but gave no more details, and MRAM as an option was not mentioned.ô More details were given at IEDM 2017 [1], but again no discussion of MRAM. The basicô process details as stated at TMD were: 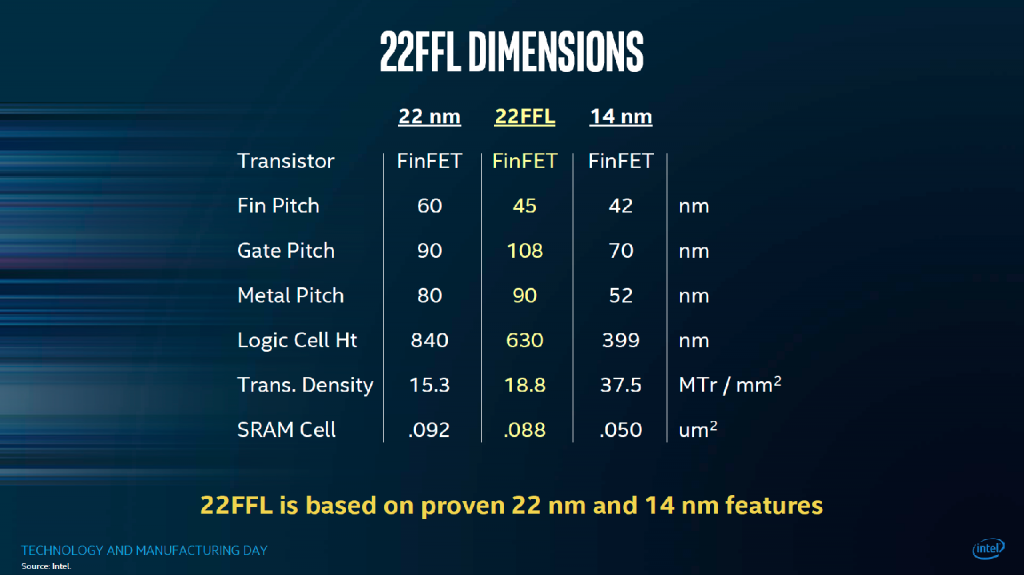 The raw dimensions, as youãd expect, are in between the 14-nm and 22-nm processes. The logic transistor images shown at IEDM17 indicate that 22FFL is based on the 14-nm technology, since we no longer have the tapered fins, and the punch-stop seal is present:

The high-performance transistors show 57%/87% higher NMOS/PMOS drive current compared to the 22-nm technology. The use of the punch-stop diffusion means that the fins are undoped, so Vt is set by adjusting gate length and work function for the various devices. As shown in the table, the HV transistors have thicker gate oxide and longer gate lengths.

When it comes to the RF capabilities, a device with optimized layout was developed and showed fT/fMAXof 230 GHz/284 GHz and 238 GHz/242 GHz for NMOS and PMOS respectively, with a 32 nm gate length.

Other SoC features in 22FFL are high resistance substrate, deep N-well isolation, precision resistors, MIM capacitors, and high-Q inductors. The relaxed metal pitch of the single-patterned back end results in reduced parasitics at the sacrifice of density ã a good tradeoff for RF SoCs.

In this yearãs RF paper [2], five flavors of RF transistor are offered; nominal and low VTlow-leakage, nominal and low VThigh-density, and high-performance (HP). A drawback of FinFET technology is the increased lateral parasitic capacitance given by the extra gate material between the fins ã as the poly pitch gets tighter, the capacitance increases, lowering fT, without increasing transconductance (??). This effectively means that the 22-nm process is better suited to RFô applications than smaller or larger nodes.

A known phenomenon of finFETs is self-heating, where the fin temperature increases while conducting current, made worse by the thermal isolation of the fin. This impacts temperature-dependent parameters such as mobility and threshold voltage, resulting in performance degradation, and endangering device and interconnect reliability. The effect can be reduced by operating at lower current densities or supply voltages, potentially trading off performance for reliability. Since finFETS have better channel control than planar devices, we can keep strong drive current at low supply voltages, enabling high performance low-voltage designs without reducing reliability.

Another feature of finFETs is the additional vertical component of the gate resistance; this non-linear resistance allows the designer to optimize devices for fTor fMAXby tuning theô configuration of fins and gate legs. 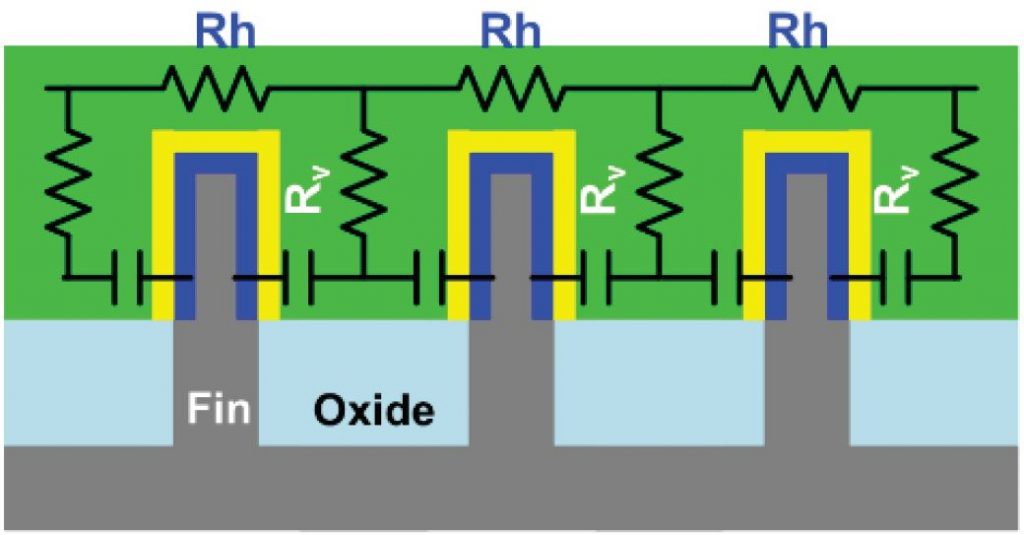 The Intel paper does not give any data on the number of fins or gate legs for the devices described, but I found this simulation [3] based on Intelãs published figures for their initial 22-nm process, i.e. with trapezoidal fins [4]. Using the same effective gate width, it gives an indication of the influence of the fin and gate finger configuration on RF performance. One presumes, looking at these fTnumbers (fT >750 GHz for 20 fins), that there are significantlyô fewer fins in the 22FFL transistors quoted, with an fTof ~300 GHz. 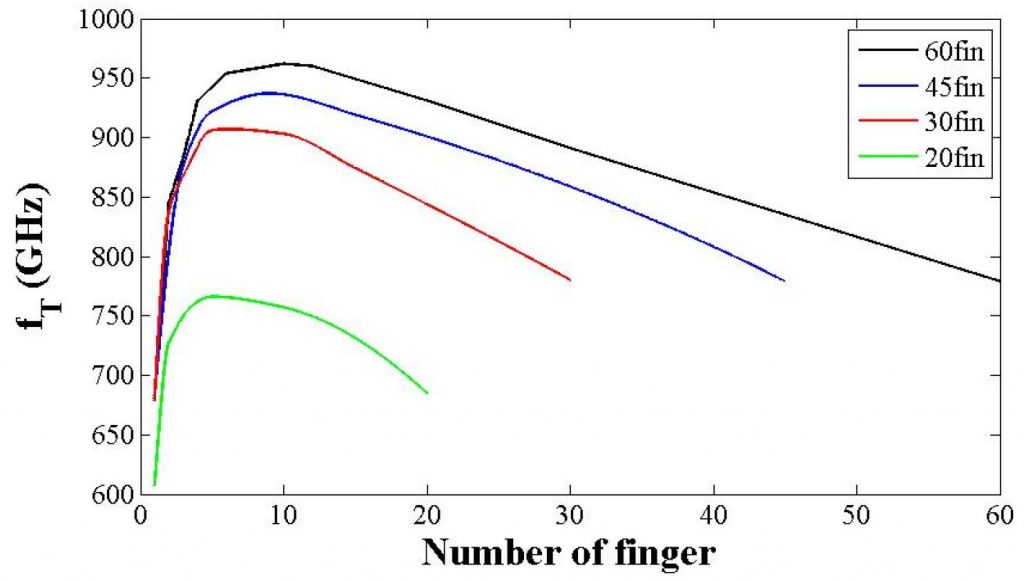 fT vs. numbers of fingers and fins; the finger number for each different fin number is adjusted to give the same device width [3].

For low-noise amplifier (LNA) designs, noise matching and power matching can be tuned by regulating the input impedance, adjusting the number of fins for a particular device sizing.

Below we see three cases of fin configuration, maintaining total device size by changing the number of gate fingers. The maximum available gain ????and the minimum noise figure ?????vary with the fin number, so the LNA figure of merit (FoM = ????ã ?????) also varies. In thisô case the FoM maximum is in 4- or 6-fin devices; ????and?????were normalized to the ????and ?????of a 2-fin device.

While the above figure shows relative ?????, other work [5] shows that the noise figure isô below 2 dB up to 73 GHz, suitable for a mm-Wave receiver LNA.ô 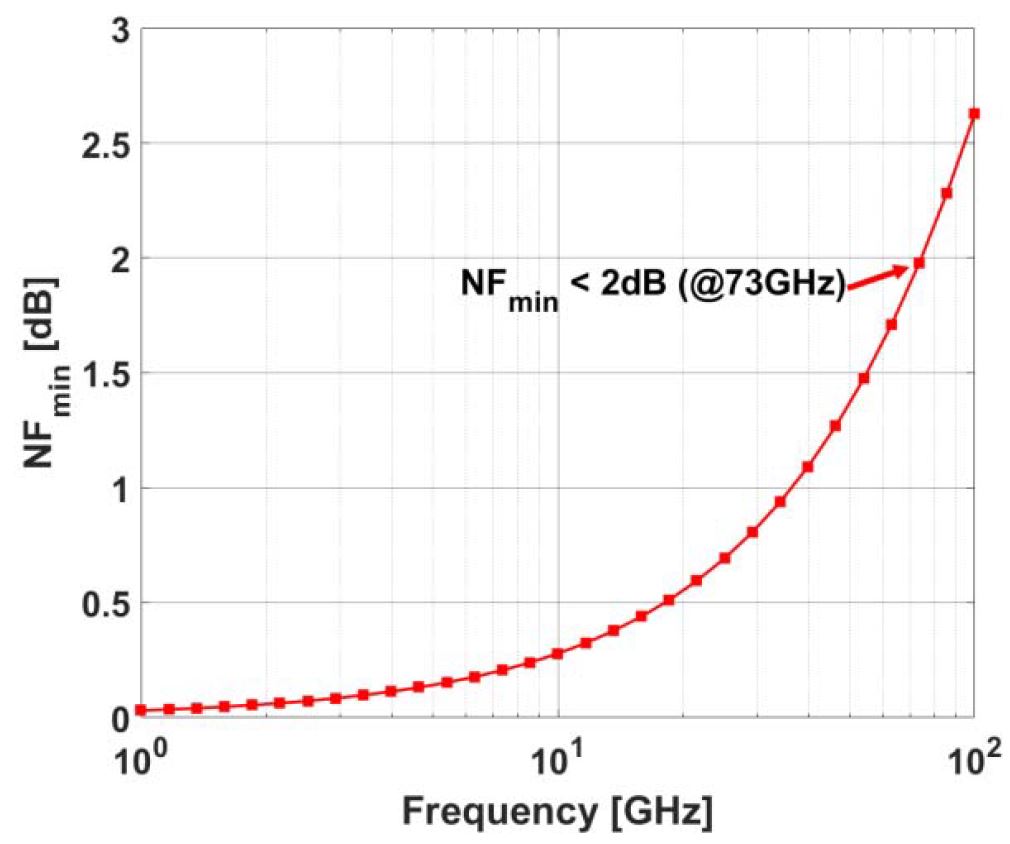 When it comes to flicker (1/f) noise, FinFETs have inherently lower drain-induced barrier lowering (DIBL) compared with planar transistors, and we have the punch-through-stop diffusion in 22FFL, so there are no VT adjust implants, and likely no halo implant, both of whichô help generate flicker noise. By comparison, an equivalent planar transistor is at least 10x greater. 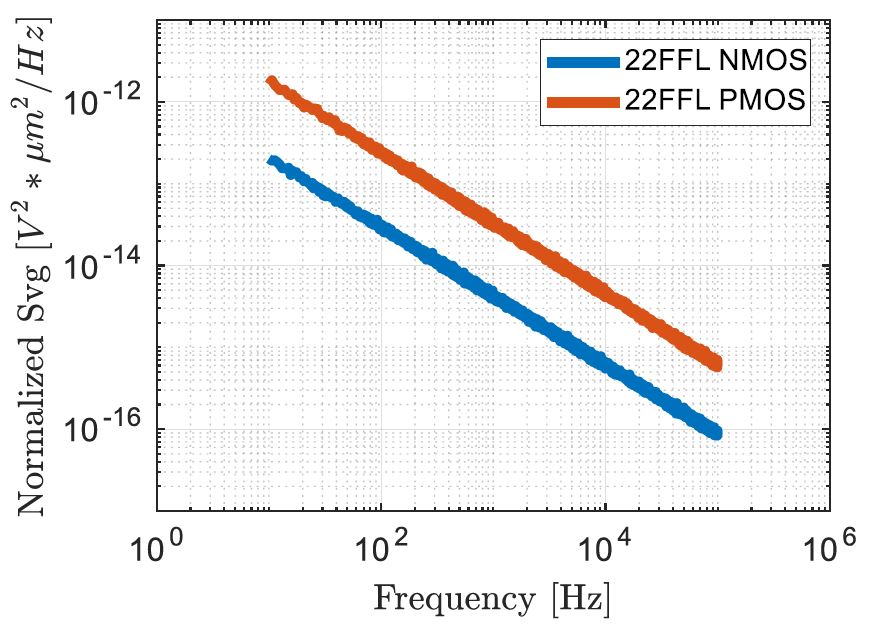 We will see what products come out in the RF-enhanced 22FFL, but with 5G looming up and Intel getting design wins in iPhones, there does seem to be potential, and Intel has clearly been working on the technology.ô