For over two years now, IFTLE has been saying that memory stacks will soon be seen in high end graphics processor modules. Nvidia was the first to announce the use of stacked memory with GPUs [see IFTLE 145 ‚ÄúGPU Roadmap‚Ä¶.‚ÄĚ (April 2013)]. Nvidia‚Äôs Volta GPU module was scheduled for 2015 release and was supposed to use the Micron Hybrid Memory Cube (HMC). Rumors are that after HMC‚Äôs development fell behind the proposed roadmap timing, Nvidia moved the Volta introduction out to > 2016 after the Pascal module, which will be based on Hynix HBM 2 and is scheduled to be commercial in 2016.

So now the first commercial graphics products to feature HBM clearly will be AMD‚Äôs R9 390X series Fiji GPU in 2015. The Rx 300 series will also reportedly be the first to feature TSMC‚Äôs 20nm technology and the first to be equipped with HBM. There are 4 HBM stacks packed on the same interposer as Fiji. Each HBM stack has a capacity of 1GB of memory.

Recent rumors from Taiwan indicate that production is being slowed by issues concerning delivery of the silicon interposers from their primary supplier. Reports are that AMD is having to rely more heavily on the secondary supplier to try to keep production on track. 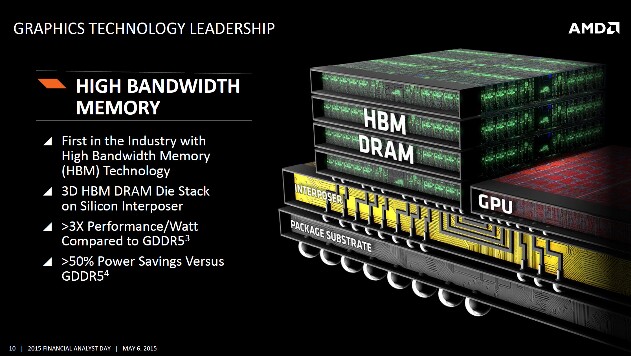 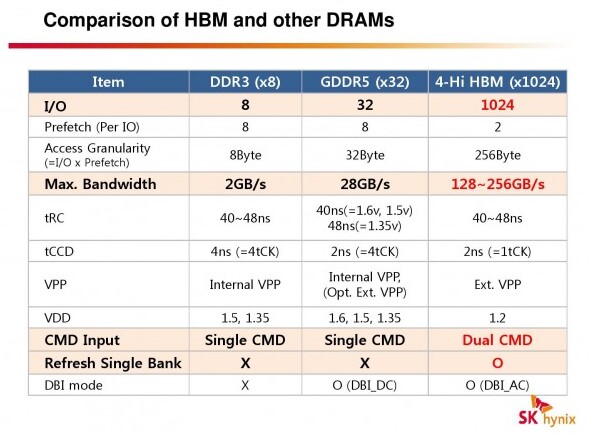 The second generation HBM is well underway and promises to double the bandwidth by doubling the speed from 1Gbps to 2Gbps. It will also quadruple the memory capacity for 4-Hi stacks from 1GB to 4GB. 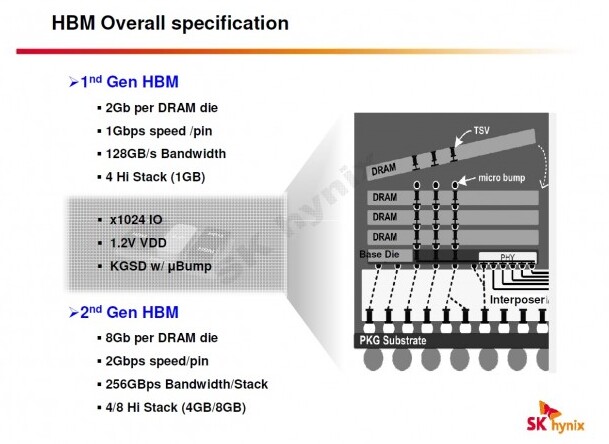 Reportedly HBM2 is scheduled to be featured in AMD‚Äôs upcoming ‚ÄúGreenland‚ÄĚ GPU [link]. It‚Äôs rumored that the new graphics family will be manufactured at Globalfoundries on their 14nm FinFET process node which would be a major loss for TSMC.

A summary of AMD graphics processor modules is shown below.

There are also reports that AMD is working on multicore APUs that will use similar interposer / HBM memory technology [link].

For all the latest on 3DIC and other advanced packaging, stay linked to IFTLE‚Ä¶

OmniVision, a supplier of CMOS imaging chips has entered into an agreement to be acquired by a Chinese consortium, which includes Hua Capital Management Co. for ca. $1.9 billion. The transaction is expected to close in the 3Q or 4Q 2016, if it receives necessary regulatory approvals including antitrust review in the U.S. and review and clearance by the Committee on Foreign Investment in the U.S. In order to obtain clearance or approval in Taiwan, OmniVision will divest certain of its investments, including certain of its interests in a Taiwan joint venture.

Speaking of players in the CMOS imaging sensor market, Yole recently updated their market look at these devices as shown below. While smartphones are still the main driver, there are a lot of other applications for these devices. 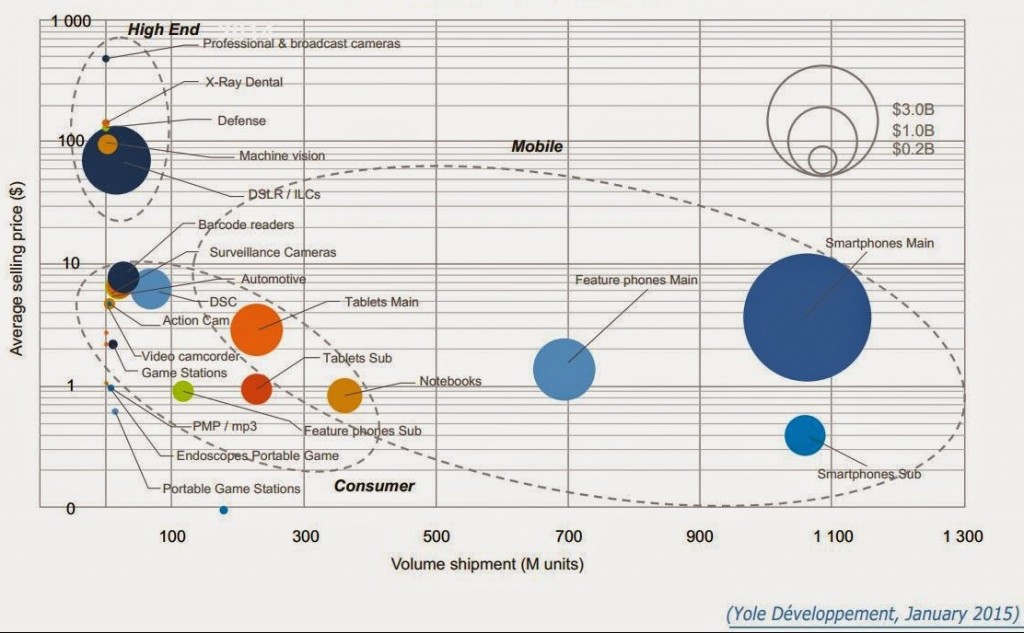 EyeVerify has developed Eyeprint ID – a highly accurate biometric technology for smart devices that delivers the ultimate in secure, private authentication. This patented solution uses existing cameras on mobile devices to image and pattern-match the blood vessels in the whites of the eye. Check it out at www.eyeverify.com.

Currently, a Fujitsu smartphone is using iris-recognition technology. The phone recognizes the unique pattern of the iris, which remains constant after the age of two and is difficult to forge [link]. That pattern is read by shining an infrared LED light on the eyes and taking an image of them with an infrared camera to acquire the iris pattern, which is registered and used to verify matches. 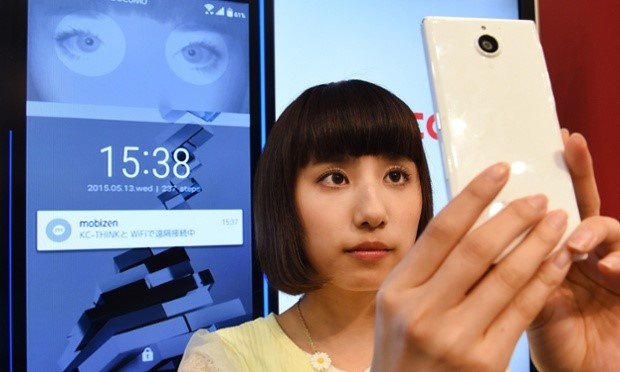 Fujitsu claims the technology will be faster and more accurate than face recognition. Because this uses ActiveIRIS from Delta ID, this system can be used at a normal smartphone viewing distance, rather than within the 10cm range that most existing iris recognition systems require. In standard photobiological safety testing, the infrared LED light was verified to be safe for the eyes. 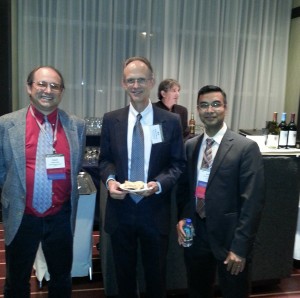 The RTI (Research Triangle Institute) 3D ASIP (Architectures for Semiconductor Integration & Packaging) Conference is the longest running 3D conference in the world. The 2015 conference will be the 13th in succession. There will be some important changes that I want to bring you all up to date on.

The General Chair for the last 12 meetings has been RTI employee Matt Mecray (see 2012 photo of Bob Patti, Matt and Arif Rahman) who a lot of you have gotten to know through the years. Many thanks to Matt for his efforts. Unknown to many of you is that Matt does not live at the RTI headquarters site in Research Triangle Park NC, but rather in Portland Maine. Yes that is the East coast town that received over 100 inches of snow this past winter. (talk to me about global warming sometime). Anyway, after leading us for 12+ years Matt is moving on to other activities at RTI and they have asked me to take over his general chair duties for this years conference which will be held Dec 15-17th. The conference will once again be held near the SF airport (site to be chosen soon).

What in the past has been called ‚Äúthe preconference symposium‚ÄĚ will now be known reserved for special topic ¬†tutorials, one AM and one PM which will cover two 3D related topics that I hope will be of interest to our attendees.¬† The conference will be on the 16th & 17th of December. We are in the process of developing the program so if you have any thoughts on what you‚Äôd like to see included send them to me ASAP.

Rumors are that ASE has won the contract to package the S1 processors for Apple Watch using SiP packaging to reduce overall dimensions achieving the required compactness necessary in the watch [link]. Apple appears sold on the technology after implementing it last year in Apple WiFi chips and fingerprint recognition chips also packaged by ASE. Apple indicates they are ‚Äú…quite optimistic about the commercial potential of¬†SiP‚ÄĚ and ‚Äú…plan to build SiP devices into half¬†its iPhone 6S in the second half of 2015 and all¬† iPhone 7, which reportedly will¬†go on sale in the 3Q 2015.

In related activity, ASE announced that it will be spending $3-6B to double its SiP production capacity over¬†the next 3 years. [link]

TDK has been producing SESUBs internally for a little over a year, but has entered into this JV ‚Äú‚Ä¶to meet the anticipated increase in demand‚ÄĚ‚Ä¶and take advantage of ASE skills in the area of ‚Äú‚Ä¶assembly of IC packages, and ‚Ä¶ a world-class performance record in product testing.‚ÄĚ

Multiple chips can be embedded side by side to produce MCP /SiP products. Discrete components can be mounted on the top of the substrate. Since the copper layers that form the interconnect are defined by photolithography, their dimensions can be controlled to enhance thermal performance of the modules.

Below are examples of (A) Maxim Power Management Unit (PMU) Module and (B) Bluetooth module.

When we look at what‚Äôs going to happen in the Semiconductor industry in terms of consolidation the wild card is always China. It has been well publicized that China national policy is to acquire and grow in this area. China represents about one-third of the approximately $330 billion global IC market, however, domestic production supplies only 10 present or so of its demand.

China‚Äôs government policy ‚ÄúNational Guidelines for Development and Promotion of the IC Industry,‚ÄĚ which was released in June of 2014 calls for expansion and vertical integration of the domestic semiconductor value chain.¬† The Ministry of Finance, the Ministry of Information Industry (MII) and the National Development and Reform Commission support the targets of achieving domestic sales revenue of $56B by 2020 and reaching the technology level of international ‚Äútier 1‚ÄĚ companies by 2030 [link].

Initially, the government investment fund has about $20B. Over the next decade, however, most expect to see $100B¬† stimulation across the Chinese semiconductor ecosystem.

According to John Pitzer, managing director at Credit Suisse, speaking at the ‚ÄúWafers to Wall Street‚ÄĚ SEMI forum in San Jose, China‚Äôs intention to increase domestic semiconductor production represents the single most significant risk factor to U.S. semiconductor industry dominance [link].¬† He believes that significant intellectual property and R&D barriers will constrain China‚Äôs domestic technology development and mitigate some of the intensity of its domestic growth ambitions.¬† However, the accelerated policy-backed Chinese merger and acquisition activity and an active Chinese R&D university agenda presents a longer-term risk in the industry. Recall in IFTLE 222 we have discussed Chinese intent to become an acquisition ‚Äúpredator‚ÄĚ in microelectronics. 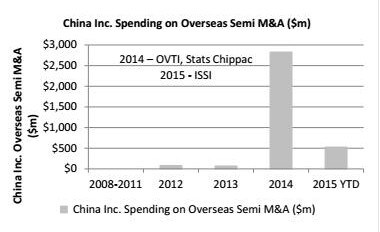 Pitzer noted that China is planning semiconductor industry investment of $170B in an attempt to reduce dependence on semiconductor imports. ¬†Potential M&A of U.S. companies appears to be a near-term theme. Consequently, he expects to see more Chinese companies collaborating with leading U.S. companies and more overseas M&A from China.

For all he latest in 3DIC and advanced packaging, stay linked to IFTLE‚Ä¶

Eighteen months after announcing a deal to Tokyo Electron, Applied Materials has announced that the $7B deal will not go through due to regulatory concerns [link]. The two companies said the decision for terminating the deal came after the U.S. Department of Justice told the companies that their proposals for a combined business were not good enough to replace the competition lost from a merger.

The Korea Times has also reported that ‚Äúthe Korea Fair Trade Commission (FTC) disapproved the proposed merger between Tokyo Electron and Applied Materials in line with the latest objections by Washington.‚ÄĚ

As IFTLE has mentioned many times in the past few years, the decline in the number of semiconductor firms that can afford to have their own chip fabrication plants has reduced the customer base for the industry.

The termination of AMAT-TEL merger will affect AMAT‚Äôs position in the etch and deposition equipment segments. Although Applied has a larger ¬†deposition market share (47%) than TEL (~12%), the new company, preliminarily named ETERIS, had opportunities to fill out its product portfolio by the merger. Applied is clearly behind in the deposition segment after LAM merged with Novellus in 2012 to gain a substantial presence in the segment. The Applied / TEL merger was expected to close the gap with LAM but now that will not happen.

Samsung Invests Big Samsung has announced a $14.7B plan to build a new wafer fab south of Seoul. ¬†Slated to begin production in 2H17, will add to Samsung‚Äôs current fabs (listed below) [link].

Samsung has spent at least $10 billion per year on semiconductor capital since 2010 and has accounted for 17-21% of total industry capital expenditures each year since then. 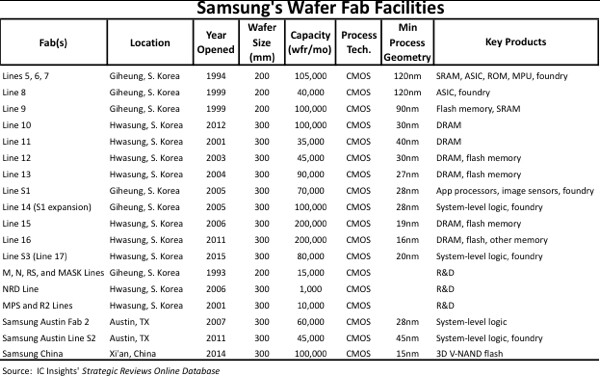 Samsung did not identify what type of chips will be manufactured at the new fab. Samsung is expected to give strong consideration to foundry operations at the new fab. ¬†Despite losing the Apple A8 processor business to TSMC (a $2 billion foundry customer), Samsung reportedly is committed to growing their foundry business. ¬†Its leading-edge manufacturing capabilities make it an attractive option for several fabless and fab-lite logic IC companies.

IC Insights reports that total production value of electronic systems increased 5% in 2014 to $1,488B. Cellphones expanded their lead over PCs (desktops and notebooks) as the largest electronic systems market in 2014 after overtaking standard PCs for the first time in 2013. 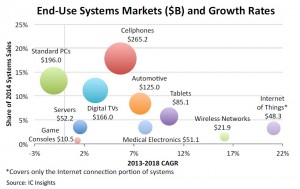 Cellular handsets accounted for 25% of IC sales in 2014, while standard PCs represented about 21% of the total. ¬†IC revenues generated by these 11 end-use systems categories represented nearly 80% of total integrated circuit sales worldwide in 2014. 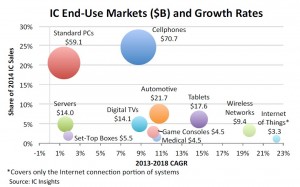