I‚Äôm delighted to turn the blog over again to Mike Czerniak, Environmental Solutions Business Development Manager at Edwards. A longtime champion of the environment, Mike, nominated by the UK Department of Energy and Climate¬ÝChange (DECC), was just been accepted as the ‚Äòexpert witness‚Äô on CF4 for the forthcoming Intergovernmental Panel on Climate Change (IPCC) working party on emissions of this extremely long-lived gas (50,000 years).

The World Semiconductor Council (WSC) is comprised of the semiconductor industry associations (SIAs) of the United States, Korea, Japan, Europe, China and Chinese Taipei. Its goal is to promote international cooperation in the semiconductor sector in order to facilitate the healthy growth of the industry from a long-term, global perspective. Formed in 1996, the WSC early on recognized the industry‚Äôs obligation to responsibly manage its impact on the environment.

One of the council‚Äôs first acts was the issuing of a voluntary industry target to reduce the emission of perfluorinated compounds (PFC) to 10 percent below their 1995 levels by 2010. PFCs are significant greenhouse gases (GHG) and many can persist for extended periods in the atmosphere. Given the significant growth of the semiconductor industry over this 15 year period, this was a very aggressive goal. By the end of the period, all member SIAs were able to report that they had met, and in many cases, significantly exceed the stated goal. This rather impressive achievement was accomplished by two key efforts. The first was the replacement of traditional CF4 and C2F6 CVD cleaning gases with NF3, which readily dissociates in a plasma to provide fluorine, an effective cleaning gas, which, though toxic, is not a greenhouse gas. The second was the widespread adoption exhaust gas abatement. 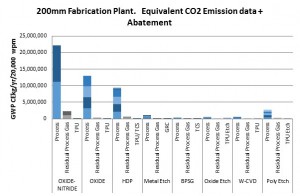