Last week, we started tearing down the Apple iPhone 5S. There has been much speculation that Apple would be moving their processor chips over to TSMC, but I think that we can now decisively say that this has not occurred – they have migrated to 28nm, but still at Samsung. 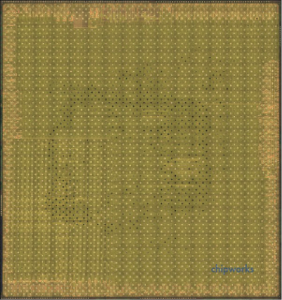 Earlier in the day last Friday we established from the look of the die that the A7 was manufactured by Samsung. In the meantime our guys have been grafting away in the lab, and came to the āboringā conclusion that the chip looked exactly the same as the last one.

The devil is in the details, however, and we have to do some measurements to see the difference.

Below is a SEM image of a cross-section of a group of transistors in the A6 (APL0598) chip, fabbed in the Samsung 32nm high-k-metal gate (HKMG) process.Ā  For convenience we have measured ten, so the dimension of the contacted gate pitch is 123nm. 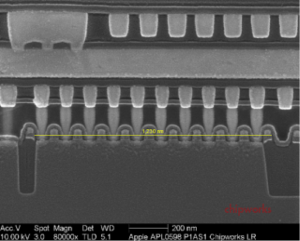 Now if we look at a similar image of the A7 (APL0698) below, and we see that the contacted gate pitch is 114nm. So, even allowing for measurement error (we figure +/- 5%), weāre pretty sure that we see a shrink, and that the A7 is made on the same process as the new Samsung Exynos 5410, the 28nm HKMG process. 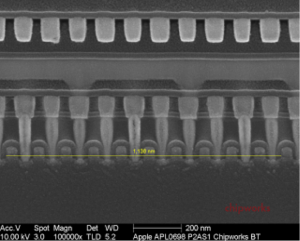 That doesnāt sound much, a mere 4 nm, but again if you do the math and rememberĀ  that weāre talking area shrink, not linear dimensions, then 28^2 divided by 32^2 (784/1024) comes out at about 77 percent of the area for the equivalent functionality. Or, given that the A7 is 102 mm^2 compared with 97 mm^2 for the A6, more functions in a slightly bigger area.

Below is a delayered sample of the A7, but we have yet to identify what that functionality is, something that we will be doing in the next few weeks. 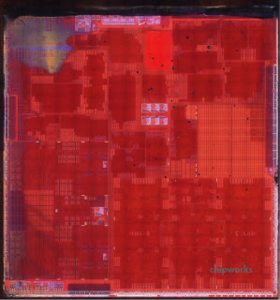