As usual, within days of the August 19 launch of the Samsung Galaxy Note 7, we had it in pieces and hadÂ identified most of the significant components that were inside. 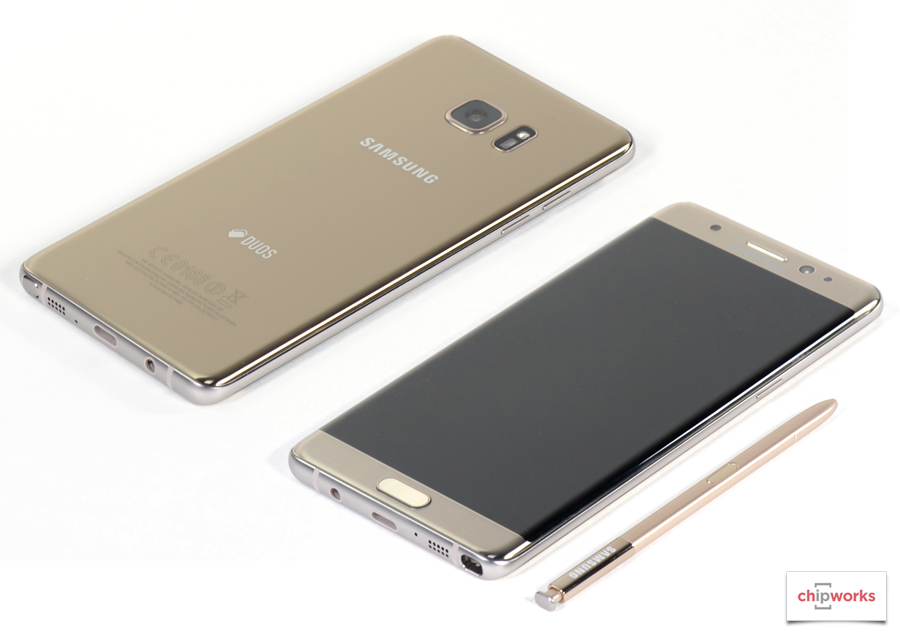 The application processor that drives our phone is the Exynos 8 Octa (Exynos 8890), similar to the Galaxy S7 and S7 edge. It has an eight-core CPU, with four Samsung-designed M1 cores that can run at 2.3 GHz, and four ARM Cortex A53 cores operating at up to 1.6 GHz. The graphics side of the chip uses an ARM Mali-T880 MP12 GPU (with 12 graphics cores). It has a LTE Category12/13 modem and is made with their latest 14LPP finFET process. 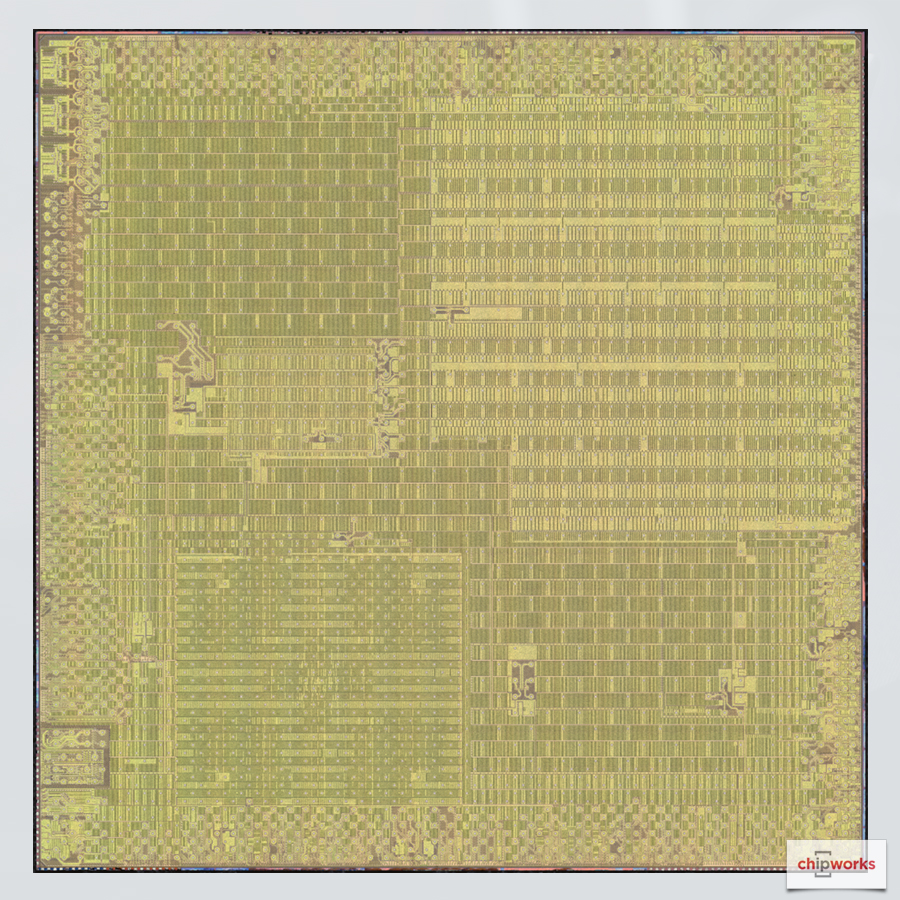 Stacked on top of the CPU in the usual package-on-package (PoP) stack, is 4 GB of Samsung LPDDR4 SDRAM. Now that we have 20 nm DRAM processes, the dies are small enough that they are packaged in a 2 x 2 x 2 configuration. Here is the plan-view X-ray image showing the wire bonding of the memory chips. The four stacks of two 4-Gb memory dies are mirror-imaged, on both the vertical and horizontal axes. 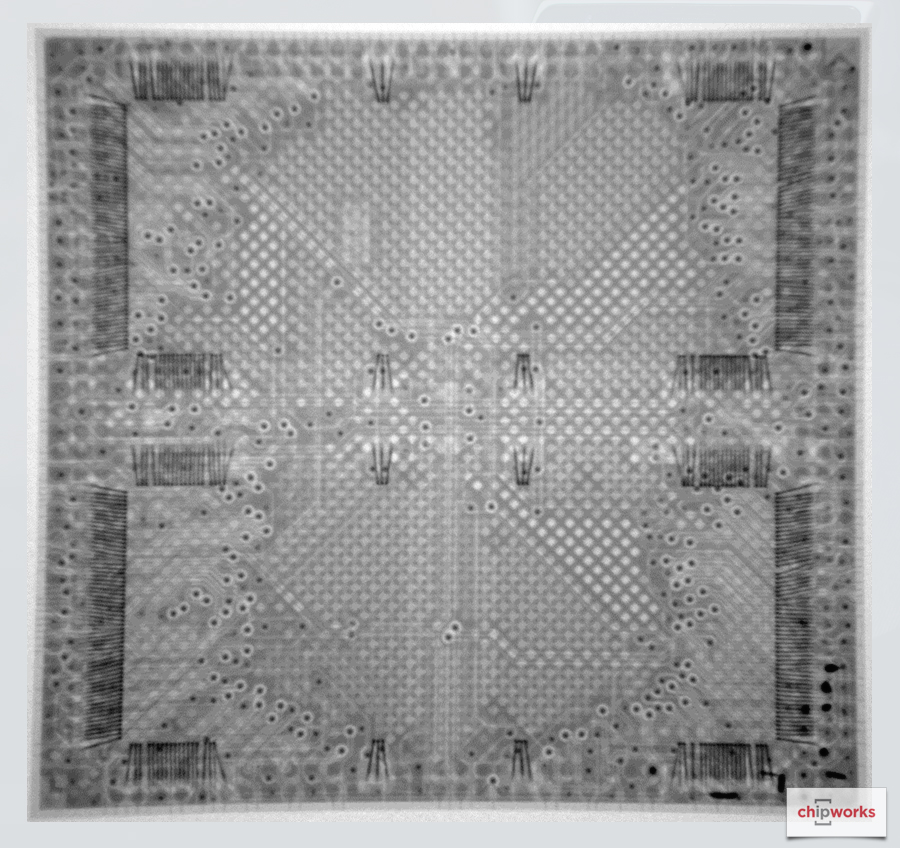 The dies are just about square (5.4 x 5.1 mm); the use of two-die stacks reduces the package thickness to 0.5 mm. This may be the first time we have seen this particular layout.

The 64 GB of flash memory was supplied by a Toshiba THGBF7G9L4LBATR UFS 2.0 part, fabricated using the latest 15 nm generation process.

There are three cameras in the Note 7: the usual front- and rear-facing units and an extra one for the iris-scanning security feature of this phone. The main camera is 12 MP with optical image stabilization (OIS) provided by a STMicroelectronics L2GIS 2-axis gyroscope, the middle chip in this picture: 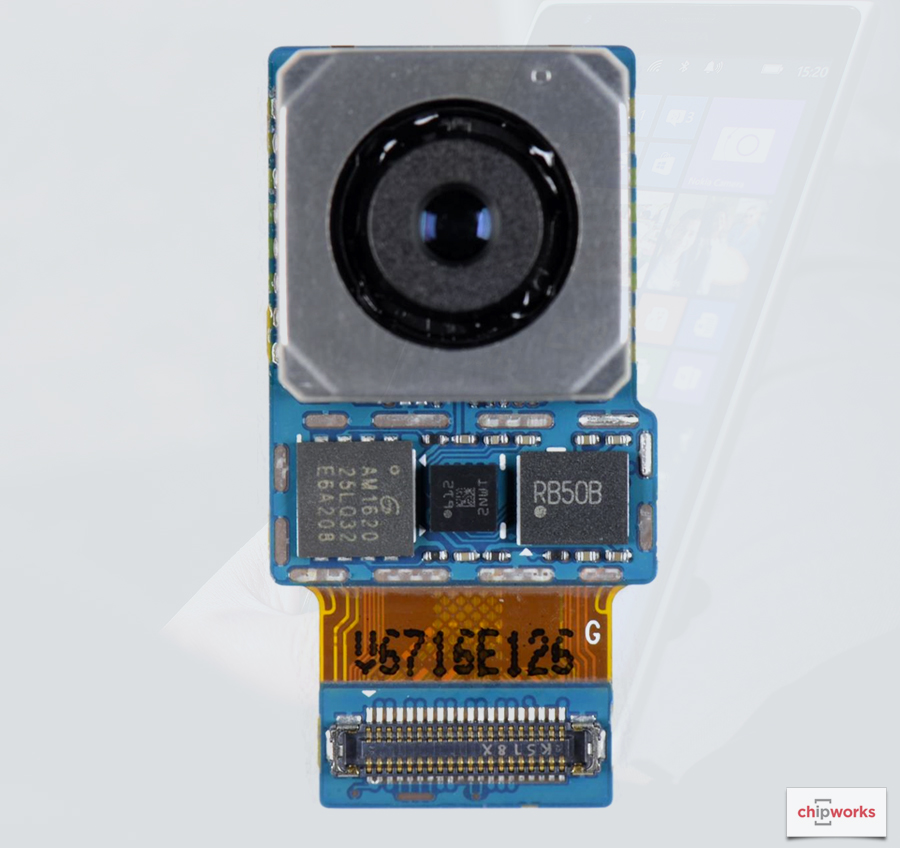 The selfie camera is a 5 MP Samsung part and the iris scanner is also Samsung-made, but we have not yet characterized it as to size and technology. 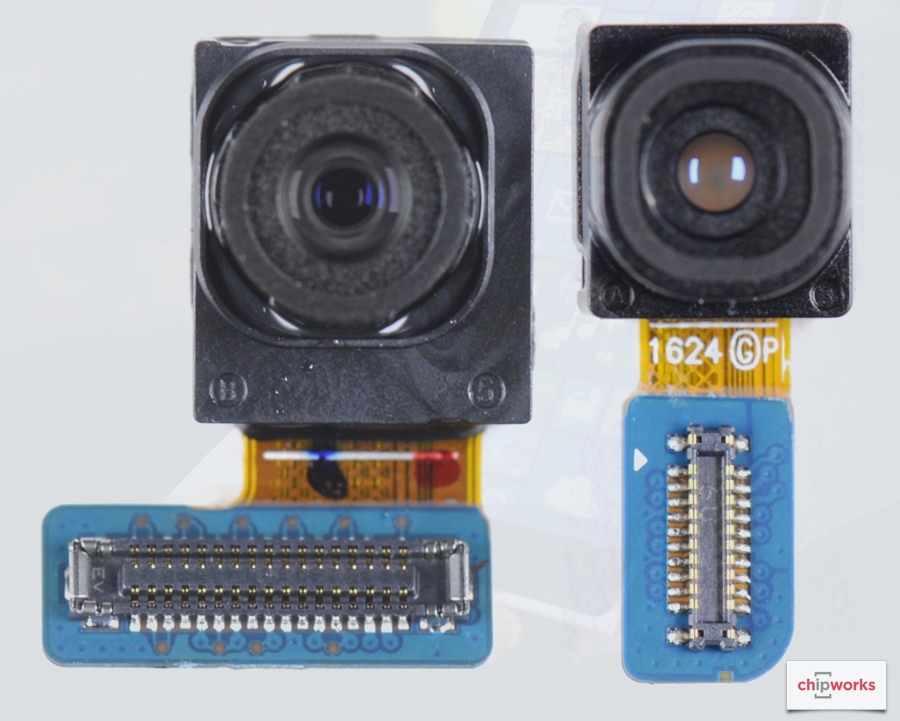 STMicroelectronics supplies all the MEMS motion sensors in the Note 7. In addition to the OIS sensor, there is a LPS25HB pressure sensor and a LSM6DS2 6-axis gyroscope/accelerometer module. All of these have many design wins in phones and wearables. 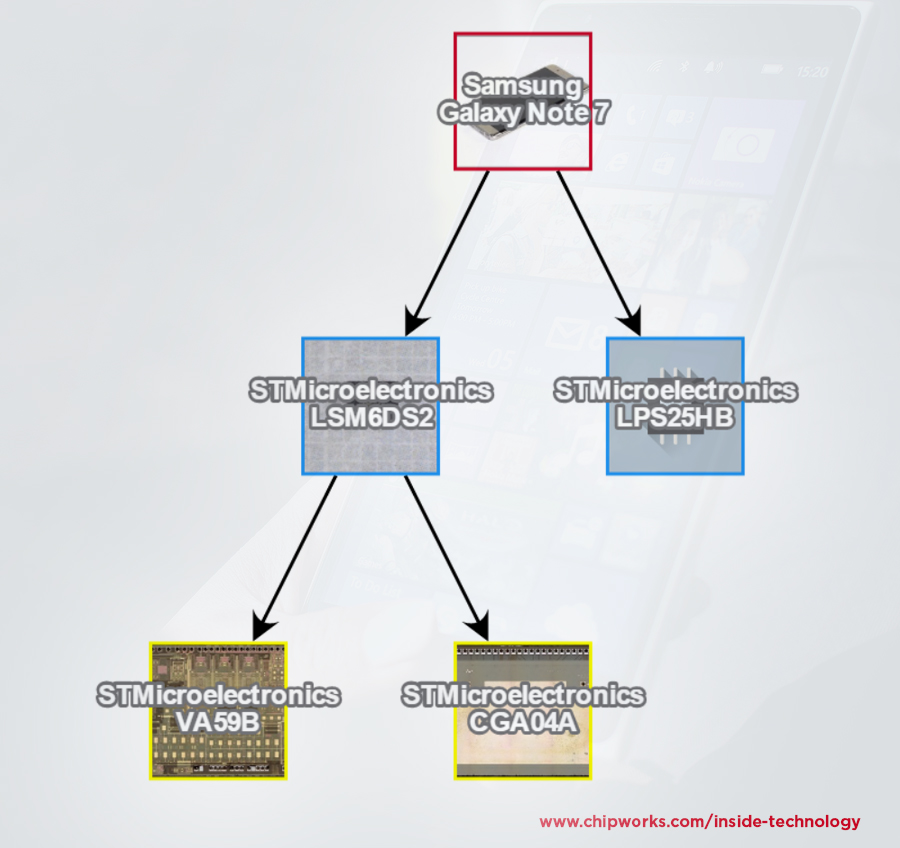 The RF front end in a phone these days is a very complex thing. The connectivity specification covers a multitude of bands (2G, 3G, 4G LTE-A), as well as Wi-Fi (802.11 a/b/g/n/ac), Bluetooth v4.2, GPS, A-GPS, GLONASS, BDS, GALILEO, NFC, and wireless charging. Â Itâ€™s no wonder that we have quite an inventory of parts in that area of the phone:

The touch control function seems to be distributed in the Note 7, possibly since we also have the S-Pen capability. There is a Cypress CY8CMBR3145 CapSenseÂ® Expressâ„˘ controller, a Samsung S6SY661X, and a Wacom W9018 digitizer, which apparently assesses the different pressure levels applied by the S-Pen to the screen. 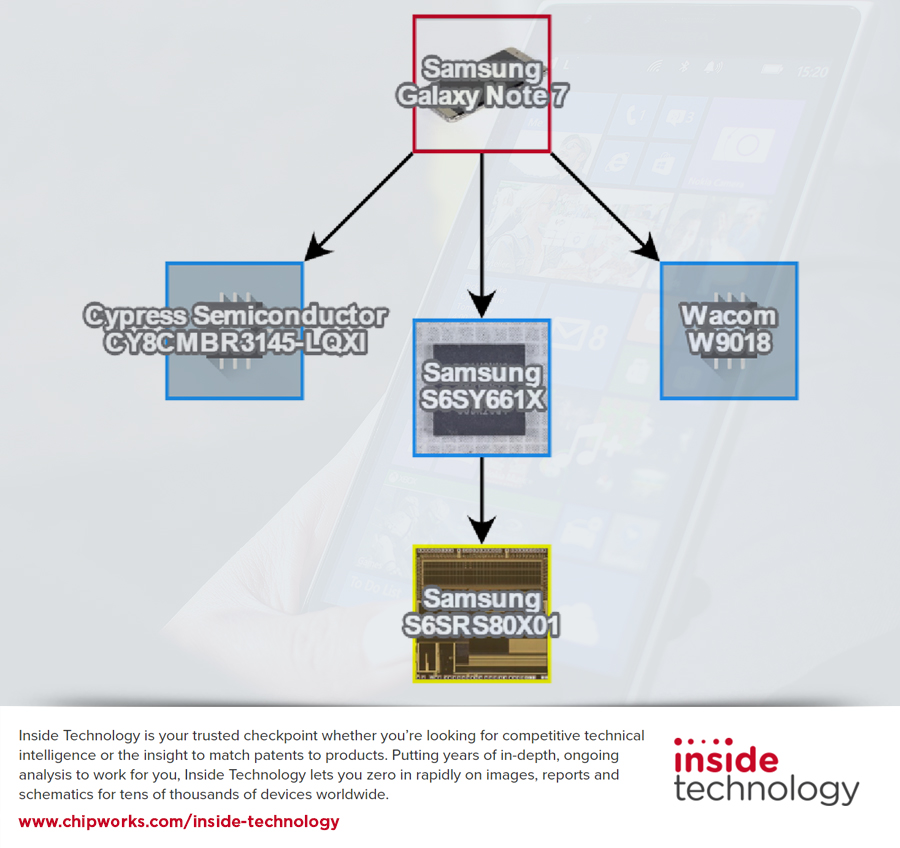 As with every other smartphone, there are multiple power management ICs (PMICs), in this case five:

And what about the batteries?

Itâ€™s now well known that, due to some phones exploding or catching fire while being charged, Samsung has launched a recall of the millions of Note 7s already shipped. On their UK website, they clarified that â€śAn overheating of the battery cell occurred when the anode-to-cathode came into contact, which is a very rare manufacturing process error.â€ť In other words, something in the battery shorted out, likely because a separation membrane within the battery was defective.

The problem takes me back to the New Year (after Christmas), when there was a spate of hoverboards catching fire â€“ they also use lithium-ion (Li-ion) batteries, only bigger. As a consequence, K.M. Abraham of Northeastern University published a useful explanation of what happens when Li-ion batteries fail.

â€śIt is safe to say that these well-publicized hazardous events are rooted in the uncontrolled release of the large amount of energy stored in Li-ion batteries as a result of manufacturing defects, inferior active and inactive materials used to build cells and battery packs, substandard manufacturing and quality control practices by a small fraction of cell manufacturers, and user abuses of overcharge and over-discharge, short-circuit, external thermal shocks and violent mechanical impacts. All of these mistreatments can lead Li-ion batteries to thermal runaway reactions accompanied by the release of hot combustible organic solvents which catch fire upon contact with oxygen in the atmosphere.

We can calculate that the 41400 Joules of heat will raise the temperature of the 46 gram cell by 900 Â°C under adiabatic conditions if a short-circuit or another event causes a thermal runaway reaction. That means that if an 18650 Li-ion cell operating at 20 Â°C short-circuits its temperature under adiabatic conditions can rise as high as 920 Â°C.â€ť(!!)

Note the â€śCell Made in China, Assembled in Vietnamâ€ť on the battery. Out of curiosity, we checked out the iFixit teardown of the Note 7, and noted that their phone had a different battery (right). 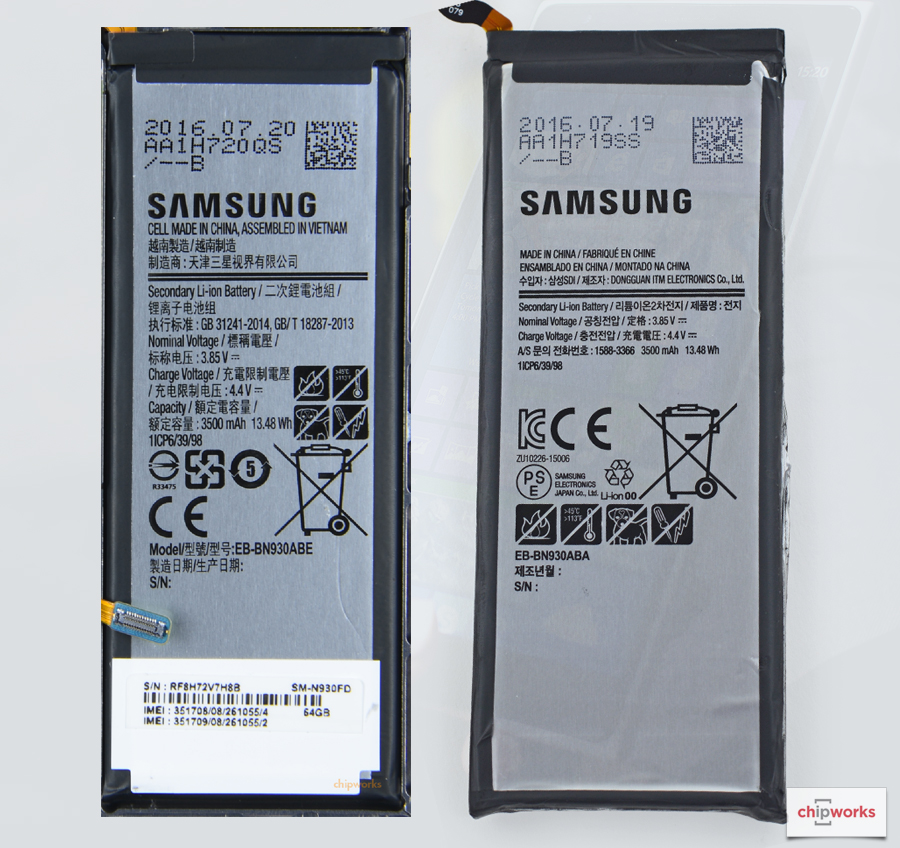 The iFixit phone reads only â€śMade in Chinaâ€ť, so there are two battery sources. If you look closer, model EB-BN930ABE (left) is from Vietnam, and model EB-BN930ABA (right) is the Chinese version.

The whole issue is further complicated by the non-removable nature of the batteries in the phone, necessitating a full recall. Unfortunately, we can no longer send ours in to get it replaced!