Before we take our first look at IMAPS 2016, letâ€™s first look at some recent merger announcements and rumors which continue unabated.

Despite the recent approval by Taiwanâ€™s Fair Trade Commission the proposed merger between ASE and SPIL continues to be reviewed by anti-trust authorities in China and the US. It is reported that it is unlikely to gain approval from the two major markets until the end of 2017. [link] ASE and SPIL agreed to merge through the formation of a parent holding company. The holding company would own ASE and SPIL.

As we discussed in IFTLE 306 [â€śQualcomm acquisition of NXP ?…â€ť] , Qualcomm agreed to acquire NXP Semiconductors for $38.5 billion. This will give Qualcomm a presence in the chips for smart cars market.

Siemens and Mentor Graphics announced that they have entered into a merger agreement under which Siemens will acquire Mentor for $4.5B. Siemens is acquiring Mentor as part of its Vision 2020 concept. Mentor is expected to complement Siemens offering sin mechanics and software with design, test and simulation of electrical and electronic systems. Mentor is generally viewed as a global leader in IC design, test and manufacturing; electronic systems design and analysis and automotive electronics. The deal will boost Siemens software revenue by about a third.

Samsung Electric has announced it will acquire Harman Int for $8B. Harman is best known for making car audio systems such as Harman/Kardon and JBL. Samsungâ€™s interest is in Harmans â€śconnected carâ€ť business which supplies navigation services, onboard entertainment systems and connectivity to the rest of the world.

IFTLE hears that silicon interposers are still in short supply. Word is that Inotera has backed out of the business before they ever entered it. Recall ASE announced Inotera would be their supplier [see IFTLE 187 â€śâ€¦..ASE / Inotera 3DIC JVâ€ť]. So who will supply ASE now? Have they decided not to be a player in this market sector ?

If we look at who is really supplying, i.e. actually selling, silicon interposers (vs the lists put together by marketing companies that are pages long and include everyone who wants their names included) we are left with TSMC (per their CoWoS technology) and UMC who is supplying AMD. As Porkey Pig used to say in the cartoons I used to watch as a child â€śThatâ€™s All Folks!â€ť 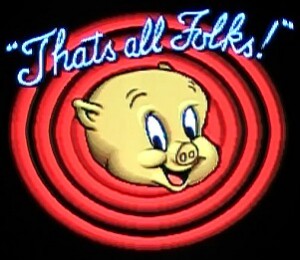 Is there any wonder why 2.5D is struggling to take off with only these two suppliers in the infrastructure? 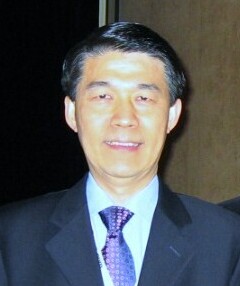 Rumor from Taiwan is that TSMCâ€™s Douglas Yu was promoted to VP based on the success of InFO. Note that Doug was also responsible in a large part for the commercialization and success of CoWoS. As IFTLE has stated before, Doug, who earlier in his career was responsible for on chip interconnect scaling, was moved to packaging and has been a real driving force there.

Rumors persist that TSMC will license their InFO technology to 1-2 OSATs when their current fab is near sold out. IFTLE hears that Amkor is pursuing this licensing aggressively.

The IMAPS 49th Int. Symp. on Microelectronics was held in Pasadena CA in October. For the next few weeks weâ€™ll be looking at some of the key presentations from that conference.

Amkors Huemoeller certainly gave toe most relevant keynote â€śCreating Semiconductor Value through Advanced Packagingâ€ť. Nothing could be more in line with the theme of IFTLE for the past 6 years than the focus in the semiconductor industry shifting from the front end to packaging.

Huemoeller points to the fact that tier two OSATS simply do not have the scale or liquidity to invest what is needed to stay on the leading edge. He indicates that an investment of > $500MM / yr is required to just sustain current business. 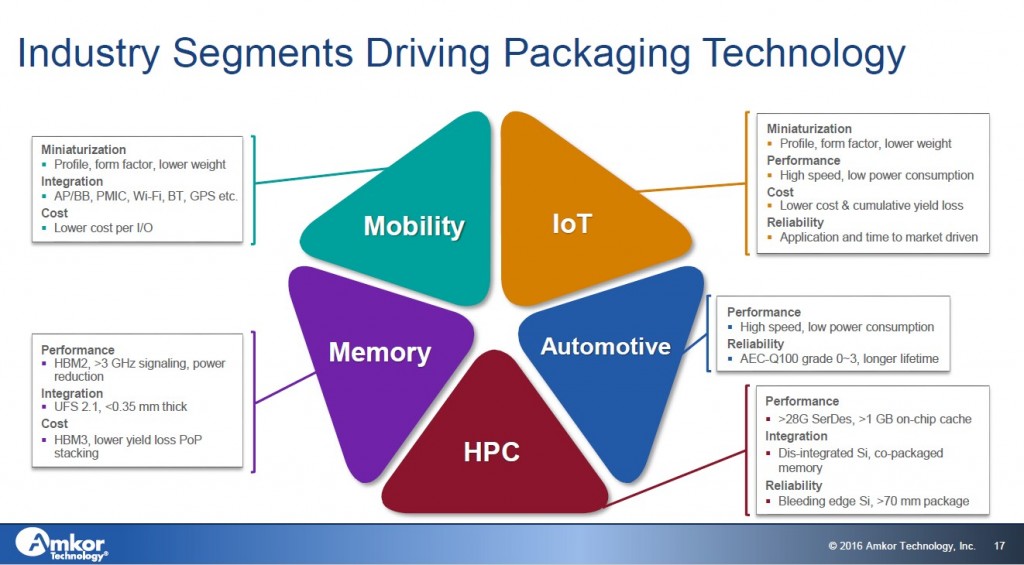 And lists the following as the â€śBig 5â€ť packaging platforms: 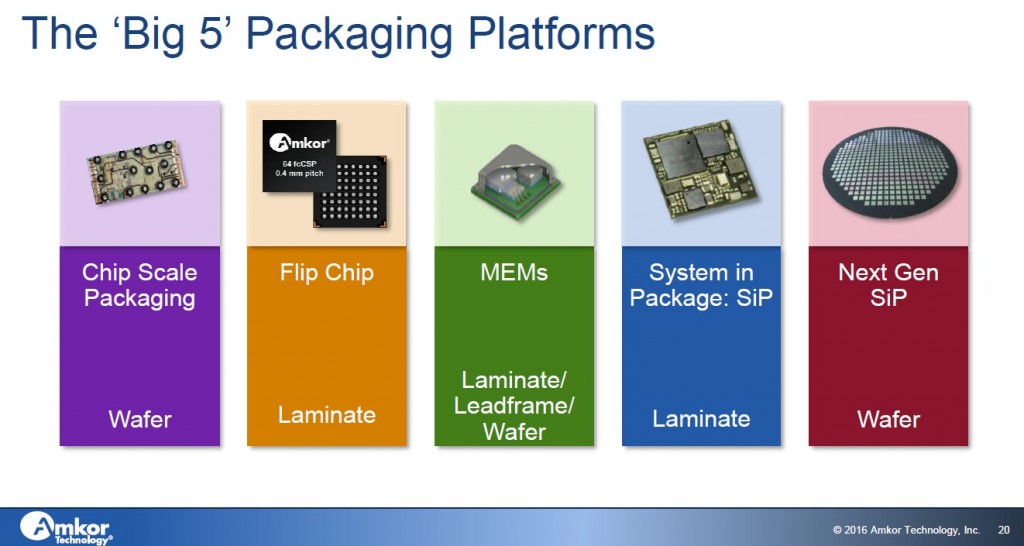 We all know about the sensors in smartphones , but probably not the extent of sensors coming in automobiles: 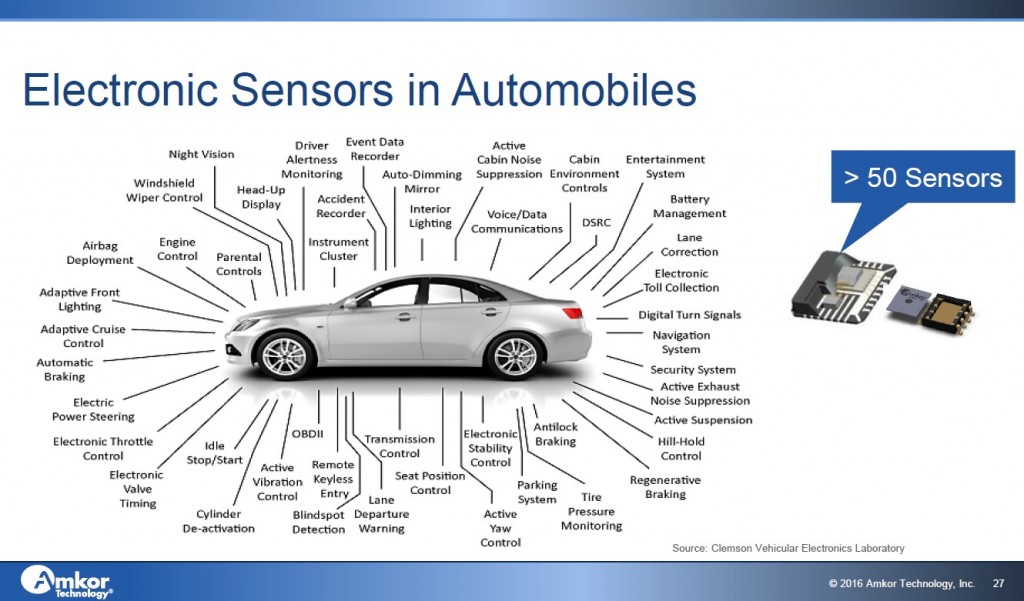 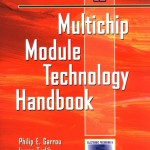 SiP are basically todayâ€™s generation of what we used to call Multichip Modules in the 1990s. Amkor sees them requiring state of the art technology and driving heterogeneous integration with and without sensors.

Huemoeller sees the next gen of MCMs (or SiPs) being wafer based, since they will provide the best performance (power, electrical and thermal) and the thinnest form factor.

The following chart show how they see fan out packaging evolve into advanced SiP. 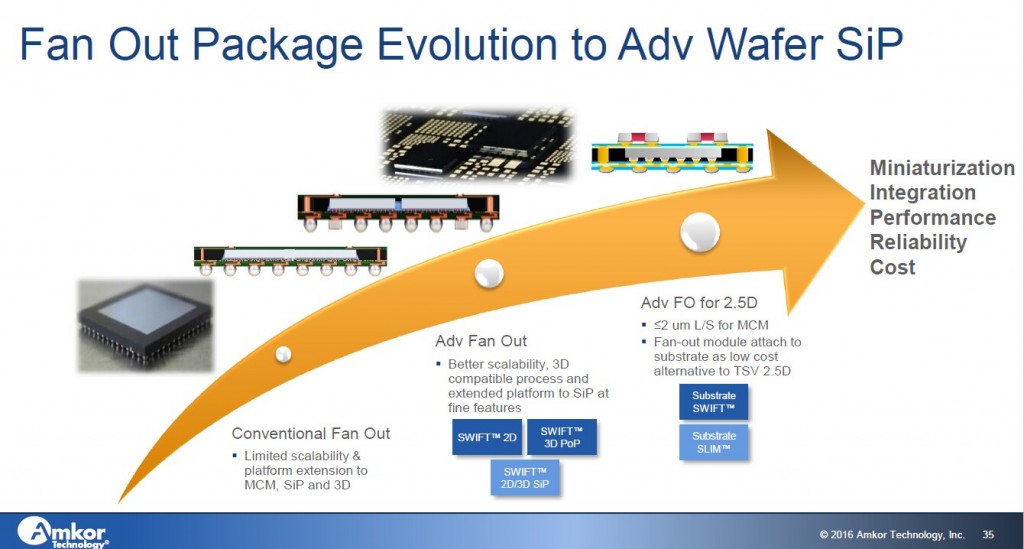 Continuing our look at advanced packaging activity at the 2016 Semicon Taiwan. This week we finish our overview of Semicon Taiwan 216 with an examination of presentations by TSMC who as we all know is making a major push into the high end packaging market.

Doug Yu discussed TSMC packaging solutions which are summarized below: 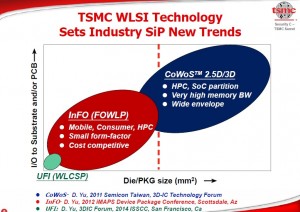 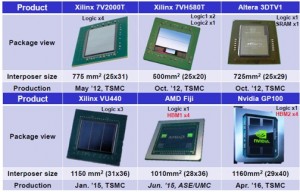 Multichip InFO vs multichip FC CSP are compared below:

Shang Hou of TSMC discussed interposers past, present and future.

Hou compared the TSMC CoWoS TSV based interposer technology to TSMC InFO fan out packaging in the slide below. The first gen CoWoS started in 2012 with 28nm logic chips. The industryâ€™s first 16nm network processor was built with CoWoSÂ® in (2014). CoWoS delivers faster time-to-market by eliminating the node-dependent CPI seen in conventional packages. 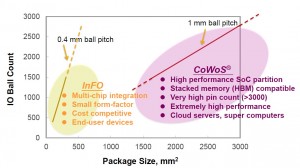 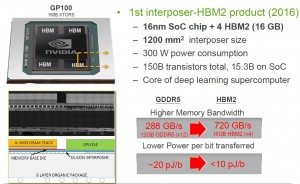 Volume is by far the No.1 factor in the cost equation

Interposer high intrinsic cost is unavoidable compared with flip chip. The key is whether it has sufficient value to justify the cost?

For all the latest on Advanced Packaging stay linked to IFTLE…

Continuing our look at advanced packaging activity at the 2016 SEMICON Taiwan. This week letâ€™s look at some presentations that focused on TSV based packaging.

Mike MA of SPIL reviewed the status of TSV in IC Packaging. His summary of current TSV usage is shown below:

SPIL currently doing 40um pitch on their ubumps as shown below.

SPIL is a proponent of the so called â€śchip on wafer lastâ€ť process flow as shown below: 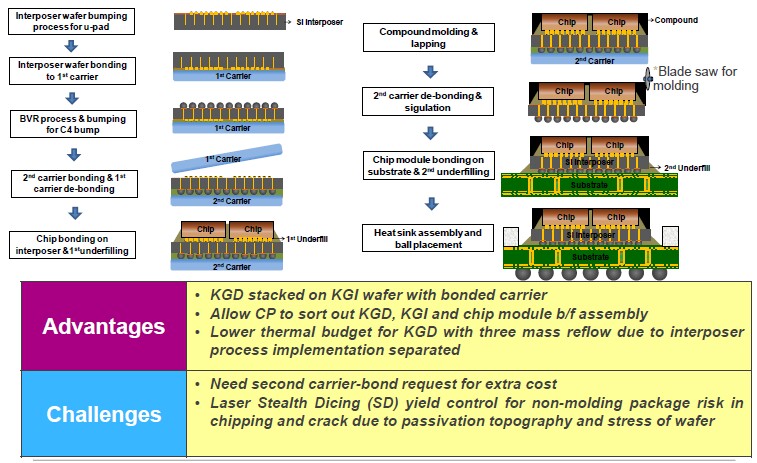 Other interesting comments by Ma include:

â€śFan out packaging is capable of 2um L/S x 2 layers, but larger package size (> 15 x 15mm sq) will be challengingâ€ť 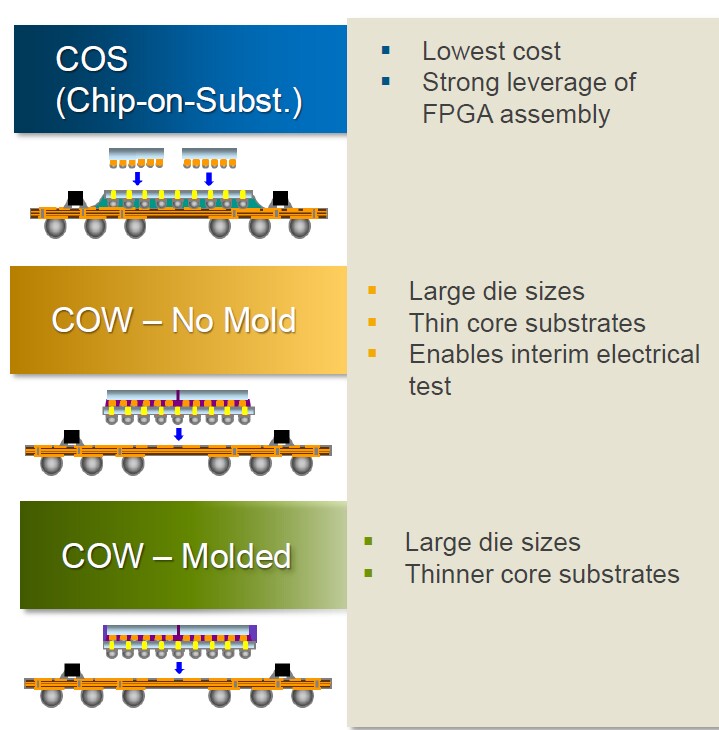 He compares the CoS to the CoW process below:

In the CoW Process, there are no warpage risks in top die attach on interposer regardless of die size. 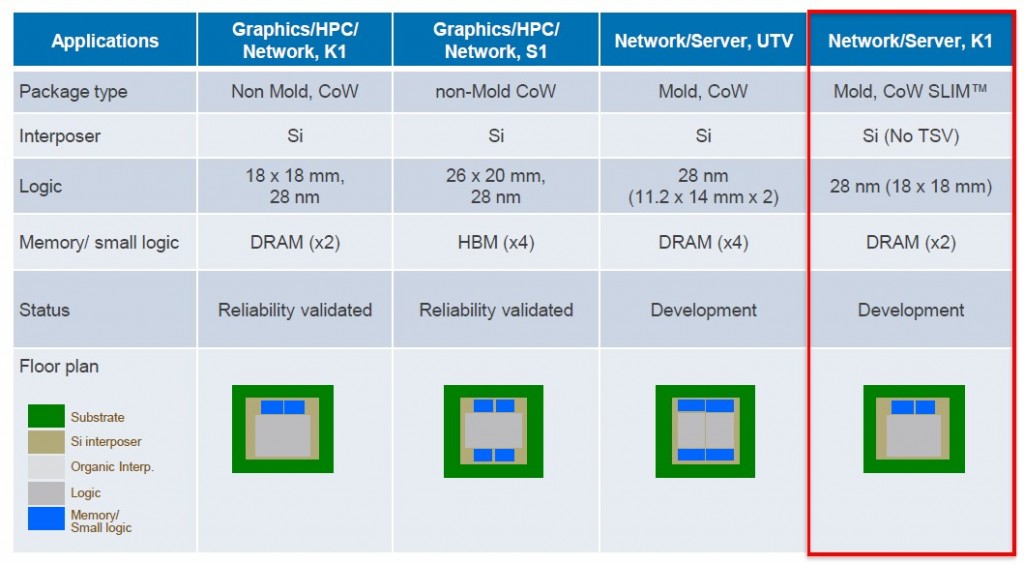 For those looking for a good comparison of Samsung vs Hynix stacked memory cross sections, Wimplinger of EVG offered us the following figure and table comparing the two. 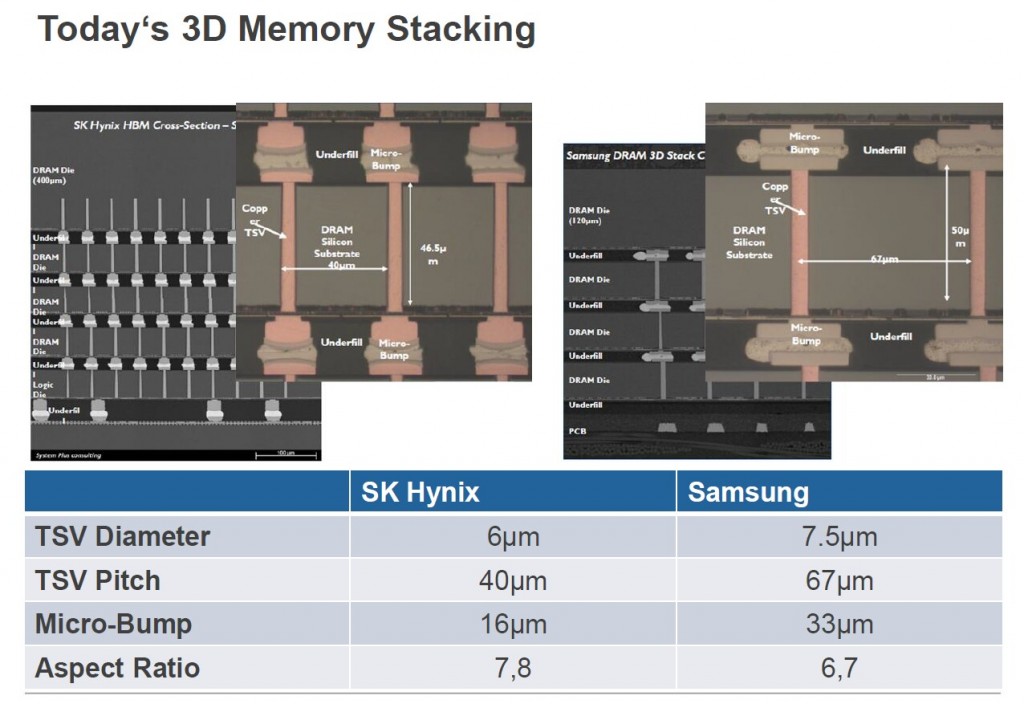