I normally donâ€™t have the time to follow local press, but occasionally Google Alerts pops up with something quite interesting. In this case, the Albany Times Union from Albany, New York had an intriguing headline that supports some of the gossip around Appleâ€™s fabrication plans for their A-series processor chips, up to now fabbed by Samsung.

At least in the short term, and from a technology point of view, this makes a lot more sense than Appleâ€™s much-vaunted switch to TSMC, since GLOBALFOUNDRIES (as part of the Common Platform alliance with Samsung) uses a gate-first HKMG process rather than TSMCâ€™s gate-last strategy. In fact, a couple of years ago GLOBALFOUNDRIES and Samsung announced that they were synchronizing their fabs so that customers could transfer products from one foundry to the other without the pain of redesign.

At the 20-nm node it might be different story, since all the foundries will be using gate-last processes; I can see TSMC picking up some of the business then, and there are persistent rumours of Apple trial lots going through TSMC.

It also makes sense that GLOBALFOUNDRIES would make a pitch for the Apple work, since they are hungry for customers, and if they can get in at the 28-nm node they will be well positioned for 20-nm products in the next A-chip generations. Apple business would also help fill the potential second fab for which they have obtained outline planning permission in the Luther Forest Technology Campus.

When it comes to the processes, the 28-nm samples that we have seen from GloFo and Samsung are remarkably similar; this is a SEM cross-section of the transistors and first-level metal in the Rockchip RK3188 that Ajit Manocha announced at Semicon West: 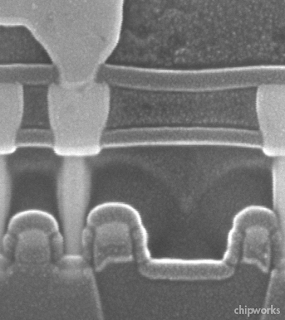 Now letâ€™s look at a similar section out of a Samsung Exynos 5410 appâ€™s processor: 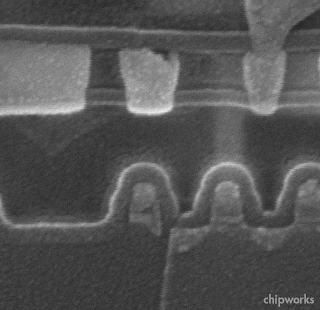 There may be some very subtle differences that show up in very detailed analysis, but essentially they look pretty close; the fab synchronizing looks good to me!

So the Times Union report may be just a blog rumour, but given the apparent compatibility of the two processes, it has the whiff of authenticity, and we may see A7s out of New York State in the not too distant future.

Now, if we get one into Chipworks, can we tell the difference?