The IMAPS National meeting was recently held in Orlando, FL. Letâ€™s first take a look at some of the materials papers that were presented.

Namics presented their latest data on available underfill solutions for 2.5/3DIC. Below we see several opportunities for epoxy underfill materials. 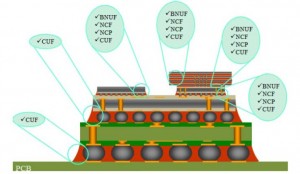 Vacuum underfilling is replacing CUF due to decreased voiding which improves reliability. Underfill must have a high enough Tg to insure the modulus is high enough to protect bumps during thermal cycling but low enough not to crack the die.

Namics proposes that in the near future it might be possible for substrate suppliers to apply a B staged underfill prior to shipping. The customer would then perform a thermo-compression bond.

Despite the obvious benefits, the drawbacks of both NCP (non conductive paste) and NCF (non conductive film) at present include required additional capital, cost more and have a longer bonding time. 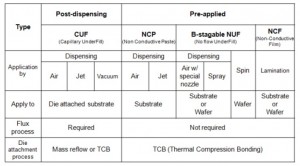 Traditional transfer molding Â has been challenged to mold 2.5/3D stacked die structures since these structures have limited space for resin flow. It is also difficult to transfer mold large wafer or panel substrates.

Compression molding was developed to mold packages with minimum resin flow. The blue layer, in the figure below , is a release film which is sucked down flat to the mold. A vacuum is subsequently pulled to remove air, gas and moisture from the cavity and molding cmpd.

BCB has been commercially used by the packaging community for more than 20 years. Although it has various superior properties such as low curing temp, low water absorption and low dielectric constant, being a thermoset resin, toughness and elongation are not one of them.Â  A toughened BCB has been a â€śholy grailâ€ť in the BCB user community.

A new toughened BCB product has now been described by Dow. Comparative properties are shown below. As one can see most properties have been maintained while elongation has been improved 3X and shows a 2X increase in fracture toughness from 0.3 to 0.4 to 0.6 â€“ 0.9 MPa m1/2Â  vs standard BCB.

A cross section of a via in this toughened BCB is shown below. 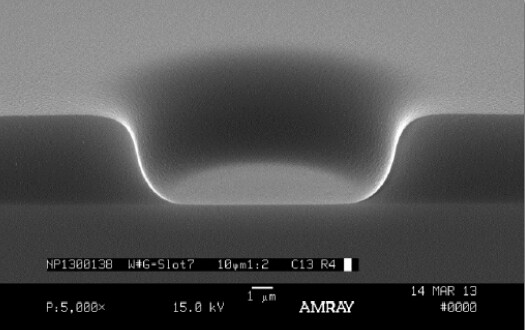 It was 2008 when the Handbook of 3D Integration was published by Wiley VCH. Â Since then it has been the most referenced 3D treatis on the market. Much has happened since 2008 and we, the editors, felt that rather than update the first two volumes , we would rather issue further volumes updating some chapters and adding others as required and Wiley VCH agreed. 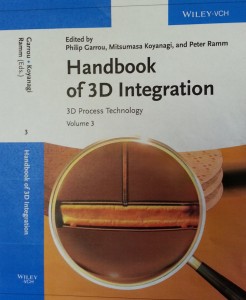 Many of us can recall 2008 when Toshiba commercialized the first CMOS image sensor with TSV last /backside. We called these the first 3DIC products, when in reality they were only 1 layer devices.Â  More recently we have discussed Sonyâ€™s plans to release CMOS image sensors where the circuitry and sensors are fabricated on separate wafers and joined by TSV â€“ i.e. true 3DIC structures. [see IFTLE 112,â€ťTSMC Staffing up for 2.5/3D Expansion ; Semi 3D Standards; Sony shows off 3D stacked Image Sensorsâ€ť and IFTLE Â 137, â€śCMOS Image Sensor market updateâ€ť]

Somehow IFTLE missed detailing the actual product technology release of the Sony ISX014 (link) Â at the ISSCC earlier in the year. This is important enough in terms of 3DIC product introductions that we will cover it now.

The Sony ISX014 8MP sensor features 1.12um pixels and integrated high speed ISP.The pixel layer and logic layer part are manufactured as separate chips and stacked by using TSVs. Previously the pixel and logic circuit of Sonyâ€™s back side Â illuminated (BSI) CMOS image sensor were formed during the same fabrication process. This is compared below. 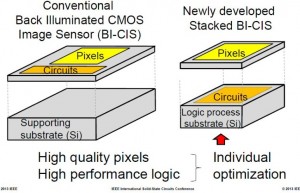 Actual layers are shown below: 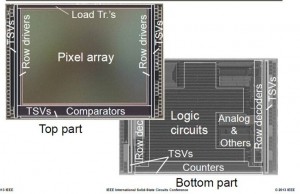 The stacked vs conventional technologies are compared below: 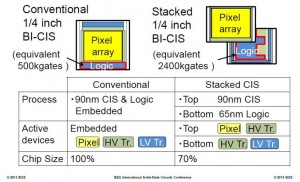 Since the logic chip can be manufactured at Si foundries, Sony does not have to invest in advanced logic process technologies.

Sony is in volume production of the new CMOS image sensor for its smartphone, other companiesâ€™ tablet computers, etc. The size, pixel count and pixel pitch of the sensor are 1/4 inch, 8.08 million and 1.12ÎĽm, respectively. Characteristics of the CMOS device are shown below: 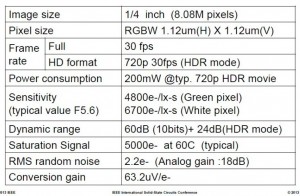 Sony has not disclosed details on TSV processing. The total number of TSVs is a few thousand. The following figure shows the stacked chips cross-section.The insulators of the upper and lower chips are attached together. It seems that TSVs are formed later to connect the circuit layers of the chips. IFTLE assumes they are using the Ziptronics oxide bonding technology that they licensed previously [ see IFTLE 65, â€śSamsungâ€™s 32GB RDIMM DDR3, GLOBALFOUNDRIES Packaging Alliance, Ziptronix Licensing Newsâ€ť. 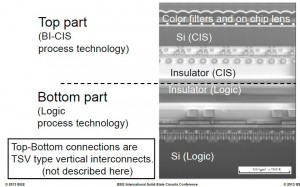 IFTLE would expect other CIS manufacturers to move in this direction shortly.

– Christmas coverage of Hannah and Madeline

The last of our looks at September 2013â€™s Semicon Taiwan.

Disco claims to have 73%of the edge trim business and 90% of the back grinding business. 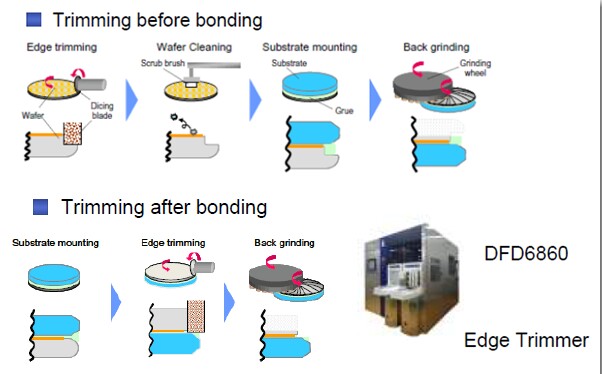 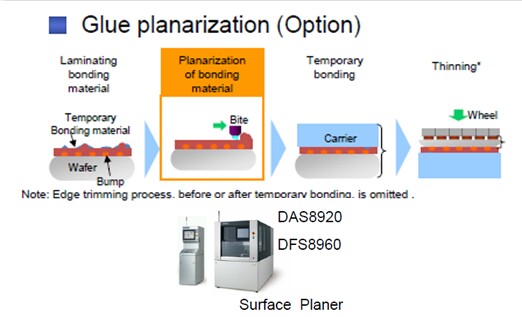 Cleanliness during the grind and CMP operations can be handled by integrated grind / CMP / clean units.

Namics gave an update on CUF underfills for 2.5/3DIC. The Namics roadmap for capillary underfill is shown below. 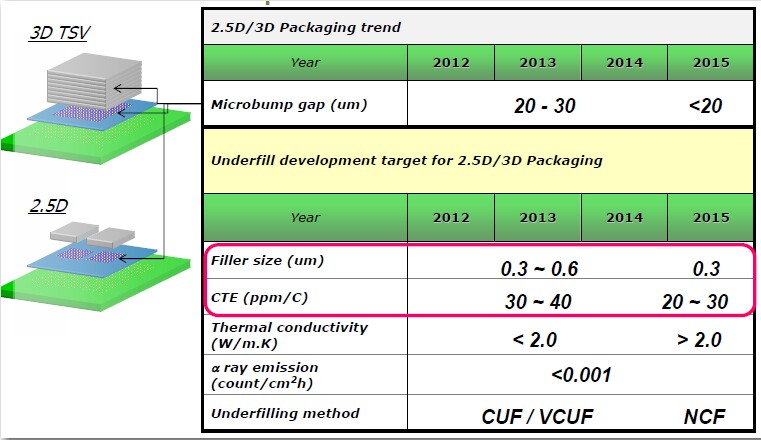 Only fine filler underfills can be used with TSV stacked packages. Higher filler loadings are needed to reduce filler CTE. 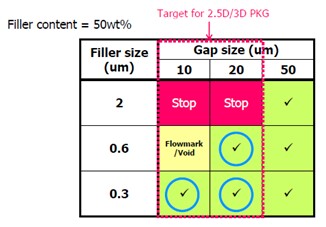 Higher thermal conductivity CUF can be made by increasing the filler content. 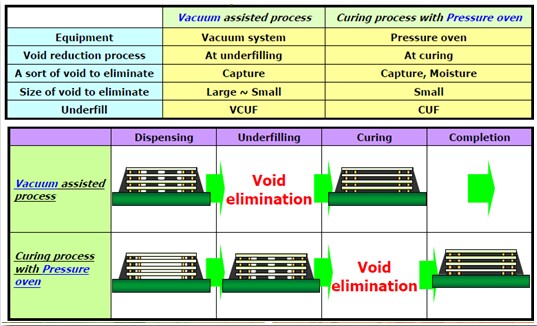 Choon Lee of Amkor gave a presentation on â€śFrom Advanced Packaging to 2.5D/3D.”

Lee showed the following example of converting a silicon interposer to PCB.