Monday afternoon at the 2012 IEEE International Electron Devices Meeting, IBM discussed their 22nm SOI high-performance technology [1], aimed at servers and high-end SoC products. To an extent, this is an extension of the 32nm process, using epitaxial SiGe for the PMOS channels and stress, and dual-stress liners for both NMOS and PMOS strain. However, there were a couple of surprises buried in there — at least for me!

The first surprise was that this is a gate-first process, contrary to the announcements made by the Common Platform group that the 20nm class processes would be gate-last. The difference seems to be that this technology IS aimed at high performance servers and their support devices, not consumer products, and this is IBMâ€™s process for its high-end products, so they are sticking with the proven formula and pushing it to the next level.

The gate dielectric stack has been scaled to reduce the inversion thickness (tinv) by 7%/10% (NMOS/PMOS), without affecting mobility, modifying the clean, depositions (using ALD for the interfacial oxide), and anneal steps to achieve the lowest tinv published so far, and reducing DIBL by 6%/8%.

The second surprise was that e-Si:C (embedded carbon-doped source/drains) has been used for NMOS stress — IBM claimed that this is the first time in a production process. I had just about written e-Si:C off as a viable manufacturing technique, since Iâ€™ve been hearing over the last few years that the carbon is not stable and does not stay in the substitutional crystalline sites where itâ€™s needed. However, here we are told that it is stable and that it survives all the backend processing, even with the 15 layers of metal used in this technology. 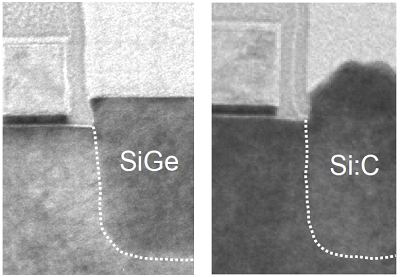 The e-Si:C incorporates ~1.5% C, which combined with fourth-generation e-SiGe with more Ge and the dual-nitride stress liners, gives 25% more strain than the 32nm process.

The embedded trench DRAM is not a surprise, IBM has a long history in the field and they have now brought it to the point where access time is shorter than SRAM [2, 3, 4]. 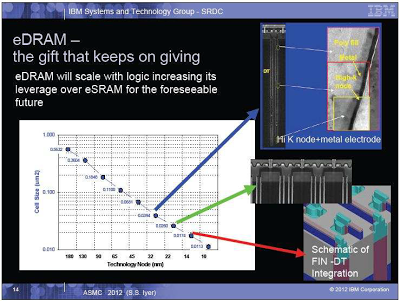 The big change here is that the substrate wafer has an N+ epi layer on it to replace the diffused cell plate of earlier generations. This allows denser packing, since a formerly-needed diffused spacer is removed, giving a cell size of 0.026 Î¼m2. It also enables deeper trenches, giving higher cell capacitance for an areal capacitance of 280 fF/ Î¼m2. The trench capacitors are also used as decoupling capacitors, and these are isolated by deep trench isolation so that they can be biased independently. 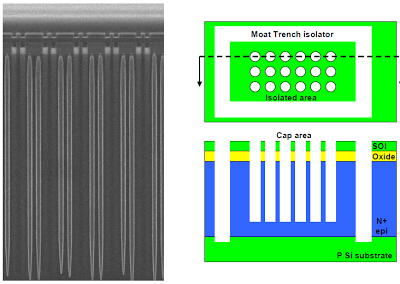 (As an aside, one of the comments from Greg Taylor of Intel in his microprocessor talk in Sundayâ€™s IEDM short course was that the analog functions that are part of a CPU are getting more significant as dimensions shrink. Both Intel and IBM are now using on-chip decoupling capacitors; Intel with MIMCAPs, and IBM with trench capacitors.)

The complexity of IBMâ€™s server chips is reflected in the 15 levels of metal. The first level is doubled-masked with a litho-litho-etch sequence to allow for orthogonal layout; the rest are single-patterned using uni-directional layout. Self-aligned vias help with packing, and both ultralow-k and low-k dielectrics are used as needed.

IBM is prototyping 22nm server parts right now, but even when they get into the servers for sale, I likely wonâ€™t get my hands on one — a bit beyond my procurement budget!

After launching their 22nm tri-gate high-performance logic product back in the spring, Intel have been promising to show off their SoC derivative, and yesterday was the day at the 2012 IEEE International Electron Devices Meeting. [1]

As you can see from Table 1, we now have six transistor options; the high-voltage transistors use a thicker gate dielectric stack (Fig. 1), and the gate pitch and gate lengths have been tuned to suit the end purpose, and of course there is some (unspecified) source/drain engineering. 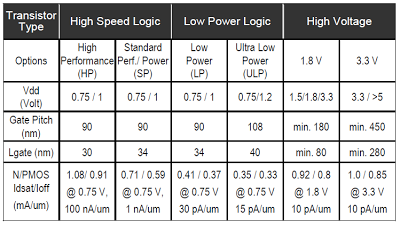 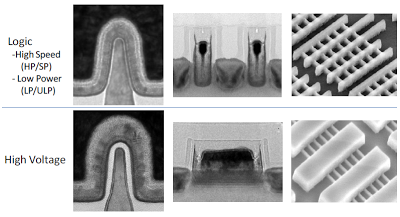 Fig. 1: TEM linear- and cross-sections of, and tilted SEM of, logic (top) and high-voltage (bottom) transistors [1]

If I read the paper correctly, the SoC process can incorporate up to twelve metal layers, with up to six 1Ã?? layers, and an extra 3Ã?? level, but only one 4Ã?? level Fig. 2). When it comes to the passives, the same MIMCAP layer is used as we saw in the CPU together with similar finger capacitors to the 32nm SoC; inductors are also formed in the 6Î¼m thick top metal; and there are precision resistors available. 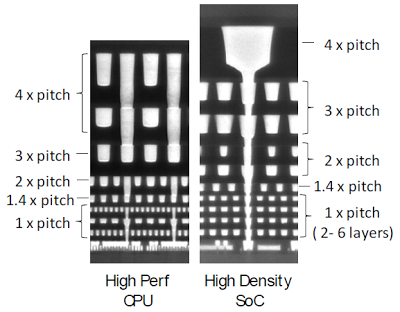 A bunch of SRAM cells are offered, both six- and eight-transistor varieties, with the 6T cells ranging from the minimal 0.092 to 0.13 Î¼m2. These show the quantization of the transistor size quite nicely — if you look closely at Fig. 3, you can see that the number of fins used for each transistor increases with the size of cell, with the exception of the T3 and T4 PMOS pull-up devices, which only have one fin. 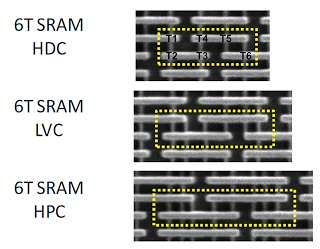 Overall Intel claims a 100-200 mV reduction in Vt for all transistor types, leading to a ~40% reduction in dynamic power.

Intel is trying to catch their SoC schedule up with the CPU launches, so we will likely see 22nm SoC chips next year, and the 14nm CPU and SOC processes should be launched in parallel, theoretically by the end of 2013.