In February of 1964, The Beatles landed for the first time at JFK in New Work and appeared on the Ed Sullivan show on February 9th. Their song â€śI want to hold your handâ€ť â€“ their 1st #1 hit â€“ was still #1 after 7 weeks. Â France & Great-Britain signed an accord over building the channel tunnel (construction for the â€śchunnelâ€ť began in 1988; it opened in 1992). The GI Joe toy (it is not a doll!) was introduced to the U.S. market.

In the electronics arena, it was a time when undersea telephone cables were being installed. In the February 1964 issue of Solid State Technology, Bell Laboratories described scientific advances that made possible a telephone cable system across the Atlantic Ocean. â€śIn service beginning October 14, 1963, it transmits 128 simultaneous two-way telephone conversations,â€ť an ad boasts. â€śIn 1964, a cable of this kind will be laid between Hawaii and Japan, providing an extension across the Pacific Ocean of the telephone cable system now in service to Hawaii.â€ť 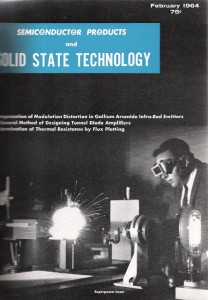 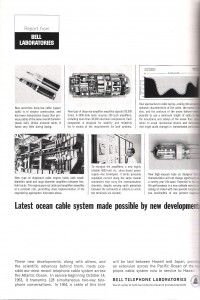 In the area of R&D, the development of two experimental NPN transistors for solid-state memory applications was reported by scientists of IBM. From the 1964 issue: â€śOne of the transistors is a high voltage, high speed, medium power device; and the other is an ultra-fast, medium power, low voltage device. Both are silicon, epitaxial, planar, double-diffused types. The high voltage transistor is capable of switching 600 mA of current through a 90V swing in less than 25 ns.The low-voltage device can switch one ampere of current through a 25V swing in less than 8 ns.â€ť The developments were described at the 1963 meeting of the IEEE Profession Group on Electron Devices in two papers, presented by P. P. Castrucci.Â  I believe that has to be the same Paul P. Castrucci who went on to start IBMâ€™s 200mm line. I knew him personally and enjoyed his many stories, many of which are recounted in a discussion for the Computer History Museum.

Sadly, Paul passed away in June of last year.

Another interesting story in February 1964: How solid state electronics helped save space at the Voice of America (the official external broadcast institution of the U.S. federal government) installation in Bethany, Ohio. The Bethany Relay Station operated from 1944 to 1994. In 1962, high voltage stacks replaced the expensive 870A and 872A tubes.

The Editorial examined the potential of thermionic energy converters. â€śThe observation of the Edison effect, a phenomenon describing the collection of electrons emitted from a thermionic cathode, may be considered the starting conception of a family of energy converters which have no moving parts and which are being developed rapidly to achieve efficiency better than 10 percent and power outputs in the order of hundreds of watts.â€ť Sam Marshall wrote that in 1964. 50 years later, the potential is still being explored,â€ť wrote Sam Marshall.

Today, 50 years later, the potential of these devices is still being explored today. Stanford University and the SLAC National Accelerator Laboratory, are working on applying thermionic energy convertors to applications in the field of Concentrating Solar Power (CSP). Â The research team is creating a â€śnew solid-state energy conversion technology based on microfabricated and photon-enhanced thermionic energy converters (PTECs). When used as a topping cycle in concentrated solar thermal electricity generation, PTECs will enable system efficiencies in excess of 50%.â€ť

Microscale-enhanced thermionic emitters will enable high efficiency solar to electrical conversion by taking advantage of both heat and light.

The goals of this project are to:

Â Â Â  Demonstrate a next-generation thermionic energy converter device with a stand-alone laboratory efficiency >15% as a significant intermediate step toward a stand-alone unit of >30%.

â€śThrough the use of modern design tools and wafer-scale microfabrication methods, this project is demonstrating for the first time a manufacturable approach to thermionic energy converter production that overcomes the space-charge-induced efficiency limitations of traditional thermionic devices. Also, through the novel application of appropriately designed and fabricated semiconductor heterostructure cathodes, the efficiency is being further improved by the photon-enhanced thermionic emission process,â€ť a press release notes. Interesting, but Iâ€™d like to know why itâ€™s taken 50 years to get there.

Check out a few of the ads from the issue: 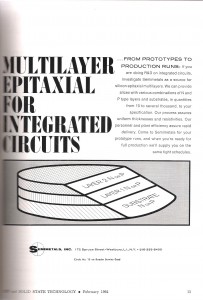 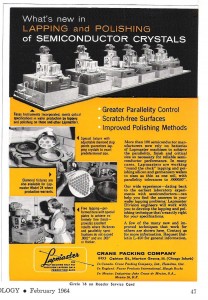 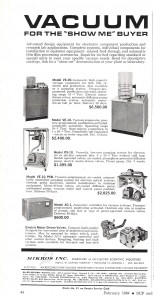