The average revenue generated from processed wafers among the four biggest pure-play foundries (TSMC, GlobalFoundries, UMC, and SMIC) is expected to be $1,138 in 2018, when expressed in 200mm-equivalent wafers, which is essentially flat from $1,136 in 2017, according to a new analysis by IC Insights (Figure 1). Â The average revenue per wafer among the Big 4 foundries peaked in 2014 at $1,149 and then slowly declined through last year, based on IC Insightsâ€™ extensive part-two analysis of the integrated circuit foundry business in the September Update to The 2018 McClean Report. 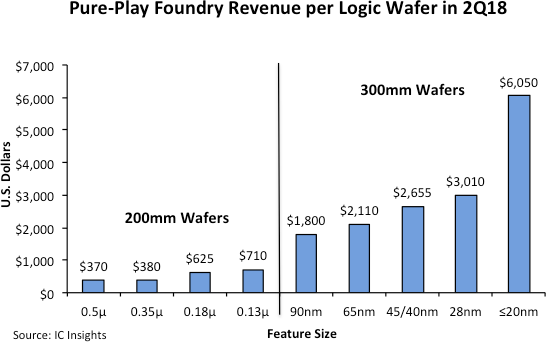 There will probably be only three foundries able to offer high-volume leading-edge production over the next five years (i.e., TSMC, Samsung, and Intel). Â IC Insights believes these companies are likely to be fierce competitors among themselvesâ€”especially TSMC and Samsungâ€”and as a result, pricing will likely be under pressure through 2022.