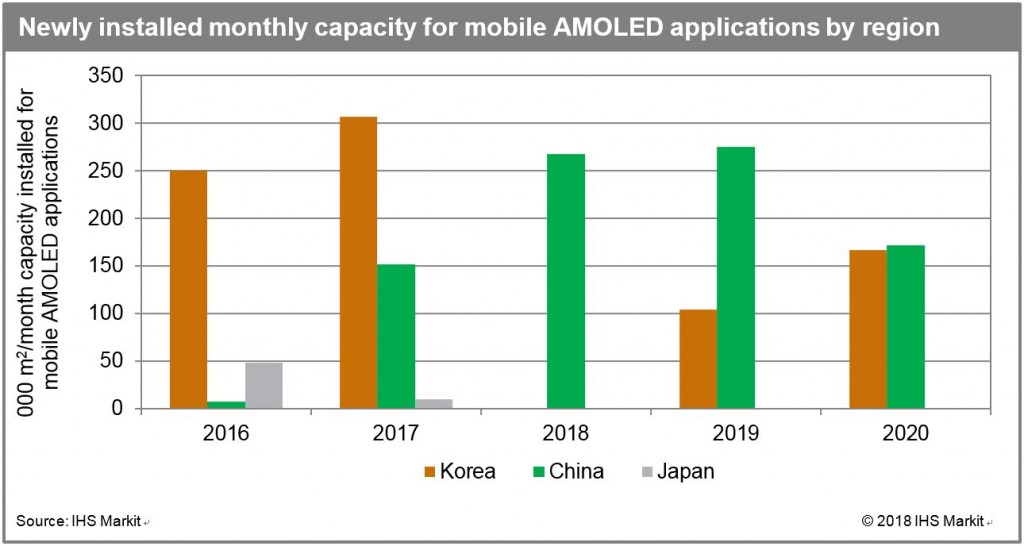 Since the third quarter of 2017, South Korean FPD makers have been reevaluating the pace of their AMOLED expansion strategies. By the end of January 2018, with demand falling short of expectations and suffering from low factory utilization rates, they delayed all major capacity expansion plans, including several cases of deferring the ramp of equipment already installed.

As the market matures, concern is cumulating that smartphone sales may not continue to increase at rates as high as previously hoped for. With display and smartphone performance specifications already excellent, the replacement cycle is lengthening. Furthermore, adoption of high-end flexible AMOLED panels in a wider range of models is being restricted by high prices that are still about two times those of equivalently specified liquid crystal displays (LCDs).

â€śAfter doubling AMOLED capacity for mobile applications in the past two years, a slowdown in facility investment in South Korea is not surprising,â€ť said Charles Annis, senior director at IHS Markit. â€śEven so, the freezing of all new investments and multiple mass production schedules suggests recognition that continued capacity additions will outpace the marketâ€™s ability to absorb them.â€ť

Despite market concerns and changing investment plans in South Korea, Chinese FPD makers are still pushing ahead with their own aggressive new AMOLED factory plans, at least for now. According to the AMOLED and LCD Supply Demand & Equipment Tracker by IHS Markit, ramped Chinese AMOLED capacity will rise from just 228,000 square meters per year in 2016 to 8.3 million square meters in 2020, at a compound annual growth rate of 145 percent.

Chinese makers are not immune to challenges in the smartphone and flexible AMOLED market, and in most cases, they have not yet proven their ability to manufacture premium flexible AMOLED panels at high volume. Regardless, with strong financial backing from local governments, most projects are still moving forward as planned, and will likely continue until credit begins to tighten.

South Korean panel makers are carefully watching how fast the market for AMOLED displays is increasing and are prudently adjusting capacity plans. Chinese makers have less flexibility and less motivation to change strategies due to contracts with local governments in multiple locations across the country.

â€śThe rationalization of how fast the mobile AMOLED display market can grow does raise questions,â€ť Annis said. â€śWhat will drive a renewal of investment in South Korea and how will Chinese FPD makers fill their new fabs?â€ť

â€śReduced panel prices will enable AMOLEDs to compete more on performance and form factor advantages over LCDs, while new applications, particularly foldable displays, will increase average panel size. Both of these trends have the potential to significantly drive future demand; however, in the shorter term, they remain elusive targets due to high costs and remaining technical barriers,â€ť Annis said.