As new methods have become available for understanding and manipulating matter at its most fundamental levels, researchers working in the interdisciplinary field of materials science have been increasingly successful in synthesizing new kinds of materials. Often the goal of researchers in the field is to design materials that incorporate properties that can be useful for performing specific functions. Such materials can, for example, be more chemically stable or resistant to physical breakage, have advantageous electromagnetic characteristics, or react in predictable ways to specific environmental conditions. 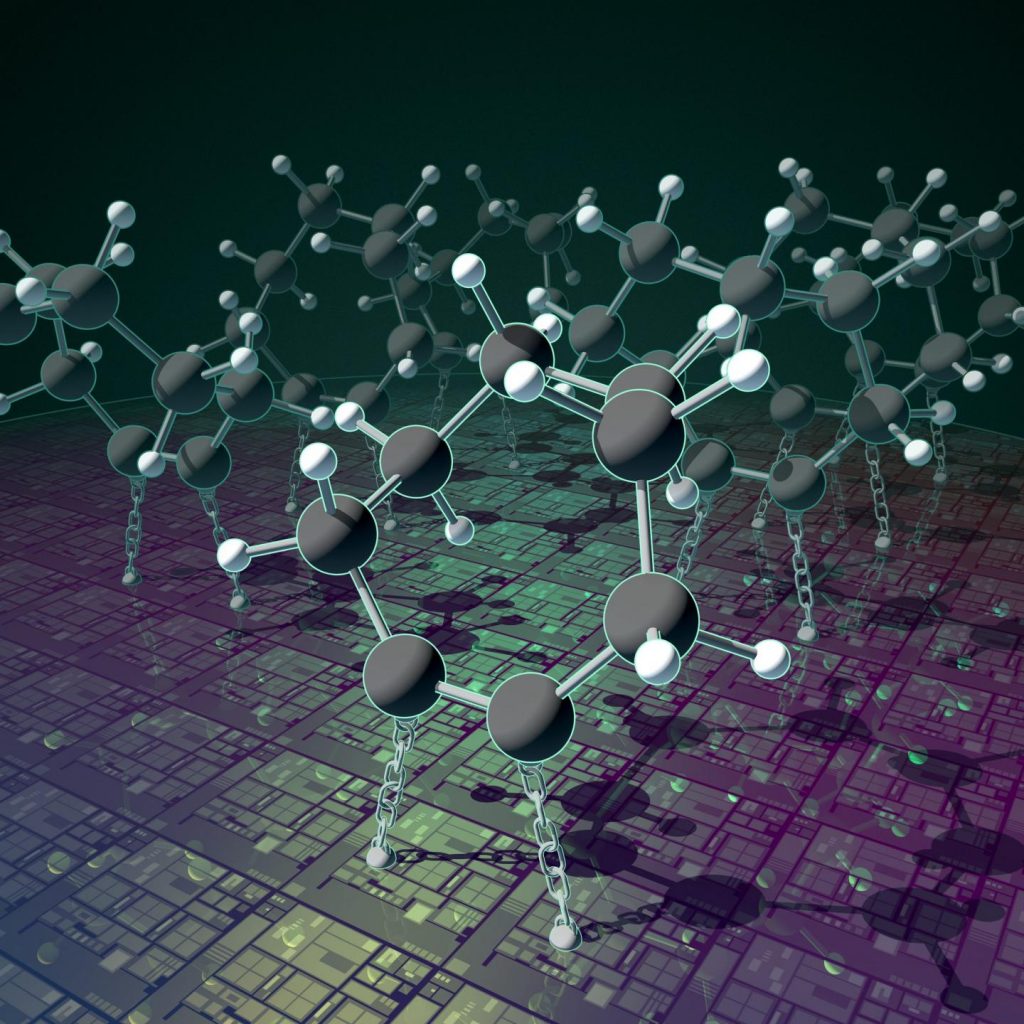 Dr. Ralf Tonner and his research group at the University of Marburg are addressing the challenge of designing functional materials in an unusual way — by applying approaches based on computational chemistry. Using computing resources at the High-Performance Computing Center Stuttgart (HLRS), one of three German national supercomputing centers that make up the Gauss Centre for Supercomputing, Tonner models phenomena that happen at the atomic and subatomic scale to understand how factors such as molecular structure, electronic properties, chemical bonding, and interactions among atoms affect a materialâ€™s behavior.

“When you study how, for example, a molecule adsorbs on a surface,” Tonner explains, “other scientists will often describe that phenomenon with methods from physics, solid state theory, or band structures. We think it can also be very helpful to ask, how would a chemist look at whatâ€™s happening here?” From this perspective, Tonner is interested in exploring whether understanding chemical reactions — how atoms bond together into molecules and react when brought into contact with one another — can offer new and useful insights.

In a new publication in WIREs Computational Molecular Science, Tonner and his collaborator Lisa Pecher highlight the ability of computational chemistry approaches using high-performance computing to reveal interesting phenomena that occur between organic molecules and surfaces. They also demonstrate more generally how these interactions can be understood with respect to the molecular and solid state world. The knowledge they gained could be useful in designing patterned surfaces, a goal of scientists working on the next generation of more powerful, more efficient semiconductors.

Atoms bond together to form molecules and compounds when they approach one another and then trade or share electrons orbiting around their nuclei. The specific atoms involved, the physical shapes that the molecules take, their energetic properties, and how they interact with other nearby molecules are all properties that give a compound its unique properties. Such characteristics can determine whether compounds are likely to remain stable, or whether stresses such as changes in temperature or pressure could affect their reactivity.

Tonner uses a computational approach called density functional theory (DFT) to explore such characteristics at the quantum scale; that is, at the scale where Newtonian mechanics becomes replaced by the much stranger world of quantum mechanics (at distances of less than 100 nanometers). DFT uses information about variations in the density of electrons within a molecule — a quantity that can also be experimentally measured using a widely used technology called x-ray diffraction — to derive the energy of the system. This, in turn, enables the researchers to infer interactions among nuclei as well as interactions between electrons and nuclei, factors that are critical to understanding chemical bonds and reactions.

DFT can provide useful, though static, information about the energy profiles of the compounds they study. To gain a better understanding of how systems of molecules actually behave when interacting with a surface, Tonnerâ€™s group also uses high-performance computing at HLRS to perform molecular dynamics simulations. Here, the scientists look at how the system of molecules develops over time, at the level of atoms and electrons and at time scales of picoseconds (one picosecond is one trillionth of a second).

Such calculations typically use 2,000-3,000 computing cores, running on a problem for a week, and Tonner has been budgeted approximately 30 million CPU hours at HLRS for the current two-year funding cycle.

“Increasing computing power has made it possible for computational chemistry and quantum chemistry to describe real molecular systems. Just 15-20 years ago, people could only look at small molecules and had to make rather strong approximations,” Tonner explains. “In the last few years, the computational chemistry and solid state theory communities have solved the problem of parallelizing their codes to operate efficiently on high-performance computing systems. As supercomputers get bigger, we anticipate being able to develop increasingly realistic models for experimental systems in materials science.”

One area in which Tonner is currently using computational chemistry is to study ways to improve silicon for use in new kinds of semiconductors. This problem has gained urgency in recent years, as it has become clear that the microelectronics industry is reaching the limits of its ability to improve semiconductors using silicon alone.

As Tonner and experimental colleagues report in a recent paper in the Beilstein Journal of Organic Chemisty, functionalizing silicon with compounds such as gallium phosphide (GaP) or gallium arsenide (GaAs) could enable the design of new kinds of semiconductors. This research, based in a field called silicon photonics, posits that such new materials would make it possible to use light instead of electrons for signal transport, supporting the development of improved electronic devices.

“To do this,” Tonner explains, “we really need to understand how the interfaces between silicon and these organic compounds look and behave. The reaction between these two material classes needs to proceed in a very controlled manner so that the interface is as perfect as possible. With computational chemistry we can look at the elemental details of these interactions and processes.”

For example, to cover a slab of silicon, liquid precursor molecules for the constituent atoms of gallium arsenide are placed in a bubbler, where they are then brought into the gas phase. These precursor molecules are composed of the atoms required for the new material (gallium, arsenic) and ions or molecules called ligands to stabilize them in the liquid and gas phase. These ligands are subsequently lost in the deposition process and when silicon is placed in the system, the precursor molecules are adsorbed onto the solid silicon surface. After adsorption and loss of the ligands, gallium and arsenide atoms attach to the silicon, forming a GaAs film.

How atoms are arranged when they adsorb to a surface is determined by chemical bonding. The strength of these bonds and the density with which the GaAs precursor molecules are adsorbed is affected not only by the distance between them and the silicon surface but also by interactions among the precursor molecules themselves. In one type of interaction, called Pauli repulsion, clouds of electrons overlap and repel each other, causing the available energy for bonding to decline. In another, called attractive dispersion interaction, changes in the electronic positions in one atom cause electrons to be redistributed in other atoms, bringing the electron movements into harmony and lowering the energy of the total system.

Previously, it had been suggested that repulsive relationships among atoms is the most important factor in “steering” atoms into place when they adsorb on a surface. By using density functional theory and looking at intriguing features of how electrons are distributed, the researchers determined that the ability of atoms to steer other atoms into place on the surface can also result from attractive dispersive interactions.

Gaining a better understanding of these fundamental interactions should help designers of optically active semiconductors to improve adsorption of the precursor molecules onto silicon. This, in turn, would make it possible to combine light signal conduction with silicon based microelectonics, bringing together the best of both worlds in optical and electronic conduction.

For Tonner, using first principles methods in chemistry for materials science applications holds great promise. “Theory today is very often taken as a complement to experimental investigation,” he says. “Although experimentation is extremely important, our ultimate goal is for theory to be predictive in ways that enable us to make the first steps in first principles-inspired materials design. I see this as a long term goal.”