The next major roadblock to progress in the ongoing push to develop EUV lithography for volume production is the availability of defect-free mask blanks. According to Veeco‚Äôs Tim Pratt, Senior Director, Marketing, the tools in place today are not capable of producing mask blanks with the kind of yield necessary to support a ramp in EUV. ‚ÄúBased on the yield today, the mask blank manufacturing capacity can‚Äôt produce enough mask blanks to support the ASML scanners that they‚Äôre planning to ship,‚Äù Pratt said. ‚ÄúASML is going to be delivering some light source upgrades in the field and when those start happening, the effective total wafer throughput of EUV scanners in the field is going to multiply and there‚Äôs just not the supply of usable mask blanks to be able to support those.‚Äù

The requirement for 2015 is to have zero blank defects larger than 62nm. SEMATECH in 2012 reported work showing eight defects larger than 50nm. ‚ÄúA lot of progress being made but the elusive zero defects has not yet been hit,‚Äù Pratt said. Veeco, which is the sole supplier of EUV multilayer deposition tools, has plans to upgrade the existing Odyssey tool and launch a new platform in the 2017/2018 timeframe.

Figure 1 shows an EUV mask, which is considerably more complicated than conventional photomasks. The EUV mask begins with a substrate. On the back of the substrate you have some material that‚Äôs used for chucking (an electrostatic chuck is used to hold the mask to a stage in the ASML tool and in the Veeco ion beam deposition tool). On top of the substrate is a multilayer sandwich made up of 40-50 moly silicon pairs that creates a mirror. A ruthenium capping layer helps protect the mask. The top layer is an absorber, and that‚Äôs what gets patterned.

The left photo is a larger particle that fell on the blank during deposition. Pratt said that even if you could mill that down and make it level, you would just never get the reflectivity out of the section that you need.

Where is EUV today? Billions have already been invested to build the EUV infrastructure with particular emphasis on the light source. Chipmakers have invested in ASML, and ASML acquired light-source provider Cymer. There has also been a very large Industry investment in Zeiss to build the AIMS tool, which is a defect detection and repair system at EUV wavelengths.

In July, ASML said NXE:3300 scanner imaging and overlay performance reached levels where they are engaging with customers on a strategy for the 10nm logic node insertion (23nm half pitch). Good imaging performance was shown down to 13nm half pitch, and overlay between the NXE:3300 and NXT systems, had been demonstrated at less than 3.5nm. Good performance, stability and reliability of the pre-pulse source concept was demonstrated with a rate of around 40 wafers per hour, and ASML expressed confidence in reaching the goal of 70 wafers per hour productivity in 2014.

What could derail the EUV ramp, according to Pratt, is a supply of defect-free mask blanks. ‚ÄúEUV is, despite many years and many dollars of investment, not yet in production. The two main gaps are the EUV light sources and the defects on the mask. As they start to make progress, people start to look more seriously at the list of things to worry about for EUV going to production. Number one on that list is the mask defects. Mask defects can come from all different sources during the entire process, from the substrate all the way through to usage in the fab,‚Äù Pratt said. ‚ÄúThe most dangerous (un-repairable) defects come from the ML (multilayer) coating process during mask blank manufacturing. You can‚Äôt clean them and you can‚Äôt repair them and if you have more than some very small amount, there‚Äôs really nothing you can do about it. You just have to throw that mask blank away and try again, which creates a very large selling price for the mask blanks. Not just because they are difficult to make but you‚Äôre throwing away a substantial amount of what you‚Äôre trying to sell,‚Äù Pratt said.

Figure 2 illustrates the process flow for a EUV mask blank. After a substrate polishing process, the substrates goes from the substrate supplier to the mask blank supplier. At the mask blank supplier, they will deposit the multilayer, the fiducial mark and the deposition. The blank gets sold to the mask shop, which could be either captive or a merchant. That blank, which is basically a mirror at the point, gets patterned and inspected and sent off to the fab. Pratt said that once the mask hits the mask shop, there is a little more leeway in terms of the defects because the defects that occur in the mask show are usually on top. ‚ÄúIt‚Äôs usually absorber type defects or patterning type defects and those are a lot more easily repairable,‚Äù he said. 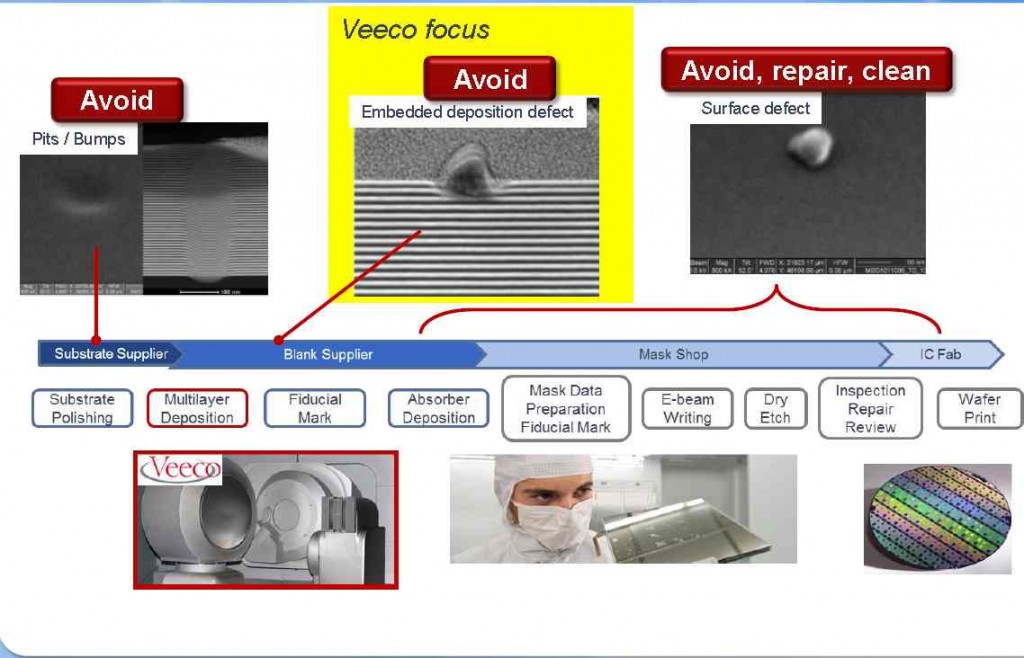 Figure 3 shows the timeline of Veeco‚Äôs system developed, starting with a research system developed in 1996 that went to Lawrence Berkeley. The was optimized in the 2003-2010 timeframe, which included work with SEMATECH in a joint development program. That basically turned it into what Pratt describes as an R&D system. ‚ÄúWe have a system that is being used for all the mask blanks in the world. But those mask blanks are really R&D blanks that people use for print checks and reflectivity checking, but certainly nothing they would use in a fab yet, or expect to get yield off of,‚Äù he said. ‚ÄúA lot of the time, you don‚Äôt know if it‚Äôs yielding or not until the very end of the process.‚Äù 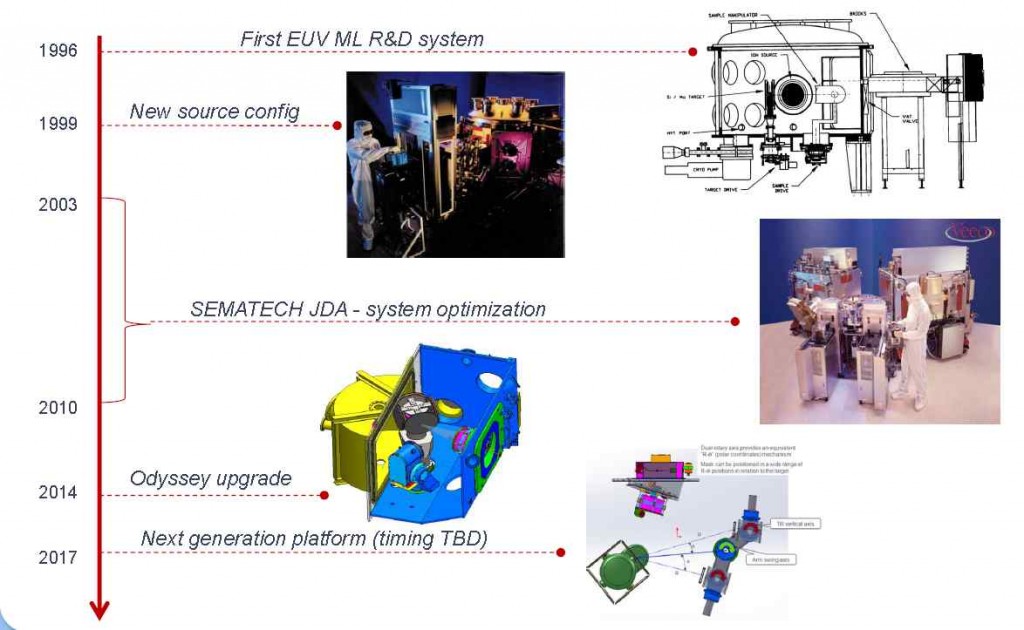 Pratt said they have seen some improvements when it comes to defects. ‚ÄúWe‚Äôre not yet where we need to be for logic high volume manufacturing, but we‚Äôre getting close to where we need to be for memory.‚Äù The real issue is the low yield. ‚ÄúAt the current yields, that mask blank makers would need to spend a whole lot of money, probably on the order of $3 billion or so, on capital to meet what the mask blank demand would be over the next five years. That‚Äôs just not feasible. EUV clearly can‚Äôt ramp in that scenario,‚Äù Pratt said.

Veeco is addressing the defect challenge in two ways. The short-term solution is an Odyssey upgrade. The longterm solution is a new platform. ‚ÄúThe Odyssey upgrade improves the yield of the tool. But then longer term we think the next gen is needed, especially as you get out to years 4 and 5 where high volume manufacturing starts to occur,‚Äù Pratt said.

The ion beam deposition system in shown in Figure 4. The target assembly rotates, so the process might start off with silicon, the assembly is then rotated to deposit molybdenum and rotated again to deposit ruthenium. The problem is that the ion beam doesn‚Äôt always direct hit the target. ‚ÄúYou might have some of these high energy ion missing the target and hitting the chamber. The chamber has shields on it, but that ion can bounce around and when it hits the shields, there‚Äôs a chance that it can knock off particles,‚Äù Pratt said.

Longer term, the next generation EUV ML system will focus on particles and CWL (center wavelength) process repeatability (CWL is a measure of how reflective the mask is). The new platform will minimize particle proximity, and accommodate new source technology. A larger chamber, out-of-plane deposition geometry, low-defect clamping and integrated endpoint control are also planned. Figure 5 shows progress in defect reduction from 2004 to 2012.

If you have some news to share, send me an e-mail at [email protected],