The latest update to the SEMIÂ World Fab ForecastÂ report, published on February 28, 2018, reveals fab equipment spending will increase at 5 percent in 2019 for a remarkable fourth consecutive year of growth as shown in figure 1. China is expected to be the main driver of fab equipment spending growth in 2018 and 2019 absent a major change in its plans. The industry had not seen three consecutive years of growth since the mid-1990s. 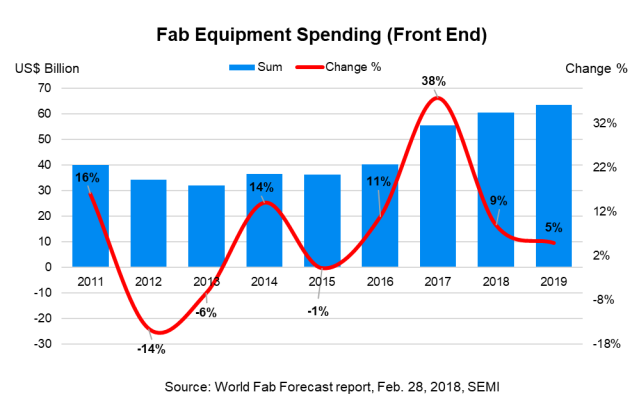 SEMI predicts Samsung will lead in fab equipment spending both in 2018 and 2019, with Samsung investing less each year than in 2017.Â  By contrast, China will dramatically increase year-over-year fab equipment spending by 57 percent in 2018 and 60 percent in 2019 to support fab projects from both multinationals and domestic companies. The China spending surge is forecast to accelerate it past Korea as the top spending region in 2019.

After record investments in 2017, Korea fab equipment spending will decline 9 percent, to US$18 billion, in 2018 and an additional 14 percent, to US$16 billion, in 2019. However both years will outpace pre-2017 spending levels for the region. Fab equipment spending in Taiwan, the third-largest region for fab investments, will fall 10 percent to about US$10 billion in 2018, but is forecast to rebound 15 percent to over US$11 billion in 2019. (Details about other regionsâ€™ spending trends are available in SEMIâ€™s latest World Fab Forecast.)

As expected, Chinaâ€™s fab equipment spending is increasing as projects shift to equipment fabs constructed earlier in this cycle.Â  The record 26 volume fabs that started construction in China in 2017 will begin equipping this year and next.Â  See figure 2. 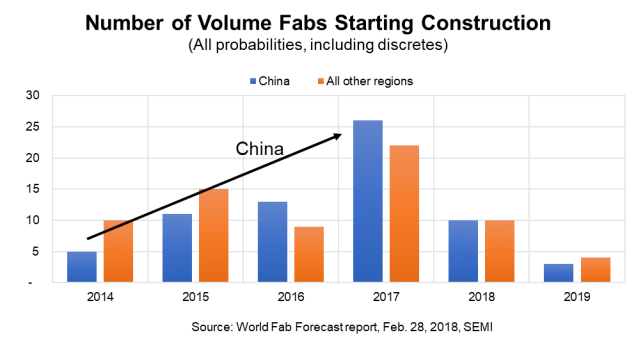 Non-Chinese companies account for the largest share of fab equipment investment in China. However, Chinese-owned companies are expected to ramp up fabs in 2019, increasing their share of spending in China from 33 percent in 2017 to 45 percent in 2019.