In IFTLE 392, we discussed DARPA‚Äôs Electronics Resurgence Initiative (ERI), a $1.5B 5 year effort to remake the U.S. electronics industry. [link]

Among the 42 projects listed in the ERI, the ‚ÄúRevolutionizing Computing Systems through Dense and Fine-Grained Monolithic 3D Integration‚Äù project¬Ýat $61MM is the largest on the list. Its goal is to use monolithic 3D integration to make chips made using decades-old fabrication processes competitive with chips made using today‚Äôs bleeding-edge technologies. The project is based on technology that allows carbon nanotube transistors and resistive RAM memory to be built on top of ordinary CMOS logic chips. It was developed by Max Shulaker, of MIT, and his colleagues at Stanford University. The program is being scaled up at SkyWater Technology Foundry in MN.

Over the next three years, Shulaker‚Äôs group at MIT will focus on developing a manufacturable process, and the Stanford group will create design tools that will help engineers take advantage of the increased performance that the stacking of CMOS, nanotube transistors, and RRAM offers. Skywater will develop and test a high-yield ‚Äúprocess flow‚Äù that works in its foundry. So exactly who is SkyWater technologies ?

In March of 2017, Cypress Semiconductor sold its 200mm Fab 4 in Bloomington, Minnesota, to SkyWater Technology Foundry for $30 million [link].

Skywater announced that their intent was to operate the fab as a stand-alone USA specialized foundry. Skywater agreed to manufacture wafers for Cypress under a multi-year supply agreement while it tries to attract other foundry customers (similar to the IBM Global Foundry agreement of a few years ago). Cypress had operated the automotive-qualified fab since it acquired it from Control Data VTC in 1990. The fab reportedly has a clean room floor space of 80,000 square feet and was capable of 16,700 wafer starts per month. Cypress had about 450 employees at the Bloomington wafer fab in December 2015. ” SkyWater reports that it supports both low volume, fast turnaround processing and high volume production. It runs manufacturing processes from 0.35-micron down to 90nm.

The SkyWater facility maintained its ‚Äútrusted site‚Äù accreditation allowing it to provide wafer fabrication, design, wafer test, and broker services to the US government as a trusted supplier. SkyWater announced its plans to expand engagements with the DoD [link]

According to Sky Water, they are now the only American-owned pure-play silicon foundry in the country as shown in the fig below.

The Sky Water technology roadmap is shown below. 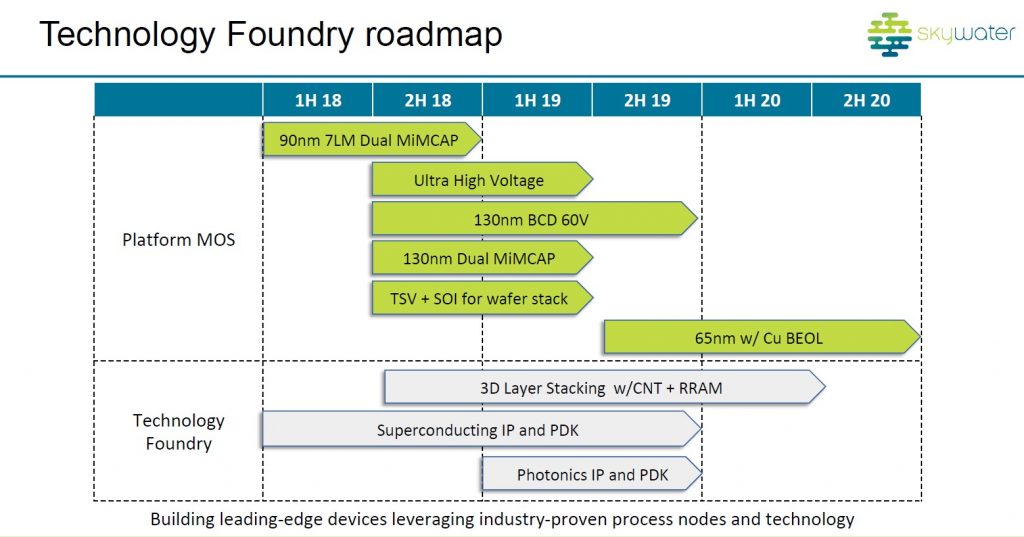 Could Apple could find itself at the center of the US vs China trade war?

This from China‚Äôs Global Times [GT]¬Ý [link] ‚Äú‚Ä¶. Why has the California-based company (Apple) enjoyed remarkable success in China, while some Chinese companies have experienced big losses amid a growing trade conflict with Washington ‚Ä¶‚Äù

Apple recently reported financial results for its fiscal third quarter and sales to the greater China region gained 19 percent to $9.6 billion. GT contends the company‚Äôs better-than-expected quarterly result in China was a major reason for the surge in its shares. China serves as a key production and processing base for Apple. Many Chinese companies have been included in Apple‚Äôs production chain to provide parts and components or assembly work.

China is reportedly the most important overseas market for the Apple, leaving it exposed if Chinese people make it a target of anger and nationalist sentiment. China reportedly doesn‚Äôt want to close its doors to Apple despite the trade conflict, but GT warns ‚Äú.. if the US company wants to earn good money in China, its needs to share its development dividends with the Chinese people..‚Äù and¬Ý ‚ÄúIt is impractical and unreasonable to kick the company out of China, but if Apple wants to continue raking in enormous profits from the Chinese markets amid trade tensions, the company needs to do more to share the economic cake with local Chinese people‚Äù.

GT notes that ‚ÄúApple‚Äôs contribution to job creation in China is notable, but the company enjoys most of the profits created from its Chinese business‚Äù. In the case of the iPhone, their statistics show Chinese processors only get 1.8 percent of the total profits created by the device.