Handel Jones, founder and CEO of International Business Strategies (IBS), spoke at SEMIās Industry Strategy Symposium last week, focusing on key trends, factors impacting the growth of the industry and the migration to smaller feature dimensions. He is bullish about 2014 and industry innovation, but cautious about how quickly the industry will move to new technology nodes due to higher costs, and long design cycles. Overall, he said he believed semiconductor market growth this year will be slightly better than 2013, due in part to the strength of the global GDP.

Perhaps most surprisingly, he had a fair amount of uncertainly about 20nm. Ā āWill 20nm be a high tech technology node and when will that occur?ā he said. āWeāre tracking design starts and design completions and we see a few 20nm designs but not a lot. Frankly, whether 20nm will be big or not will really depend on two customers: one is Qualcomm and the other is Apple.ā Handel said āthere is a significant challenge in getting lower cost at 20nmā compared to 28nm due to a lack of increase in the gate density and the potential yield impact. āWe think 20nm, if it does go into volume production, it will not be in 2014. Potentially 2015 and maybe 2016,ā he said.

Similarly, Handel believes there will be a postponement of 16/14nm. āWe expect initial production in late 2016, beginning of 2017. Thatās for the SoC business. The FPGA markets will be different,ā he said. āThere will also be delays in 10nm. Delays mean you canāt really go on the 2 year cycle or even the 3 year. I know people will vehemently disagree with that, but if you look at whatās really happening from a design start point of view and also the end customers, I think youāll agree with our conclusion,ā he said.

āIf you look at the reality of the industry, 28nm high-k metal gate went into high volume production toward the end of 2013,ā said, adding that they define high volume as 10% of the output. āIt took almost 4 years for 28nm high-k metal gate to go into high volume production. Now weāre basically starting 20nm. Even if the fabs are ready what you have is the design cycle time. Preparing libraries and IP can take six months at least. Doing a complex design in 20nm can take you at least a year. Validating the design can take you another half a year. If itās a modem, and you need approval from the carriers, thatās another half a year. Even if the fab is ready, you start these things and itās two years,ā he said. āWe have an industry that is trying to adopt three technologies in three years. Itās impossible,ā he said. āItās not realistic from an infrastructure point of view, even if it the fabs are there, for three technology nodes to ramp in three years.ā 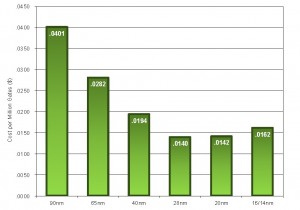 Handel said that application processor (AP)/modem design can cost about $450-500 million in 16/14nm, with a timeframe of around 18 months. āYou need 10X revenue so for that design, so if youāre spending $450 million, you need $4.5 billion in revenue. A few companies can get that, but not many,ā he added.

āThe economics of the industry are forcing changes. Youāve seen them already. The long ramp up time for 28nm HKMG, and 20nm with double patterning is clearly a major challenge from a technology point of view, and a bigger challenge from a cost point of view. FinFETs will be an even bigger challenge. Intel is having delays in their 14nm FinFETs, whether in high volume at 22nm, how will companies that have never done FinFETS before, how will design companies that have never designed in FinFETs before, how will they ramp faster?ā he asked.

Just looking at the location of the headquarters of semiconductor companies, he said the U.S. was still strong, but there was also strong growth from Korea ā mostly in the form of Samsung ā but also China and Taiwan. āWe see a relatively flat Europe and then a continuing decline in Japan. In fact, we donāt see Japan strengthening unless we see some major changes,ā he said. 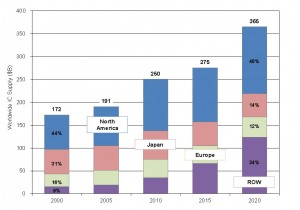 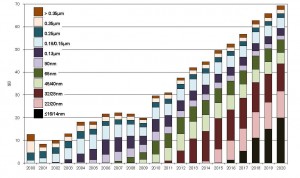 Handel said the gate utilization is an issue because of limitations of the design tools and parasitic effects. āThe other factor is parametric yields, which are strictly tied into leakage control for the 20nm and of course for the 16nm FinFETs,ā he said. āYou can break this. Intel has shown that it can be broken and of course thatās an excellent achievement. But, itās based on very high design costs, potentially $1 billion per design, so you need $10 billion in revenue. It also takes a number of years,ā he said. He noted that, in the smartphone market, designs move very fast. āYou canāt make that kind of investments in designs.ā

7 thoughts on “High cost per wafer, long design cycles may delay 20nm and beyond”