IC Insightsâ€™ latest market, unit, and average selling price forecasts for 33 major IC product segments for 2018 through 2022 is included in the March Update to the 2018 McClean Report (MR18). Â The Update also includes an analysis of the major semiconductor suppliersâ€™ capital spending plans for this year.

The big increase in the DRAM market forecast for 2018 is primarily due to a much stronger ASP expected for this year than was originally forecast. Â IC Insights now forecasts that the DRAM ASP will register a 36% jump in 2018 as compared to 2017, when the DRAM ASP surged by an amazing 81%. Â Moreover, the NAND flash ASP is forecast to increase 10% this year, after jumping by 45% in 2017. Â In contrast to strong DRAM and NAND flash ASP increases, 2018 unit volume growth for these product segments is expected to be up only 1% and 6%, respectively.

At $99.6 billion, the DRAM market is forecast to be by far the largest single product category in the IC industry in 2018, exceeding the expected NAND flash market ($62.1 billion) by $37.5 billion. Â Figure 1 shows that the DRAM market has provided a significant tailwind or headwind for total worldwide IC market growth in four out of the last five years. 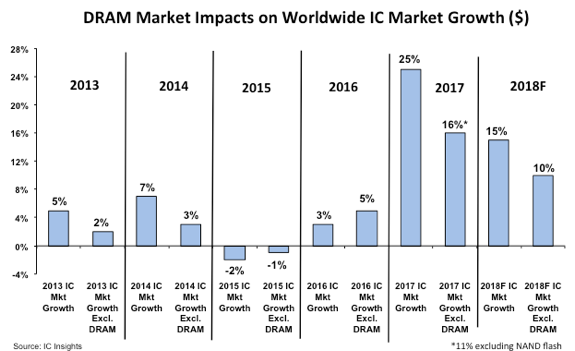