An event that many of us have been waiting for, for a long time finally happened a few weeks ago. At the recent TSMC Open Innovation Platform Ecosystem Forum on October 16th, TSMC announced the foundry reference flow supporting CoWoS (Chip-on-Wafer-on-Substrate) within their open innovation platform (OIP) [link]. 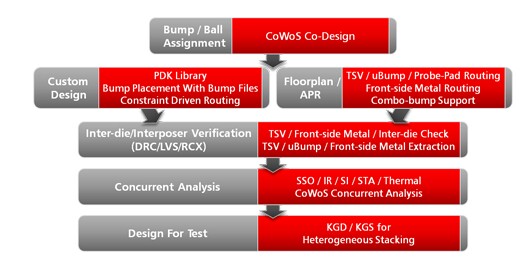 It seems like only yesterday there were no EDA tools for 2.5/3DIC [ see PFTLE 23, IMEC arrives in Hsinchu and other 3D IC News]. IFTLE is happy to announce that that is no longer the case with several EDA companies including Cadence, Mentor, Synopsys and Ansys were announced by TSMC as partners for their CoWoS reference flow.

Cadence announced that TSMC has validated Cadence 3D-IC technology for its CoWoS reference flow with the development of a CoWoS test vehicle that includes an SoC with Cadence Wide I/O memory controller and PHY IP [link]. This is the foundry segmentâ€™s first silicon-validated reference flow enabling multiple die integration. 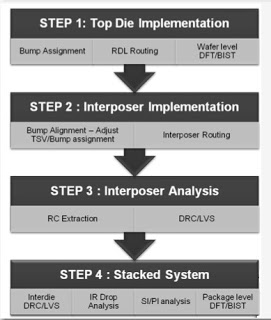 The Pyxis IC Station custom layout product "provides redistribution layer (RDL) routing and ground plane generation with the ability to do 45 degree angle routes to vias, and specific enhancements for the TSMC flow include improvements to the bump file import process". 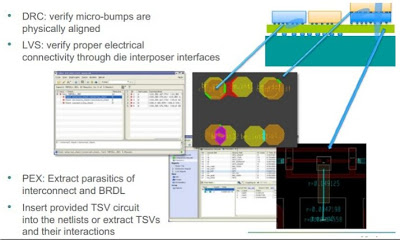 Key features for 3D IC include:

TSMC has validated Synopsysâ€™ implementation, analysis and signoff tools, including:

TSMC will take over Apple orders from Samsung by 2014

During SEMICON Taiwan last month Gartner predicts TSMC is likely take over all of Appleâ€™s processor contracts (from Samsung) by 2014. Gartner predicted Samsungâ€™s LSI unit will manufacture 700,000 wafers for Apple processors in 2012 with a value of ~ $2.1 B.

Gartner predicts that if Samsung loses all its contracts to TSMC, TSMC would see revenue increases >10% (Gartner estimates TSMCâ€™s 2012 revenues at $16 B).