In the 1990s, photo materials won out over dry etch materials because of lower COO. The processes are compared below. 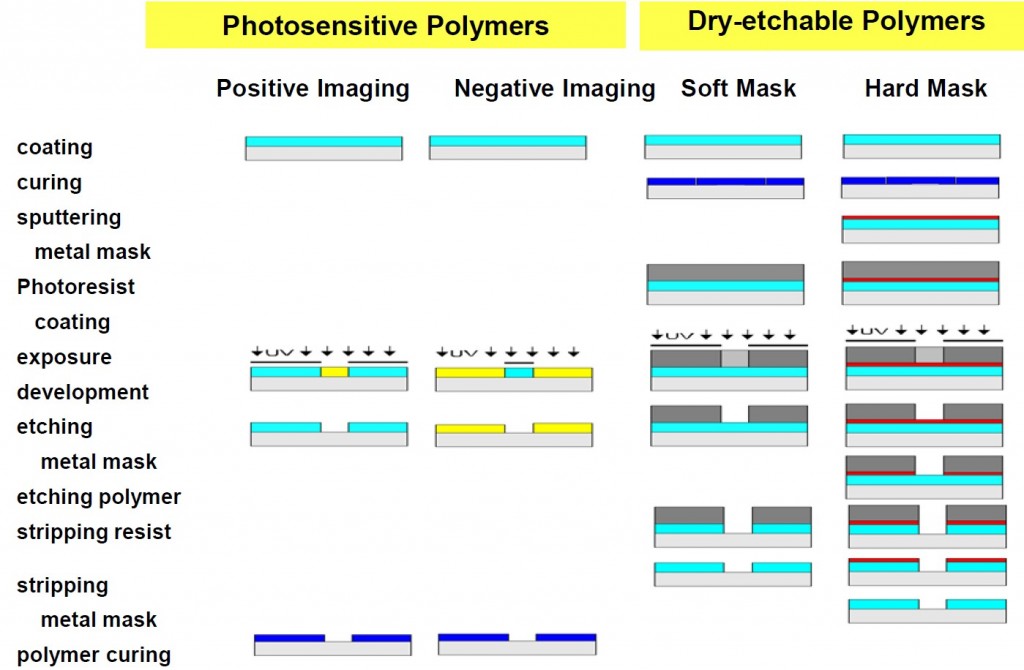 The question now isÂ  – Can we do even better with laser processing ? Laser is compared to photo processing below: 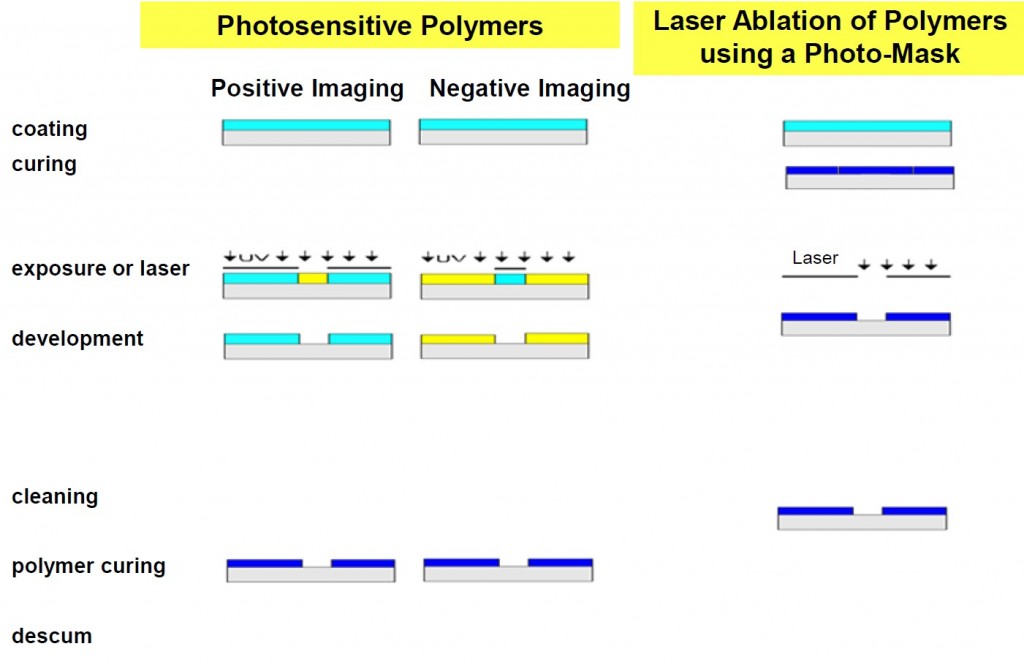 High absorption of UV radiation by polymers and poor thermal conductivity of the polymer result in etch depths per pulse in the 100 nm range with little thermal diffusion.Â  Scanning ablating allows for ablation of areas of 50 x 50mm at a time.

Materials suitable for Excimer ablation include:

Much finer vias can be produced with laser ablation, i.e 5um vias in 5um dielectric. Also since the ablation is done after cure, no polymer shrinkage occurs after the via is formed. A low cost polymeric cover layer is applied to catch debris during processing and is dissolved away after ablation.

With laser ablation non photo polymers which exhibit better thermal, mechanical and electrical characteristics than photo polymers can be used and such materials can use high loadings of nano-fillers which cannot be made photo-imageable.

John Hunt of ASE detailed â€śPolymer Innovations for Advanced Packaging Applications.â€ť Â John pointed out that every component and interface in the package must be carefully engineered. The variety of interfaces are shown below. 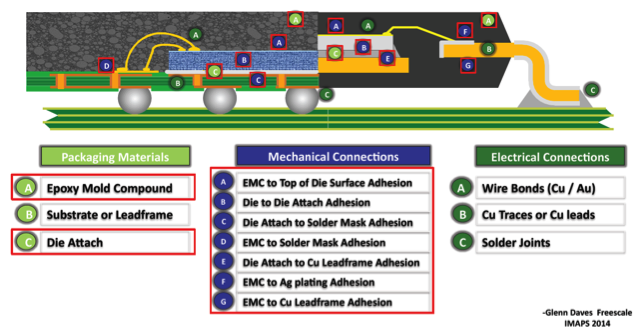 Multiple disciplines are necessary to develop materials for advanced packaging as shown below for underfills: 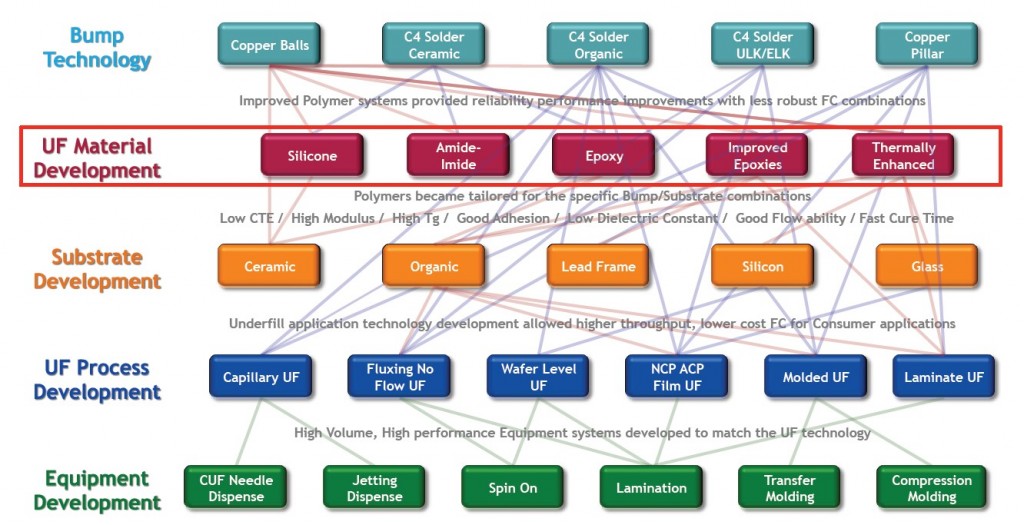 Many polymers are required for a single application for instance for 2.5D interposers: 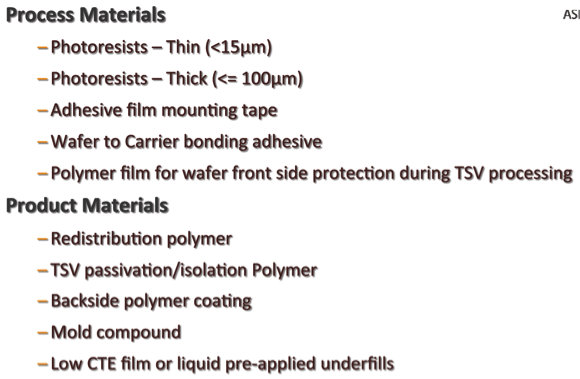 There is still significant room for improvement as shown below: 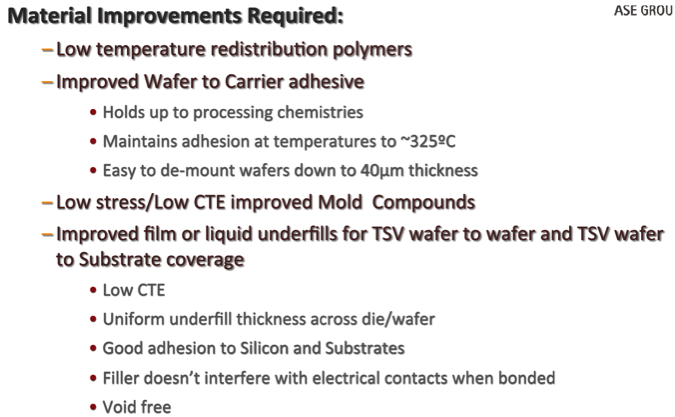 Daisaku Matsukawa of Hitachi Chemical described their attempts to produce a low temp curable, positive tone photo PI. For many years PI has been known to have excellent mechanical properties but very high curing temperatures. In the 1990s, curing temperatures of the most popular grades were 350ËšC+ .

Crosslinking a copolymer of preimidized PI and a phenolic containing moiety (see below) resulted in low temp cure PIs.

While x-linking with aliphatic and aromatic di-epoxides resulted in poor films, they found that heterocyclic epoxides resulted in materials with good PCT resistance and adhesion at low cure temperatures, i.e. 150 â€“ 200ËšC. Material properties are shown below: 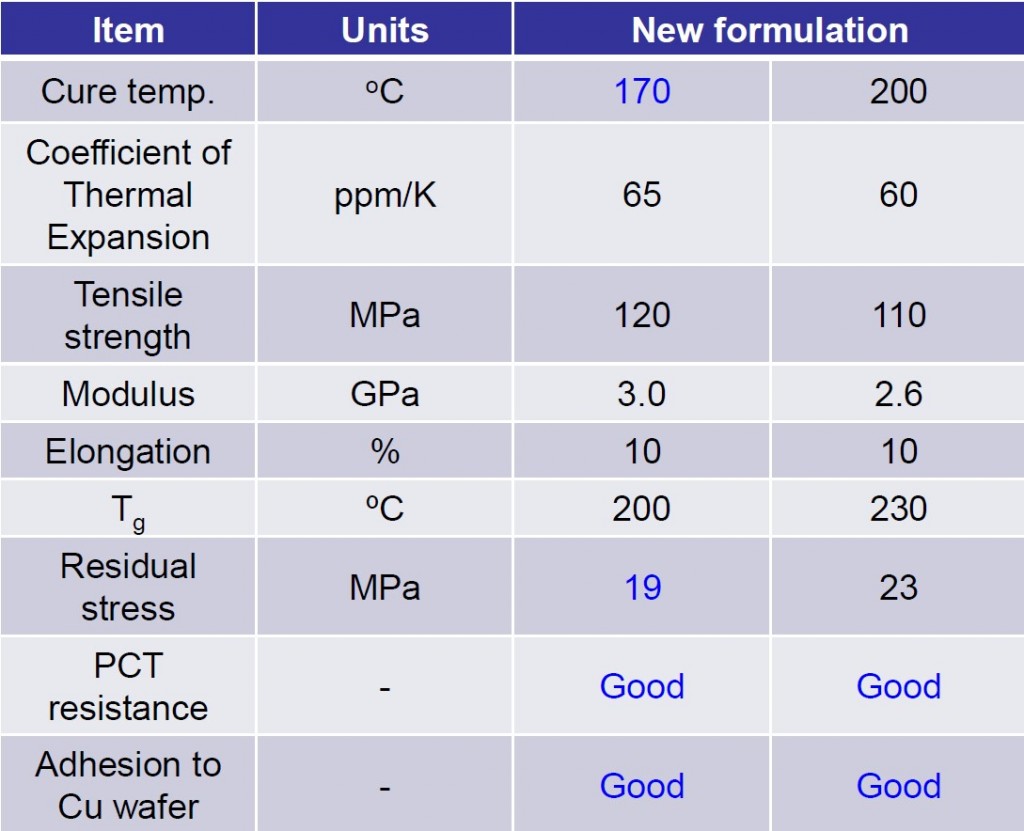 IFTLE notes: while the curing temperature has gone down into todays preferred range of less than 200ËšC the mechanical properties, once the main PI benefit, now look a lot like BCB and the Tg of the material now more resembles low Tg epoxy than PI or BCB. It will be interesting to see if such a material gains acceptance in the marketplace.