Reports a week ago indicated that â€śIt appears that IBMâ€™s sale of its microchip manufacturing business to GlobalFoundries had fallen apart.â€ť [link]

The local paper, the Poughkeepsie Journal, citing â€śanonymous sources with knowledge of the inner workings of IBMâ€ť, said the deal had been known under the codename Â â€śProject Next.â€ť Reportedly IBM managers at East Fishkill were told July 15th that the deal to sell its microchip unit to GlobalFoundries was off. The Journal quoted consultants who felt that such a deal would likely need clearance from federal agencies since IBM is a so-called â€śtrusted foundryâ€ť for the U.S. military and GlobalFoundries is owned by the government of Abu Dhabi [link].

Â Bloomberg reported on Aug 5th that â€śaccording to a person familiar with the processâ€ť, it was Â IBM offering to pay GlobalFoundries to take on IBMâ€™s money-losing chip-manufacturing operations [link].

According to Bloomberg contacts, IBM was offering about $1 billion to entice Globalfoundries to take the unit but Â Globalfoundries wanted $2 billion. Recall it has been reported that the IBM Semi business has been losing ~ $1.5B / year for several years.

It is likely that IBM requested GF continue operation of the two facilities to maintain supply of chips that they are using in IBM products. To do so GF would likely continue to incur similar losses and that may have outweighed acquisition of whatever IBM IP was to be included in the deal. IFTLEâ€™sÂ  understanding is that Burlington could be made to operate as an analog / specialty division, but East Fishkill (which reportedly cost $2.5B to build) should just be closed down because it is old and outdated.

With IBM semiconductor employees understanding that their division is no longer wanted by IBM corporate, many are jumping to GlobalFoundries which is actually setting up â€śjob fairsâ€ť in the IBM factory communities [link].

It appears to IFTLE that IBM does not have much leverage in all of this, but we will see as the drama continues.

In Dec 2013 Qualcomm, in a move that appeared to show impatience with the development of 2.5/3DIC infrasructure, announced an agreement with CEA-Leti, to assess the feasibility and the value of Letiâ€™s sequential (monolithic) 3D technology. In comparison with 3D-TSV technologies which Â stack separate die, sequential 3D technology proposes to process all the functions in a single semiconductor manufacturing flow. Thus, the technology allows connecting active areas at the transistor level, at a very high density as it uses a standard lithography process to align them.

According to Leti, this technology is expected to produce a 50% gain in area and a 30 percent gain in speed compared to the same technology node in 2D. They expect the Â sequential 3D technology will be much less complex and expensive to implement than sub 22nm nodes , making this technology a potential alternative to conventional planar scaling. At the recent Semicon West event in San Francisco, Olivier Faynot, devices department director at CEA-Leti updated the community on their results thus far. According to Faynot the design kit is ready since technology is standard CMOS processing. 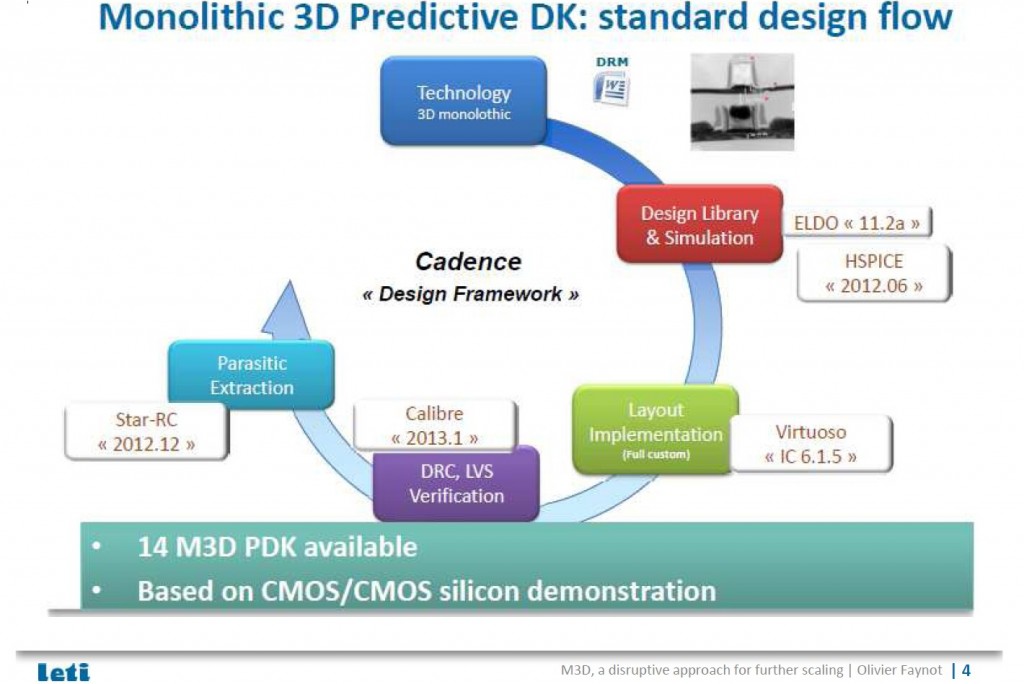 As expected, the issues are all thermal due to the sequential processing. 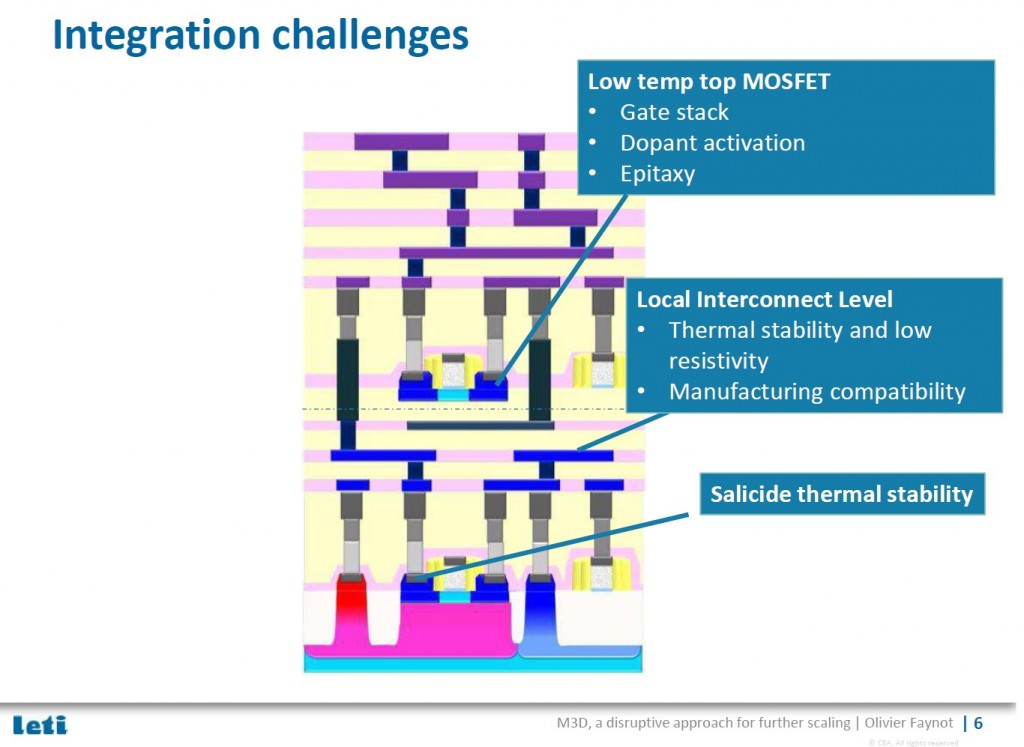 It is hoped that advanced laser processing will allow proper dopant activation without disturbing lower layers. 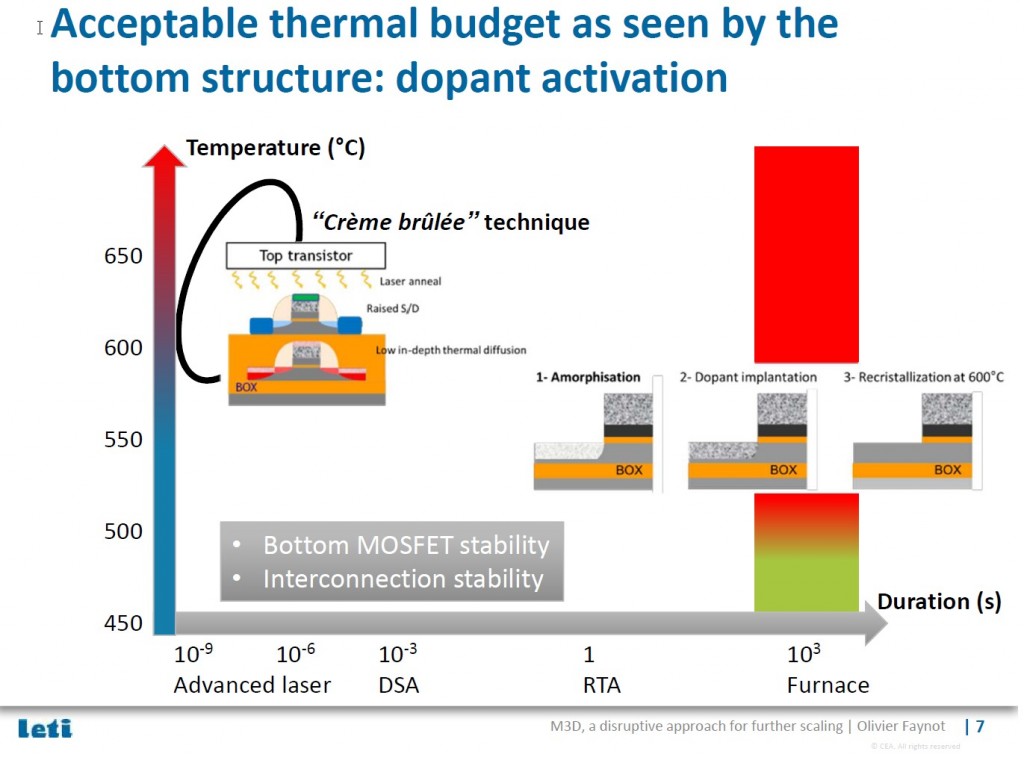 They report that initial results show thermal stability demonstrated up to 500Â°C at 28nm and 14nm SOI nodes.