For about a decade now, we have been awaiting the full commercialization of 3DIC. From the beginning most practitioners laid out a roadmap where CMOS Image sensors led the way followed by memory stacks, memory-on-logic, logic on logic and lastly the holy grail of heterogeneous integration where we could combine advanced semiconductor materials and different¬† functions, with high-density silicon CMOS technology.

A lesser publicized fact is that we are actually very close to functional heterogeneous integration thanks to the efforts of many participants in the DARPA sponsored COSMOS and DAHI programs.

The development of non SI based semiconductor (compound semiconductors, CS) electronics has been motivated by their superior materials properties relative to silicon. For example, high electron mobility and peak velocity of InP-based material systems have resulted in transistors with fmax above 1THz. The wide energy bandgap of GaN has enabled large voltage swings as well as high breakdown voltage RF power devices and the excellent thermal conductivity of SiC makes tens of kilowatt-level power switches possible [1]

DARPA proposes ¬†that the future of CS electronics depends not on displacing Si, but rather on heterogeneous integration of compound semiconductors with silicon technology in a way that will take advantages of the two technologies when combined.

However, MCM techniques have been limited by I/O parasitic effects between chips in such modules and by device and interconnect variability issues. Many of the limitations including I/O parasitics and phase mismatch are governed by the length of separation between CS and Si CMOS devices, and as such, reduction of this separation is expected to yield dramatic improvements in performance of heterogeneous integrated circuits. 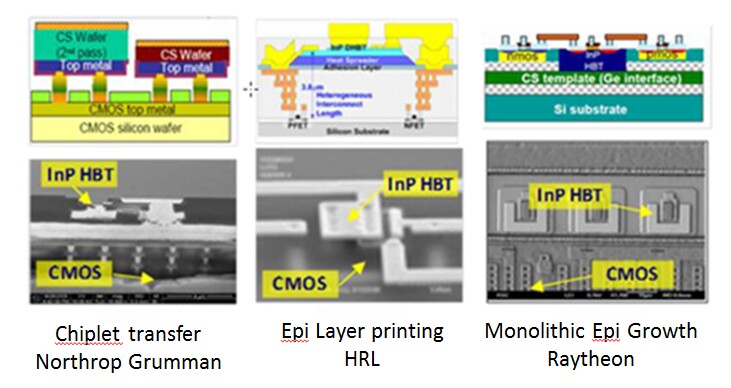 The Northrop Grumman technology starts with a completely fabricated standard CMOS wafer. A separately fabricated InP HBT wafer (thinned to approximately 55u m) is mounted to a glass carrier. An InP wafer is etched to form individual chiplets (still attached to the carrier wafer). The CMOS wafer is prepared for integration with the InP chiplets by depositing gold (Au) micro bumps (3-10um and 2um thick). The glass carrier containing the singulated InP chiplets is then aligned to the CMOS wafer, and the bonding operation performed using standard wafer bonding equipment with controlled time, temperature, and bonding force. The glass carrier wafer is then released, leaving the singulated InP chiplets connected to the base CMOS wafer. This is shown schematically below. 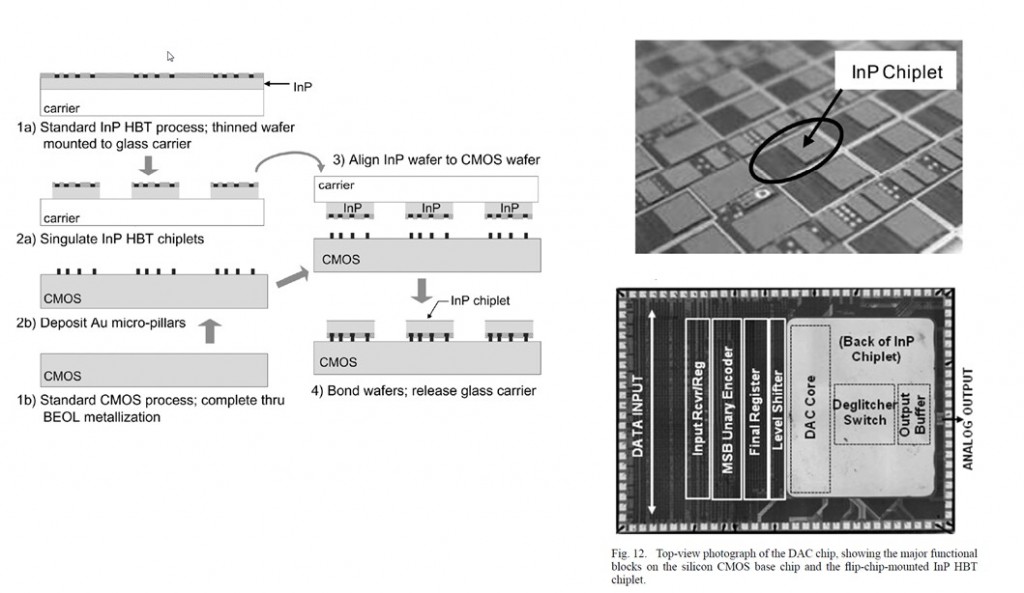 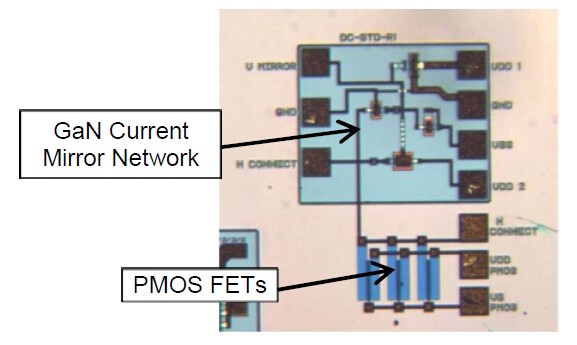 DAHI (Diverse Accessible Heterogeneous Integration) ¬†initiated in 2013 is based on its predecessor COSMOS and is composed of several design, technology and manufacturing thrusts including :

At the recent DAHI program review in Boulder participants shared their technology progress to fabricate multilayer circuit structures (i.e InP, Si, GaN) on substrates such as SiC using 3DIC technologies such as TSV and oxide-oxide bonding.

The ¬†goal of DAHI is to establish a manufacturable, accessible foundry technology for the monolithic heterogeneous co-integration of diverse (e.g., electronic, photonic, MEMS) devices, and complex silicon-enabled architectures, on a common substrate platform for defense and commercial users. By enabling the ability to ‚Äėmix and match‚Äô a wide variety of devices and materials on a common silicon substrate, circuit designers can select the best device for each function within their designs. ¬†This integration would provide DoD systems with the benefits of a variety of devices and materials integrated in close proximity on a single chip, minimizing the performance limitations caused by physical separation among devices.

As these technologies become public, IFTLE will keep its readers apprised of the results.

For the latest in 3DIC and advanced packaging, stay linked to IFTLE‚Ä¶