There is an old proverb that states â€śAll things Come to Those Who Wait.â€ť It is exemplified by the French cartoon (below) showing a cat patiently waiting for a mouse to exit his hole in the wall. I personally am not the waiting type wanting to get things done ASAP but most civilizations look at patience as a virtue. 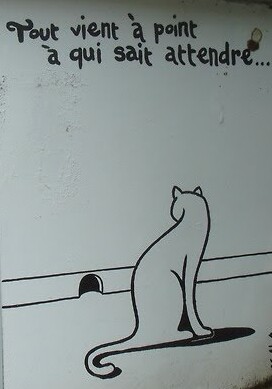 Now having said that, let me counter by saying that â€śAll things donâ€™t come to those who waitâ€ť. I waited for thin filmÂ  MCMs to take off in the 90â€™s and early 2000â€™s and they never did. Â A lot of us gambled and in that case – lost. Life is a gamble !

TSV technology and 2.5/3D has had its ownÂ  dichotomy. We couldnâ€™t sit back and allow others to get there first so we all anteed up our time and money without any assurance that there is big money to be made on this technology. Like the cat, we have been waiting (some more patiently than others) for 2.5/3D to enter HVM when in fact there has been no assurance that the mouse wasnâ€™t going to exit from another wall (i.e another technological solution as happened in thin film MCMs).

Anyone who understood what TSV technology could bring to the party, knew that HVM and actually new product design itself could not expand until foundry technology was available (since TSV were/are clearly going in during chip fabrication) and memory stacks were available, since foundries donâ€™t make DRAM. Of course it all has to be at the right price, but if its not even available, what matters the price?

In terms of foundries TSMC [see: IFTLE 122, â€śTSMC officially ready for 2.5Dâ€¦.â€ť, ] was the first to announce and GlobalFoundries is not far behind [see; IFTLE 142, Â â€śGlobalFoundries 2.5 / 3D at 20nmâ€¦â€ť or IFTLE 164, â€śSemicon Taiwan contd: GlobalFoundries Manocha Interviewâ€ťÂ  ] so those at the leading edge can now design in 2.5D. But what about memory ??

While UMC [see: IFTLE 135, â€śUMC / SCP Memory on Logicâ€¦â€ť and a few others have made noise about entering the 3D market space they appear to be significantly further behind.

The status of memory

Memory, as IFTLE has noted several times, has been slower coming.

The DRAM industry has been undergoing significant consolidation in the last few decades. The recent acquisition of Elpida by Micron has left 3 major players in the DRAM business as shown below. 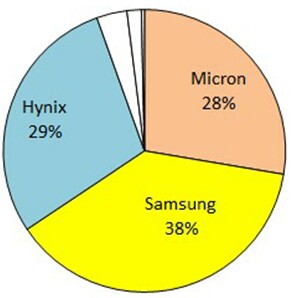 With DDR architecture running into a brick wall the memory suppliers have been focusing on new architectures that will deliver lower power, higher bandwith memory solutions. Â These include wide IO-2, HBM (high bandwidth memory) and HMC (hybrid memory cube).

Definition, standardization and scale up of these memory technologies has simply taken longer than any of us would have liked, but these are the new architectures what will take advantage of TSV stacking technology.

TSMC has recently compared the different memory architectures relative to DDR and one anotherÂ  in terms of bandwidth vs power and price.

I compare the technologies below.

As we head into the fall of 2014 the last probably most important of the big 3 memory suppliers, Samsung, Â has now announced production of TSV based memory stacks [see: IFTLE 209, â€śSamsung announces TSV based DDR4 â€¦.â€ť ].

So we are about to have HBM for graphics modules, wide IO-2 for mobile products and HMC for HPC and high end servers. Now there can be no more excuses.

Within the next 18 months, if we do not see product introductions announced, Â 2.5/3D will begin to fade away until it is only remembered as another one of the bad bets we made attempting to stay on the leading edgeâ€¦

For all the latest on 2.5/3DIC and advanced packaging, stay linked to IFTLEâ€¦