At the recent 2015 Int Image Sensor Workshop, Ray Fontaine of Chipworks presented a review of â€śThe State-of-the-art of Mainstream CMOS Image Sensorsâ€ť Chipworkâ€™s estimate, from other market research firms, is that the CIS market in 2014 was ~ $9B. Of this total it is estimated that Sony, Samsung and Omnivision hold > 66% market share driven by mobile phone and tablet camera chips.

Their look at the patent literature shows the field continues to grow with 2500 patents filed in 2014, the majority of them being processing patents. 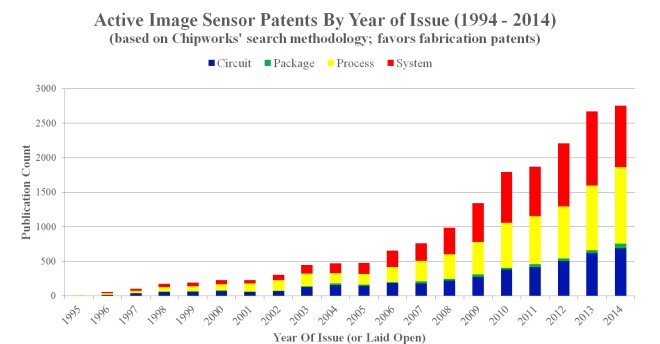 3D stacked CIS became a reality in 2012 when Sony announced the worlds first stacked chip CIS in consumer cameras. In 2013 they introduced the 8 MP ISX014 in a tablet computer [ref]

The first gen chips employed via last TSV to connect pads on the Sony 90nm CIS die to the pads on the Sony 65nm ISP. The die stack was partitioned such that most of the functionality of a conventional system-on-chip (SoC) CIS was implemented on the ISP die; the CIS die retained the active pixel array, final stage of the row drivers, and comparator portion of the column-parallel ADCs. The CIS (left) and ISP die (right) are shown below.

In 2014, Sony announced they were using TSMC as a foundry for the 40nm ISP wafers on the Apple iPhone 6/6 Plus iSight cameras. These chips incorporate Sony 90 nm CIS wafers and TSMC 40 nm ISP wafers.

In 2015, Samsung and OmniVision have both been sampling small-pixel, stacked chip CIS.

Given the continued, aggressive stacked CIS development underway from independent device manufacturers (IDM) and foundries itâ€™s predictable that stacked chip adoption will occur very rapidly over the next few years.

IEEE 3DIC 2015 will cover all 3D integration topics, including 3D process technology, materials, equipment, circuits technology, design methodology and applications. The conference invites authors and attendees to submit and interact with 3D researchers from all around the world. Papers are solicited in subject topics, including, but not limited to: