For nearly two decades, the industry has eagerly awaited the yearly release (early in the first quarter of each year) of the so called ‚ÄúMcClean report‚Äù issued by IC Insights, which documents and projects the status of our industry.

A fall forecast seminar was just held in Sunnyvale detailing how global economic conditions and emerging developments have reshaped sales forecasts unit shipments and pricing trends for the balance of the year through 2019.

The major message was that semiconductor industry growth, initially pegged at 7% at the beginning of the year, will be closer to 2% and will rise only 4.9% on a compound basis by 2019 to $450B. 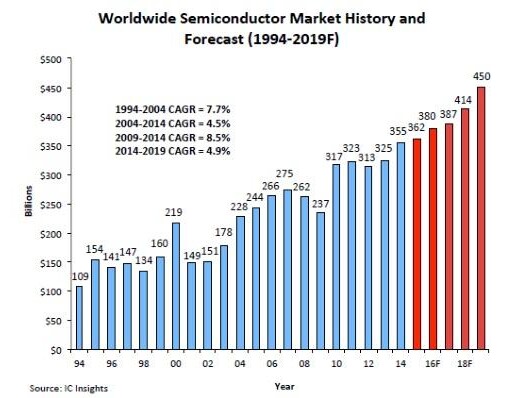 Although IC unit sales are expected to increase ~6%, ASP are falling ~5%, leaving the market flat.

McClean was quoted by EE Times as saying: ‚ÄúWe won‚Äôt have a big cycle in semiconductors till there is a big cycle in GDP growth, and it doesn‚Äôt seem like its coming‚Äù adding that ‚ÄúIn general IoT doesn‚Äôt look like the savior for returning this industry to 10% growth rates‚Ä¶something could hit with tremendous impact very quickly ‚Ä¶ [but] the world‚Äôs still looking for the next big thing in technology,‚Äù and when discussing 450mm wafers, ‚ÄúFive years ago I was 95% sure it would happen in about five years, now its 50/50 whether it happens at all.‚Äù

Their new assessment of top growing IC Markets is shown below:

When looking at the next gen logic/foundry process roadmaps, McClean points out that Intel has just pushed out the 10nm node to 2017. 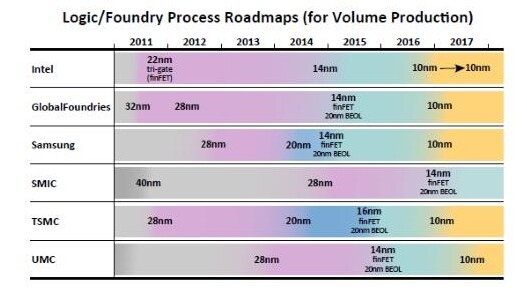 IFTLE has noted several times that the money is made on the leading edge and that‚Äôs the main reason to make sure you are keeping up. Well McClean‚Äôs latest plot of TSMC‚Äôs revenue ramp shows this is spades. At the 45 node it took eight quarters to achieve 20% of total sales, five quarters at the 28 node, and just three quarters at the 20 node.