Consolidation in our maturing industry is the ONE most important this that is happening to microelectronics in the 21st century because this is/will set the playing field for everything that follows. Many of you will be working for massive new companies soon whether you know it or not. This is something you really should be paying close attention to.

Consolidation continues with the recent announcement that Lam will acquire KLA-Tencor in a cash and stock transaction. The combined company will combine Lamâ€™s capabilities in deposition, etch,Â and clean with KLA-Tencorâ€™s capabilities in inspection and metrology. The combined company will have ~ $8.7B annual revenue making it roughly the same size as AMAT.

There will likely be opposition from some in the semi industry but probably less so than for the AMAT/TEL proposed merger since there is really little overlap in their focus markets.

The hard disk drive segment of our industry reached maturity ~ 2011. The hard disk drive business started in the 1960â€™s. Since then the > 200 companies who have been in the business competed on data density and latency and smaller form factors. Most of that industry has long since vanished through bankruptcy, mergers and acquisitions. As expected for a mature industry segment there are now 3 surviving manufacturers – Seagate, Toshiba and WD. Seagate acquired Samsungâ€™s HDD business in 2011; Western Digital (WD) merged with Hitachiâ€™s HDD business in 2011 and Toshiba acquired Fujitsuâ€™s HDD business in 2009. This divided up the HDD market into WD 48%, Seagate 40% and Toshiba 12%.

Growth in mature industry segments requires acquisitions in aligned fields. Thus it could have been expected that WD would make a move into other types of data storage. WDâ€™s acquisition of SanDisk gives the company an instant foothold in the global, non-volatile NAND flash memory market.

With the PC HDD business in decline due to both a weakening PC market and solid state drives (SSDs) making major inroads into that market, WD needed access to NAND storage technology both for laptops/desktops and to maintain competitiveness with NAND players in the enterprise space. This acquisition will allow WD to expand its participation in higher-growth memory storage segments.

It is reported that WD will have to raise $18.4 billion to financeÂ the $19B SanDisk acquisition. In September WD announced that Chinese state-backed Unisplendour Corporation ( a subsidiary of Tsinghua Holdings ) would be investing $3.8B for 15% of WD â€śto help facilitate growth and future strategic initiatives.”

For those of us that have been following 3D with TSV since its inception, we recall that Toshiba was responsible for one of the early milestones, namely it was Oct 2007 that Toshiba announced the commercialization of their â€śchip scale camera moduleâ€ť which used â€śthrough chip vias.â€ť Although it was only a one layer device, it marked the first mainstream commercial use of TSV in the silicon chip industry. By the way that was reported in one of my very first blogs in PFTLE, the predecessor to IFTLE which ran for several years in the now defunct Semiconductor International magazine. At that time PFTLE predicted that the CMOS imaging chips would eventually be broken up into functions and stacked. Sony brought that concept to commercialization a few years ago. [ see IFTLE 172, â€śIFTLE 172 Sony TSV Stacked CMOS Image Sensors Finally Arrive in 2013â€ť ]

Whatâ€™s the inside info on InFO. Try as you might, despite the significant press it has received, you cannot point to a publication that clearly outlines the process flow for TSMCâ€™s InFO package. I have been asked whether it is chips first or chips last and all I could answer was: â€śGood question.â€ť

Well, sources in Asia have leaked the following process flow to me. Although I cannot guarantee this is the actual TSMC InFO process flow (until Doug Yu confirms it) Iâ€™ll none the less show it to you since it is a quite interesting flow. The answer to the question for this process flow is chips first or interconnect last. Die are placed face up, pillars are plated on die and then molded. Routng to the package BGA balls is through mold vias (TMV). The wafer is then polished down to reveal tops of Cu pillars and standard” RDL is processed up from there. Ability for finer features appears to come from more planar starting surfaces and betterÂ controlsÂ of photo processes. IFTLE would guess that warpage is the major problem for this process flow.

As it has for the last decade, 3D ASIP will once again close out the packaging conference season with its mid December 3DIC focused meeting outside of SF.

The 12th annual 3D Architectures for Semiconductor Integration and Packaging, or 3D ASIP as it has become known, will be held December 15-17, 2015, at the Sofitel San Francisco Bay Hotel in Redwood City, Ca. It is the longest running conference on 3DIC focused on commercialization and infrastructure.

â€śThis year, 3D ASIP will honor two trailblazers in 3DIC, Peter Ramm, Fraunhofer EMFT and Professor Mitsumasa Koyanagi,Â Tohoku University. They will be honored for their early pioneering work in the 1990s that set the stage for what we today know as 3DIC. Following the award ceremony, each recipient will deliver a short presentation on his groupâ€™s early work in 3DIC. 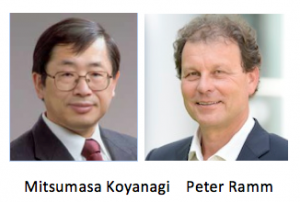 Plenary presentations will be delivered by Brandon Prior, Prismark, discussing the status of 2.5/3D and other high density technologies; Rozalia Beica, Yole DĂ©veloppement, comparing and contrasting the new 3D memory architectures; and DC Hu, Unimicron, reviewing the transformation of substrate technology.