IMAPS 2015 also known as the 48th International Symp on Microelectronics was held this past Oct in Orlando, FL. Umi Ray of Qualcomm was General Chair and Erika Folk of Northrup Grumman was Tech Chair. There were 30 sessions, > 150 presentations and > 135 exhibit booths. Certainly, in terms of microelectronic packaging, this is the largest annual exhibition in the USA. In the next few weeks we will take a look at some of the presentations that caught the eye of IFTLEā¦

First, letās first take a step back to one of the best boxing movies of all time, ROCKY. In 1976, Sly Stallone (who by the way spent his early years growing up on my block in Hellās Kitchen, NYC) wrote and starred in this rags to riches American Dream story of Rocky Balboa, an uneducated but kind-hearted boxer in the slums of Philadelphia who gets a shot at the world heavyweight champion Apollo Creed, and looses the fight. The film earned three Oscars, including Best Picture. In 2006, the film was selected for preservation by the Library of Congress as being āculturally, historically, or aesthetically significant.ā

Anyone who saw the film at the time will never forget the single line that ended the movie. As the ring announcer is proclaiming Creed the winner, Rocky, with both eyes swollen shut, is shouting out āAdrian!, Adrian!ā calling for his girlfriend (Talia Shire) . It brought grown men and women to tears. [link]

Anyway after many sequels, none of which came anywhere near the quality of the original, fast forward to 2015 and the movie āCreedā where Adonis Creed, Apolloās son asks Rocky to become his trainer after no one else will work with him. In a strange twist of fate Creeds son also ends up fighting against the champion and looses but āā¦though he lost the fight, Creed won the nightā. For his performance, Stallone has been nominated for the Golden Globe Award for Best Supporting Actor in a Motion Picture, his first nomination since the original Rocky, 40 years ago. Certainly a comeback for Rocky!

So you ask yourselves where is IFTLE going with this? Be patient.

I want to start our look at IMAPS 2015 with the presentation by the new Yole Developpement packaging team on the technology and market trends for WLP. You may wonder why I focus on this technology which was Leading Edge literally 20 years ago. Certainly it is near and dear to my heart since many of my most exciting days in technology were shared with the WLP pioneering groups at Flip Chip Technologies (FCT) and Microelectronics Center of NC / Unitive as this initial wafer level technology was being conceived and developed with my team developing BCB. These two small startup companies certainly were underdogs, and they were using my new dielectric, also an underdog, but within 2 years we were in nearly every cell phone made in the world.

Since itās inception by Rajen Chanchani at the Boston IMAPS conference in 1994 to the commercialization of the UltraCSP by Pete Elenius of FCT in 1998, what was at first one of many chip sized package solutions evolved into wafer level chip scale packaging and then more simply into wafer level packaging or WLP.

[for a complete history of bumping and WLP see āOn the Origins, Status, and Future of Flip Chip & Wafer Level Packaging,ā A. Huffman, P. Garrou, (link)]

By the early 2000ās it became obvious that WLP had unmatched advantages in both form factor and cost and the technology was quickly licensed by all the key OSATS and OEMs worldwide and adopted in nearly all mobile phone products. 20 years ago this was the leading edge and those working in the area and finding success felt like this [link]:

Yole points out that although WLP has been seemingly out of the spotlight with the advent of higher density packaging solutions such as copper pillar bump, 2.5 & 3DIC and fan out and embedded packaging, WLP remains a highly important and constant presence. The mobile market continues to be the main driver for WLP with over 90% of all fan in packages being found in handsets and tablets.

Since the WLP eliminates the need for WB, substrates, FC bumps and in most cases mold compound, it still results in the shortest interconnects, lowest parasitics, and best electrical performance in terms of speed and frequency. Bump pitch of 0.35mm are currently in high volume production with 0.3 and 0.25mm under consideration. Most fan-in die are below 7 x 7mm and below 200 I/O. In general warpage and board level reliability for larger dies remains a concern. If your die is relatively small and your I/O demands relatively low, this is the best packaging solution. 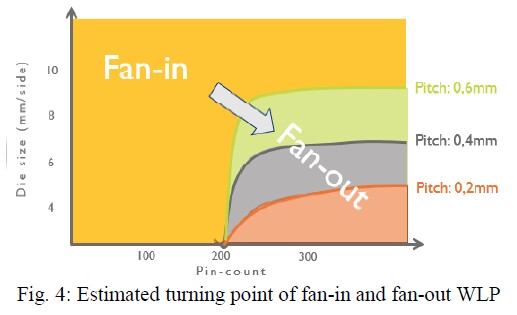 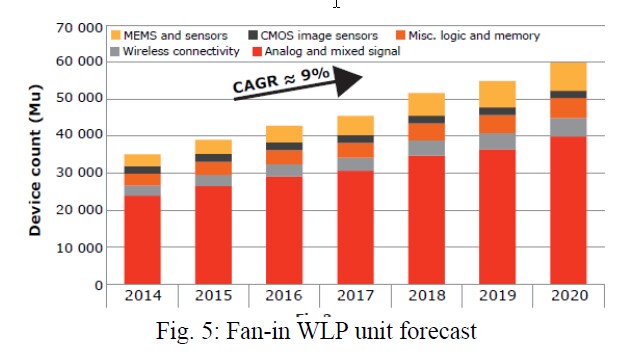 Yole has identified more than 70 high volume fabless and IDM companies implementing their designs in fan-in WLP along with over 20 fan-in manufacturing companies.

What the Future Holds for WLP

In the future IoT (Internet of Things) will eventually succeed mobile phones as the microelectronic driverā¦the big dog. However, there have been many unjustified presentations over the last few years detailing, without any support data, how IoT will drive leading edge, high end technologies like 3DIC. IFTLE does not agree with that conclusion but rather contends that IoT will be low I/O and will demand two things ā small form factor and low, low cost. As such IoT will generate a huge potential market for fan-in WLP.

Back in the mid 1990ās, WL-CSP was an underdog who proved itself and became an integral part of cell phone manufacturing and, now after being somewhat overshadowed by newer leading edge technologies for a while, is about to make a comeback due to the inherent strengths of this technology. Anyone care to bet against it?

For all the latest in 3DIC and other advanced packaging technologies, stay linked to IFTLEā¦