Sony Samsung and Omnivision are locked in a technology battle for superiority in CMOS image sensors. While Sony has the lead in stacking technology, i.e. stacking the sensor on top of the image processor and connecting them with TSVs, OmniVision and Samsung quickly adopted the same technology and gained design wins using stacked chip products.

Rumor is that Sony will be working with GlobalFoundries on chip stack CIS, instead of Samsung to avoid any conflict with Samsung who is also in the CIS business.

We recently updated the latest from Sony [see IFTLE 272] Now lets look at some of the latest activity from Omnivision and Samsung.

The Omnivision OV13860 introduced in late 2014 is a 13 MP back side illuminated sensor with 1.3um pixels (actually larger than other 13MP sensors). It is the first Omnivisionâ€™s CIS built with stacked die technology which separates the imaging array from the image sensor processing circuits in the stacked structure. This allows for more functionality to be incorporated on the sensor die while resulting in a smaller size due to the stacking. [link].

Omnivision then announced the OV16850, a 16MP imager for smartphones. Using an 1.12um pixel and leveraging OmniVisionâ€™s stacked die technology, which captures stills and video in native 16:9 aspect ratio. This was followed by the OV23850 a 23.8 MP high resolution CIS. (images below [link] 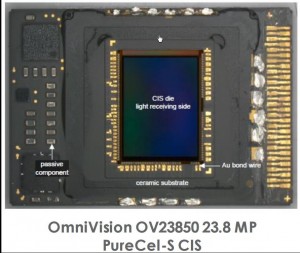 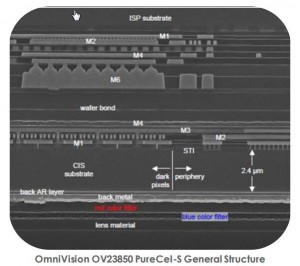 Samsungâ€™s first entrant into stacked technology with TSV was also at 16MP with the Samsung S5K3P3SX in late 2014. The CIS die is face-to-face bonded to a 65nm Samsung image signal processor die and connected with W based TSV. The CIS die is fabricated on a 65nm CMOS process with 5 levels of interconnect as shown below. [link] 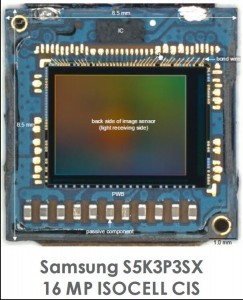 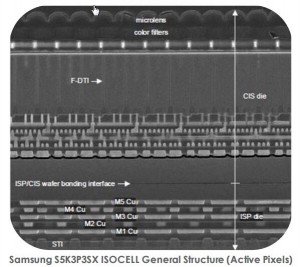 The Apple iPhone 6s now has a â€śtouch IDâ€ť fingerprint sensor embedded in the Home button.

While it is now used for unlocking the phone , it will also be used for identification purposes for Apple Pay mobile payments. It will also probably be used for other online services in the future.

The new device has the same structure and capacitive technology as the previous one, but with changes in sensor design and packaging.

The 12.5×10.9mm sensor is incorporated within a rectangular shaped housing composed of a stainless steel ring and an aluminum base. The sensor is protected by a sapphire window coated with two different materials and supported by innovative assembly of dies and flex PCB. The finger print sensor allows it to scan the fingerprint just by pushing the button. The sensor has a resolution of 10,752 pixels with a pixel density of 500ppi. It uses a capacitive touch technology to take an image of the fingerprint from the sub epidermal layers of the skin. 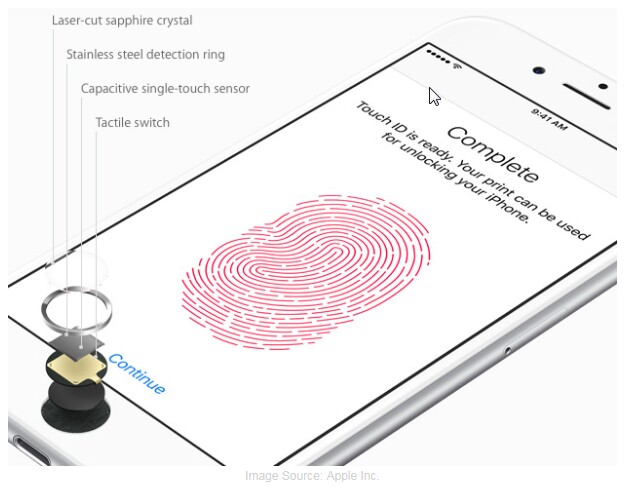 The new sensor has two die, a sensing die manufactured with 65nm CMOS technology and an 0.18um ASIC logic die. The new sensor is implemented with TSV (shown below) which allows a better packaging and connection to the flex connector. 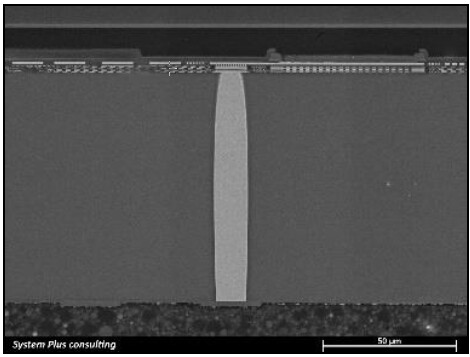