Recently, consolidation has hit the conference circuit, much the same as it has hit the corporate world. The 2016 IMAPS Polymers Conference which we will discuss below focuses, as you might imagine, on the use of polymers in microelectronics. It has been a biennial conference sponsored 15X by DuPont and was held in Wilmington DE. It was acquired by IMAPS and for now continues to operate at the Wilmington location.

IMAPS has also acquired the RTI 3D ASIP Conference. As you may know, 3DASIP is the longest running 2.5 / 3DIC conference focused on commercialization and infrastructure. The IMAPS supported 2016 meeting will be held December 13-15th, at the Marriott San Francisco Airport Hotel in Burlingame, Ca. As in years past, all presentations will be invited.

Continuing in the technical direction that was started last year, 3D ASIP will grow its focus on not only 2.5 and 3D IC, but other competitive high density packaging technologies that are being developed. With the ending of the Ga Tech interposer conference they have asked Corning to join the polymer conference and provide a session on the status of this technology.

There will be two AM tutorials, plenary presentations to start off each day and (8) sessions structured and developed by 8 â€śtopic leadersâ€ť who will develop their 3 or 4 paper sessions and serve as session chairs.

Continuing in the Winterhaven DE site that has held these meeting for many hears, the conference was spearheaded by a 6 person steering committee and a 6 person advisory board.

Amandine Pizzagalli of Yole gave a nice presentation on the use of polymers in advanced packaging platforms. The following generic packaging slide first breaks down technology options into leadframe packages vs substrate based and non substrate based packages etc. Another conclusion from this slide which John Hunt made in a later talk was that ALL packages are fan out except wafer level packages.

Their wafer count forecast shows that while fan out shows the strongest growth rate, FC based packaging is responsible for > 75% of all adv packaging wafer count through 2020.

In the fanout panel packaging session John Hunt of ASE made the point that while fan out today has taken the connotation of â€śeWLBâ€ť packaging, it truly has been around forever since all packaging except wafer level is fan out including all leadframe and substrate packaging. He showed the following chart for ASE fan out package offerings ad noted that ASE like many others were focusing on panel level processing to attempt to cut costs. 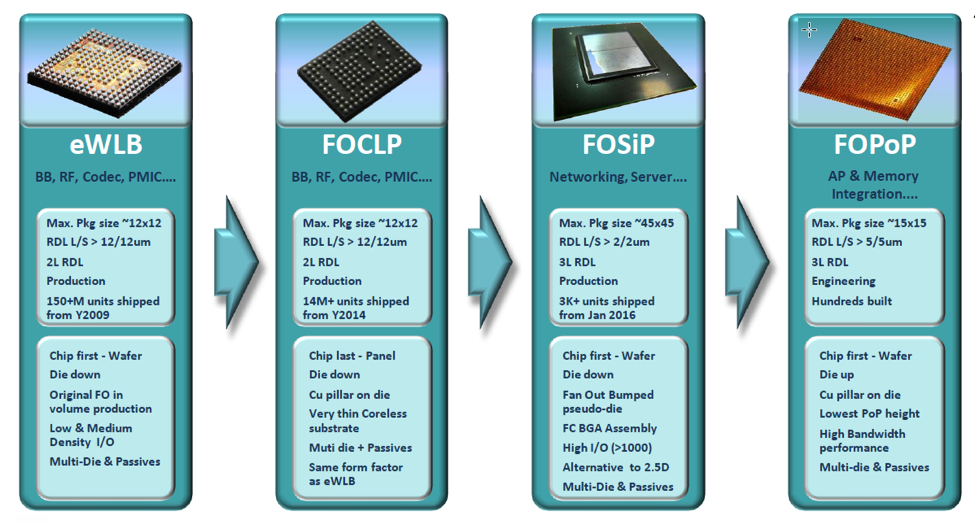