Continuing our look at IEEE ECTC 2016:

At the recent IEEE ECTC Conference in Las Vegas, Mike Ma of Siliconware compared various die stacking and integration options with TSV Si interposers. From his perspective there are four main stacking platforms for 2.5D IC in advanced packaging. They are shown in the figures below.

The interposer is diced and attached to a silicon carrier which is coated with temporary adhesive film. The carrier provides handling and warpage control capability, i.e. the silicon interposer warpage can reportedly be controlled to within 10um during high reflow peak temperature. After that, the top die can be sequentially attached onto interposer with flux and joined together via mass reflow then followed by an underfilling process. Then the silicon carrier is de-bonded and the individual chip module attached onto blue tape film frame and ready for substrate assembly just as usual traditional FCBGA process.

In CoS, the interposer, ( ~ 100um thick) is die bonded to an organic substrate followed by assembly of top multiple active chips. If the substrate warpage is opposite the interposer (interposer warped up and substrate warped down is usual) , there are risks of electrically open or short failures happened after die bonding process because C4 bump height can‚Äôt overcome the gap change between TSI and substrate during the die bonding thermal excursion. Thermal compression bonding (TCB) is used to keep a stable gap between the interposer and the substrate during the die bonding process. In addition, Non-Conductive Paste (NCP) or Anisotropic Conductive Paste (ACP) are used. 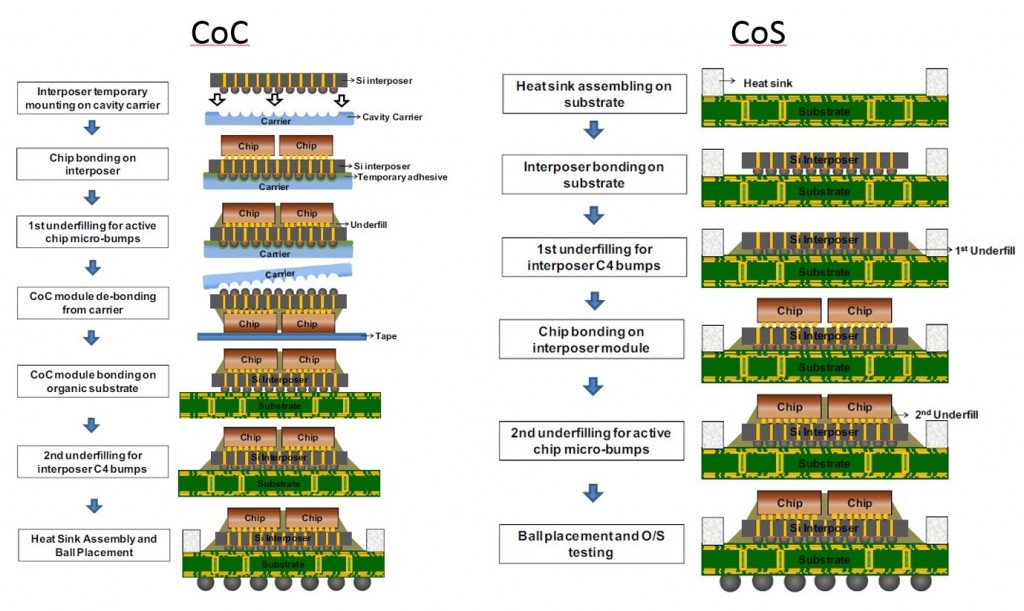 After micro bump bonding, underfilling and molding the wafers are ground down to expose the chip tops. The wafers are then flipped and temporarily bonded to a support wafer, the interposer vias exposed and bumped. The modules are then de-bonded from the carrier to a tape ring. Finally, the modules are FC BGA assembled on the organic BGA substrates

After interposer is prepared to receive chips to top surface, it is flipped and supported on a carrier for backside reveal, RDL and bumping. It is then flipped onto a second carrier and he chips mounted, underfilled and molded as before. 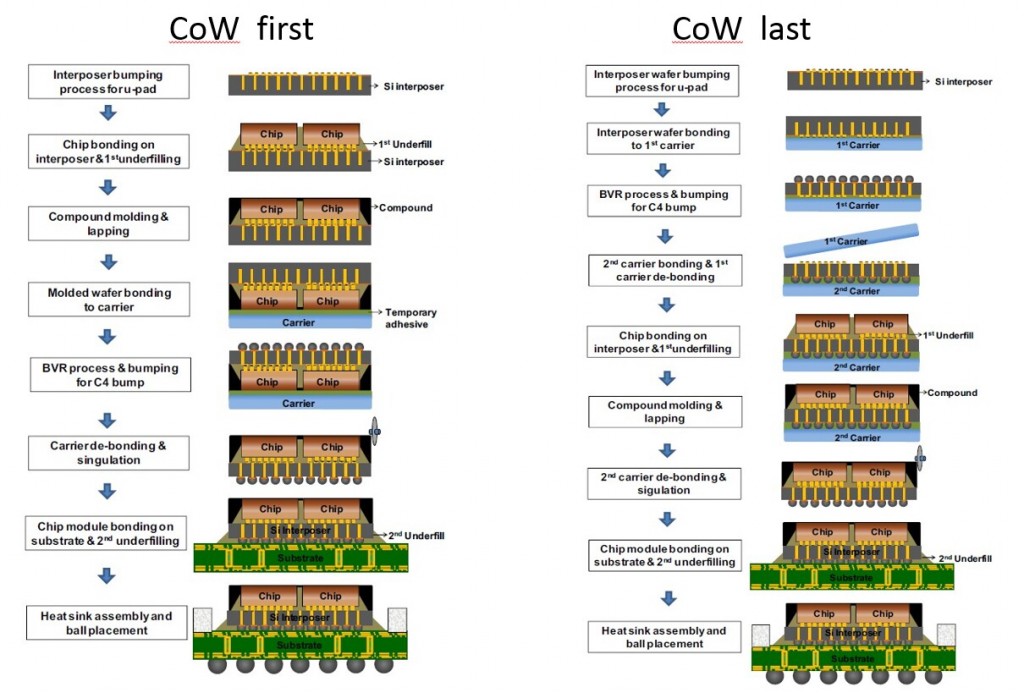 Comparing to the CoW first process with TSV, die bonding assembly portions are the same, but there are differences in the interposer fabrication. Instead of completing micro-bumps process first, RDL and PSV are implemented first and followed by UBM process. Since TSV-less platform has no interposer in its final form, the carrier can be either glass or silicon. After the carrier bonding process, instead of the usual backside reveal process, the TSV-less interposer will be partially removed by mechanical grinding followed by wet etching to completely remove silicon portion and stop on the remaining passivation layers. The passivation layer is then patterned to expose contact areas for further C4 bumps. Further assembly including the chip module on substrate processes are the same as described for CoW first.

Ma compared the chip stacking options in the chart below. 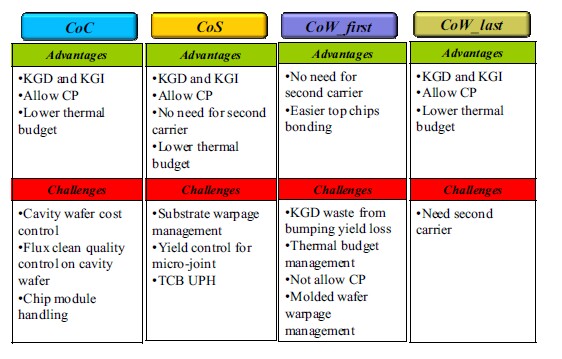 Editorial correction: In IFTLE 298 IFTLE inadvertently assigned credit for the ‚Äú20um Pitch Thermo Compression Copper Pillar Bonding‚Äù work to IMEC instead of rightful authors at IME. This should have been corrected by now, but we did want to offer our apologies for this error.