The 2015 International Technology Roadmap, was released earlier this summer by the SIA (Semiconductor Industry Association). It can be accessed here [link].

If there were any practitioners left who were still denying that scaling has come to an end, this report drove a stake into their heart. No longer snickering at the ‚Äúconspiracy theory‚Äù, all major organizations have now accepted the reality of a future without scaling. Even Popular Mechanics is reporting this as a major event [link]. 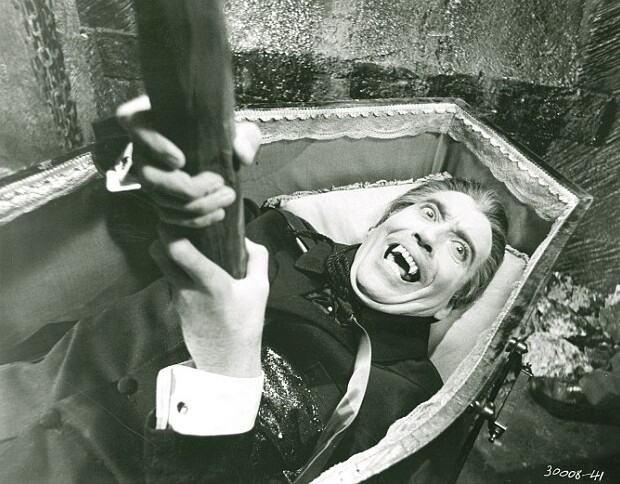 As REM would say :

Some will still argue that the discussion has been about Moore‚Äôs Law, not scaling. They will argue that Moore‚Äôs law¬Ýsimply predicts a doubling of transistor density within a given¬Ýintegrated circuit, not the size or performance of those transistors. To me this is just semantics. First of all More‚Äôs Law is not a Law. It is an observation. Secondly, we all know that Moore‚Äôs Law and scaling, to most in our industry had become synonymous over the years.

In the recent IEEE Spectrum article ‚ÄúTransistors Will Stop Shrinking in 2021, Moore‚Äôs Law Roadmap Predicts‚Äù the authors note ‚ÄúAfter 2021, the report forecasts, it will no longer be economically desirable for companies to continue to shrink the dimensions of transistors in microprocessors. Instead, chip manufacturers will turn to other means of boosting density, namely turning the transistor from a horizontal to a vertical geometry and building multiple layers of circuitry, one on top of another.‚Äù [link]

In fact the ITRS changed its predictions from their 2014 report, when they said that miniaturization would continue until at least 2028. The following figure (from the IEEE Spectrum article) very clearly points out the new ITRS conclusion. 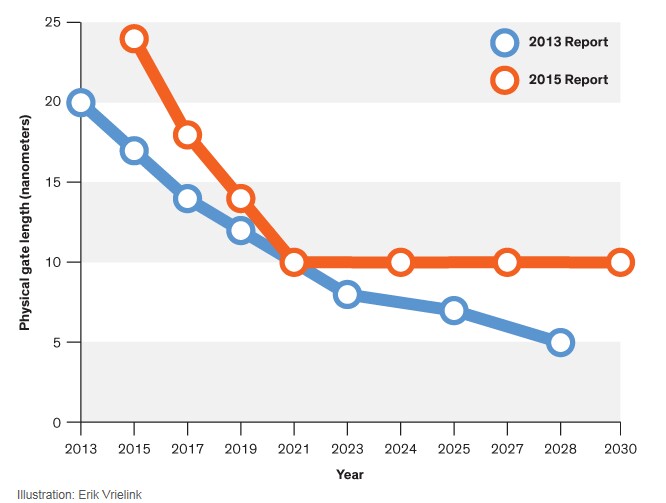 This will be the last ITRS roadmap put together by the Semiconductor Industry Association, which ends a 20+ year effort that began in the US and expanded to include the rest of the world. Citing ‚Äúwaning industry participation‚Äù which was to be expected as one after another major players stopped building fabs for the latest nodes. The technical difficulty and costs associated with leading edge fabs has resulted in significant consolidation as all readers of IFTLE are well aware. Today, there are basically just four major players left: Intel, TSMC, Samsung, and GlobalFoundries.

To some the shocker was probably IBM getting out of semi production. Back in 2009 I gave a presentation to a group of Govt officials who told me not to worry about on shore procurement because ‚ÄúIBM will always be around.‚Äù My response was ‚ÄúNo, that‚Äôs incorrect; they will be out of the IC business soon because a $1B chip fab business cannot support building $5B factories.‚Äù They laughed it off and ignored the comment. I‚Äôm sure they are not laughing now!

Paolo Gargini, chair of the ITRS, astutely commented that chip buyers and designers‚Äîcompanies such as Apple,¬ÝGoogle, and Qualcomm‚Äîare the ones now dictating the requirements for future chip generations, not the IDM‚Äôs that we all grew up with.

IFTLE readers know that this issue has been out there for quite awhile now, for instance at the 2015 IEEE ISSCC (International Solid-State Circuits Conference) Intel detailed results for its future 10nm manufacturing process. They stated that ‚Äú10nm looks like the end of silicon scaling, to achieve 7nm, a III/V material will be required.‚Äù 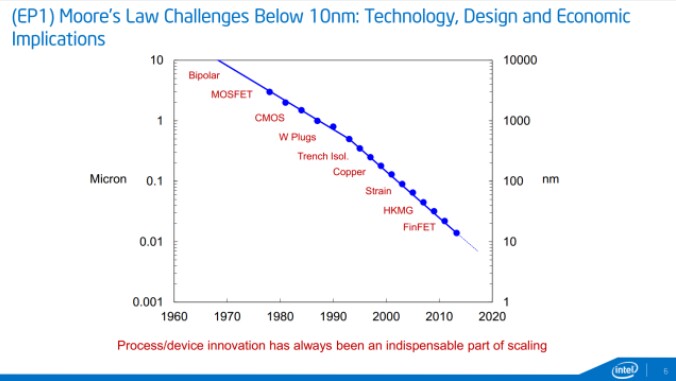 So, where does this leave us?

The ITRS report predicts the industry will move away from FinFET ~ 2019, towards ‚Äúgate-all-around transistor‚Äù technology. A few years later, transistors will use nanowires and become vertical devices. By 2024 they predict we will be facing a thermal limit which will usher in microfluidic channels to increase the effective surface area for heat transfer.

Is this all come to pass? As Yogi Berra used to say ‚ÄúThe hardest things to predict are those that have not happened yet.‚Äù

It is clear that solutions being predicted by the ITRS front end experts are certainly front end solutions. As a reader of IFTLE you know that I have been predicting a period of increased focus in packaging. The heretofore front end equipment companies and IC fabs like TSMC, UMC and Global have certainly bought into this theory as 2.5D, 3D, fan in and fan out have become their new buzz words.

So this explains why the REM song fits how I feel now. It may be the end of the world as we have known it‚Ä¶but I feel fine because packaging is now, assuming it‚Äôs new position on the forefront or microelectronics. Now that manpower and emphasis have shifted to packaging solutions to customize products, I think we have only seen the tip of the iceberg in terms of technological innovation.

This is IFTLE 300, which means I have been sharing information and thoughts with you for 6 years. Thank you all for your continuing support of this blog.

Now, taking this opportunity to update a few things:

For those long time readers of IFTLE still interested in my Lester the lightbulb ‚Äúnon scientific‚Äù lifetime testing [link] here is where we stand, exactly 5 years (Aug 2011) into our test.

Our LED bulb is still burning, but so is our 25 cent ‚ÄúLester the lightbulb‚Äù incandescent bulb. Yes that is correct, the incandescent is still functioning after 5 years with approx. the same burn time and on/off cycling in the same area of the house. The big looser in all this is the compact florescent (CFL) which has burned out 3 times, that‚Äôs right this mercury containing technology (how can anyone call this green ?) is now on bulb #4. A pic of the bulb #3 burnout is shown below. It gave off a puff of white smoke that probably shortened my life due to mercury vapor inhalation. Lucky it didn‚Äôt start a fire. 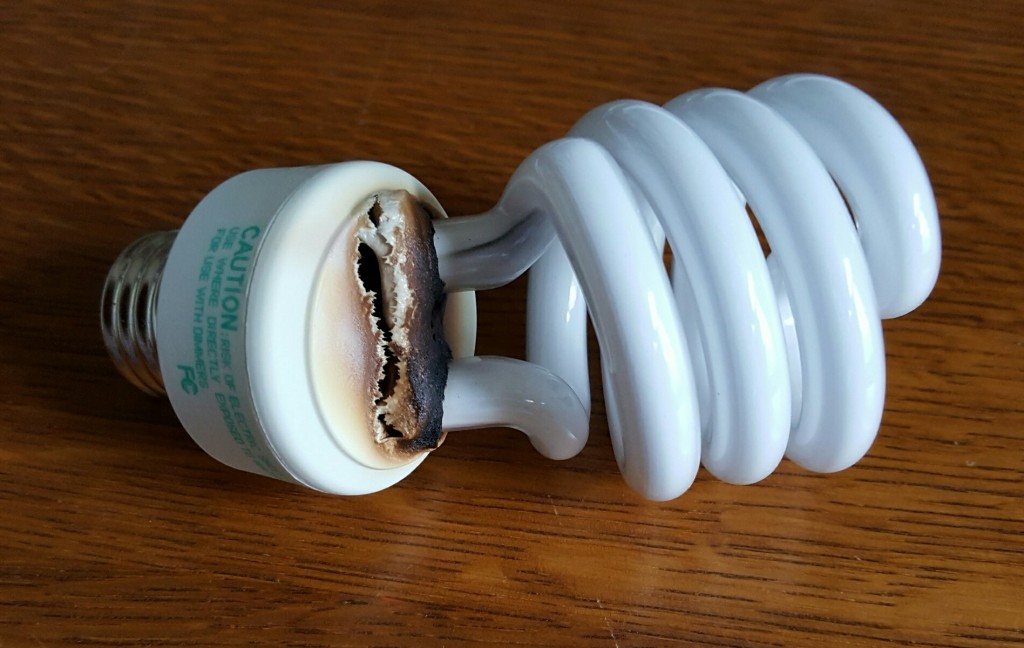 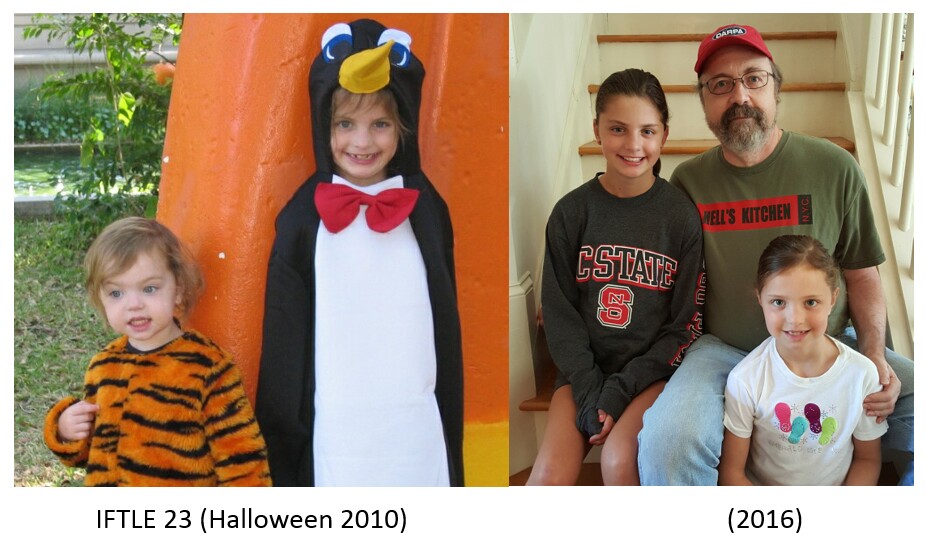 Since its inception ‚ÄúInsights from the leading Edge‚Äù has intentionally put a lot of emphasis on 2.5 / 3D. It has been obvious that if this technology were to take root, it would be a paradigm shift in how we do packaging. IFTLE felt the community needed constant updates on were things stood. More than a decade has now gone by since the first articles appeared proposing we mainstream 3DIC with TSV. The first real products have now appeared in FPGAs, CMOS image sensors and stacked memory. It has clearly become one of the arrows in the packaging quiver. Will prices come down and its applications proliferate? Only time will tell.

Starting with IFTLE 301, my tag line will simply become ‚ÄúFor all the latest in advanced IC packaging, stay linked to IFTLE.‚Äù IFTLE will certainly still cover advances in 2.5 / 3D although not with the special emphasis placed on these topics in the past.

How everyone has enjoyed their summer, I need to go off now and decide on content for IFTLE 301.