The European SEMI AwardÂ was established in 1989 to recognize individuals and teams who have made a significant contribution to the European semiconductor and related industries. At the SEMI ISS meeting (Industry Strategy Symposium) in Munich, SEMI announced the recipients of the European SEMI Award for 2017. Winners were nominated and selected by peers within the international semiconductor community in recognition of outstanding contributions in the field of 3D Integration.

A recent EEE Times article took a look the increase in activity that they have seen from â€śpatent licensing companiesâ€ť[link], aka trolls.

JC Eloy of Yole Developpement offered that chip vendors have become more vulnerable in recent years because M&A in the semiconductor market, has put many patents is up for sale.

For those of you around the world that donâ€™t understand what this is about, I thought Iâ€™d add some background to the EE Times discussion. As the Yole figure below shows these are companies that neither make nor markets products. They derive income by licensing patents to / litigating against companies suspected of infringing said patent(s). 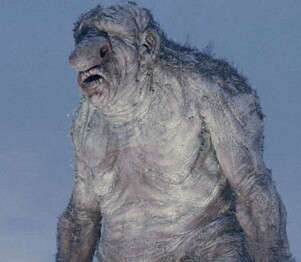 From the work that IFTLE has done for legal firms as an expert witness, I have learned that the legal term for such firms is â€śnon-practicing entityâ€ť or simply NPE. The slang term used in the industry for such entities is â€śpatent trollsâ€ť which is not meant in any way to be complimentary. Iâ€™m not talking the Dreamworks cartoon for kids here, Iâ€™m talking old school trolls (â€¦the Norse nouns troll and trĂ¶ll â€¦mean fiend, demon or werewolf â€“ Wikapedia).

Now trolling in the English language especially modern day slang has many meanings (none of them positive) like internet trolls, but for our discussion here Patent Troll is a term applied to a person or company who attempts to enforce patent rights, against accused infringers, far beyond the patentâ€™s contribution to the prior art, often through borderline illegal, legal tacticsâ€ť. I hope this definition is polite enough for any trolls out there reading this.

Their standard MO (modus operandi) is to buy up patents with some lifetime left on them at depressed prices. Then, their hoard of lawyers are unleashed on companies that are thought to, or hoped to be, or in most cases just hoped to be fearful of the costs of fending off the accusations of being in violation of said patents. Some of them may have R&D operations which help them determine where to focus and others are simply offices full of lawyers and their helpers.

The MO (modus operandi) of the patent troll is to throw a wide net filing lawsuits against a large group of similar companies and then focusing on what is considered to be the weakest one. Getting them to â€śgive upâ€ť and pay what might be an initially low fee, to avoid court costs, is key to their ability to intimidate the rest. Once the license precedent is set, the fact that a similar company has licensed the said patent(s), is a strong factor in court cases. After the first company is â€śhookedâ€ť the price for the rest normally goes up substantially.

Yole has identified the most active NPEs in the figure below. Wi-LAN, based in Ottawa, reportedly acquired 2000+ U.S. patents in 2015, mainly from Infineon/Qimonda and Freescale. In 2016, Wi-LAN initiated 17 lawsuits. 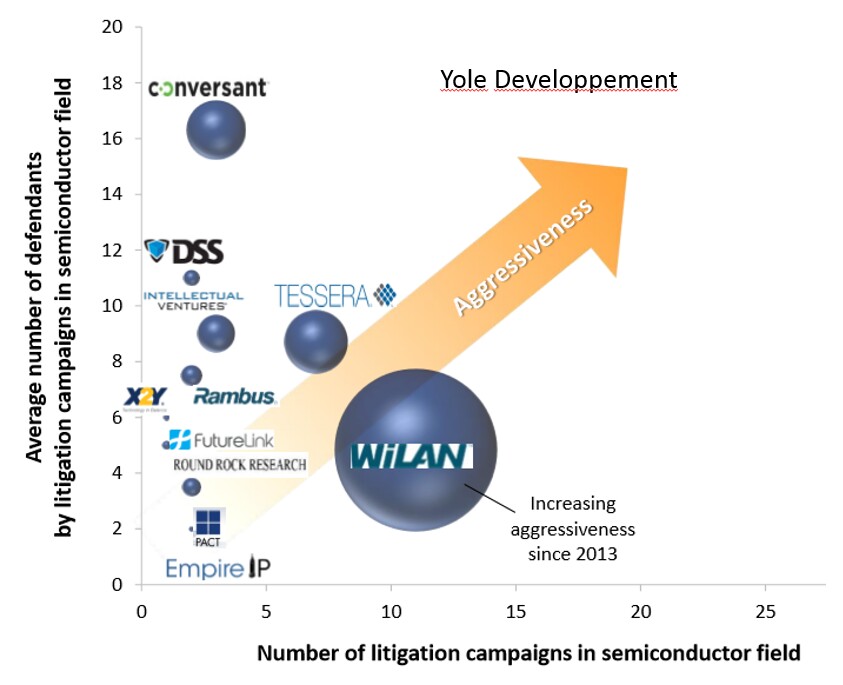 In the EE Times article, Mike McLean of TechInisghtsâ€™ offered the following suggestion for dealing with NPEâ€™s, â€śTo deal with NPEâ€™s, operators need to either take patents off the market before [NPEs] get them in their hands, or need to be able to effectively challenge patent validity.â€ś Helping deliver the latter has provided a steady income stream for IFTLE over the last decade.

At the recent Intel â€śTechnology and Manufacturing dayâ€ť in SF, Intel Sr. Fellow Mark Bohr again pushed for their EMIB technology [see IFTLE 324 â€śIntel EMIB Implementation in the Stratix MXâ€ť] as the best solution for heterogeneous integration. â€śHeterogeneous Integration â€¦… This is where you can not only combine two similar die in a package, but in some cases two very dis- similar dieâ€¦.Heterogeneous Integration will be a bigger part of our futureâ€¦” 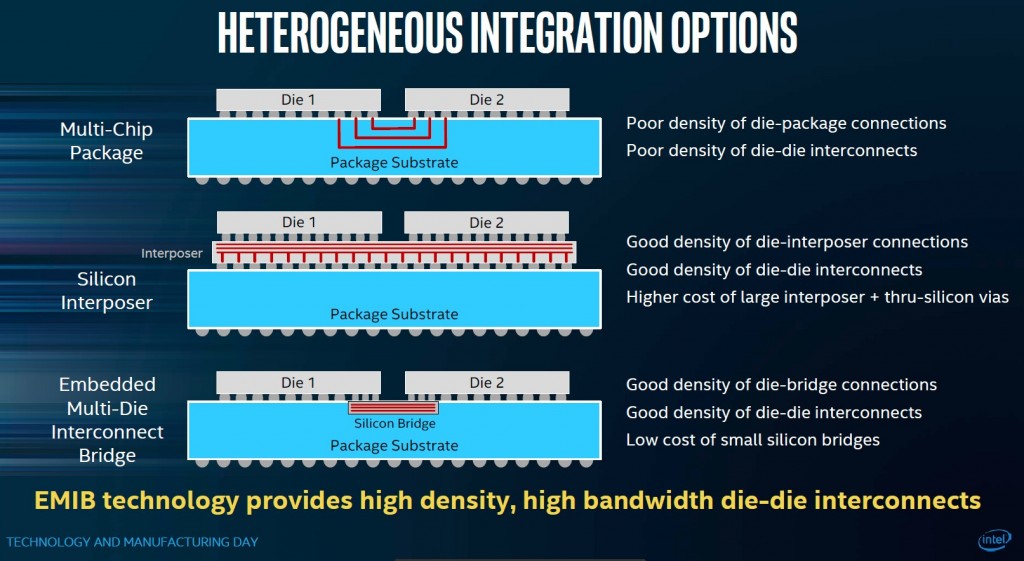 In the expanded view and cross section shown below we see the tighter pitch peripheral IO connection to the silicon EMIB bridge. Bohr contends that EMIB solution is cheaper because it does not contain TSV, through silicon vias.

Bohr notes that this is not just a packaging technology since the chips must be custom designed to be used with the EMIB bridge technology. To IFTLE this is a very important limiting factor that I have not seen discussed previously. 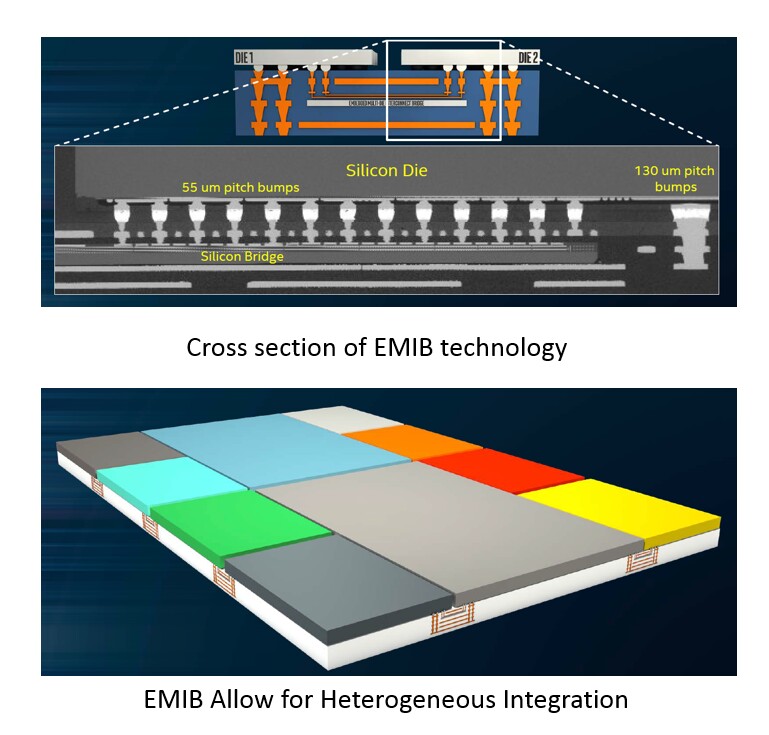