IC insights has announced that if memory market prices continue to hold through 2Q17 Samsung could displace Intel, which has held the #1 semiconductor sales ranking since 1993.

â€śUsing the mid range sales guidance set by Intel for 2Q17, and a modest, yet typical, 2Q sales increase of 7.5% for Samsung, the South Korean supplier would unseat Intel as the worldâ€™s leading semiconductor supplier in 2Q17 (see below). [link] 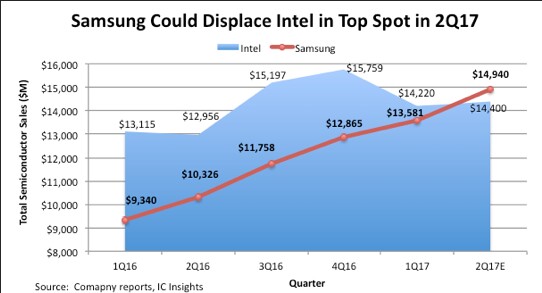 As we have discussed in IFTLE 332 â€śWither Goest the Toshiba NAND Business…â€ť Toshiba is in the process of selling off their memory business to raise cash. At that point all 6 of the 1993 top 10 semiconductor suppliers from Japan will be out of the top 10. 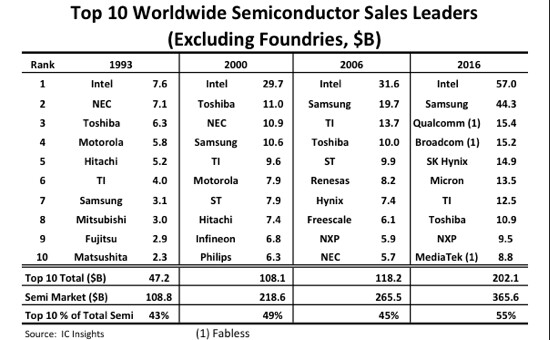 IFTLE has commented many times over the past 5 years that if Samsung ever focused on a foundry business they would immediately become the #2 foundry supplier and could soon compete with TSMC for the number one spot.

If Samsung really wants to run this is a seperate entity and compete head on with TSMC, IFTLE recommends they take their packaging capabilities withthem to the foundry because thatâ€™s the only way to compete with CoWoS and InFO etc.

Samsung reported that they have taped out their 14nm Network Processor close collaboration with eSilicon and Rambus [link]. This is based on Samsungâ€™s 14LPP (Low-Power Plus) 3D FinFET process eSiliconâ€™s ASIC and 2.5D design capability and IP solutions, and Rambusâ€™ 28G SerDes solution.

Samsung announced that they will â€śâ€¦keep developing (our) network foundry solution to be a â€¦.total network solution provider aligned with (our) process roadmap from 14nm to 10nm to 7nm.â€ť

On the packaging front, they report that they have named their newly developed full 2.5D turnkey solution, which connects a logic chip and HBM2 memory on an interposer, as I-CubeTM (Interposer-Cube) solution. This 14LPP network process chip is the first product that Samsung applied I-CubeTM solution together with Samsungâ€™s HBM2 memory. The I-CubeTM solution will be essential to network applications for high-speed signaling, and it is expected to be adopted into other applications such as computing, server and AI in the near future.

HBM2 Interposer with Silicon or Laminate?

At the Hot Chips conference late last summer Samsung in a proposal for low-cost HBM, Samsung outlined plans to lower the complexity and thus cost of HBM technology.

The savings will come from solutions to the listed challenges.

– fewer TSV will make the stacks easier to manufacture and interconnect

– removing the buffer die will make the stack simpler, but the buffer die customization was one of the original tenants for the memory stacking concept so this is confusing.

– moving from a silicon to a laminate interposer on first glance should reduce costs, and the rest of the industry has certainly listed this as an option, but it is still unclear the impact this will have on performance. 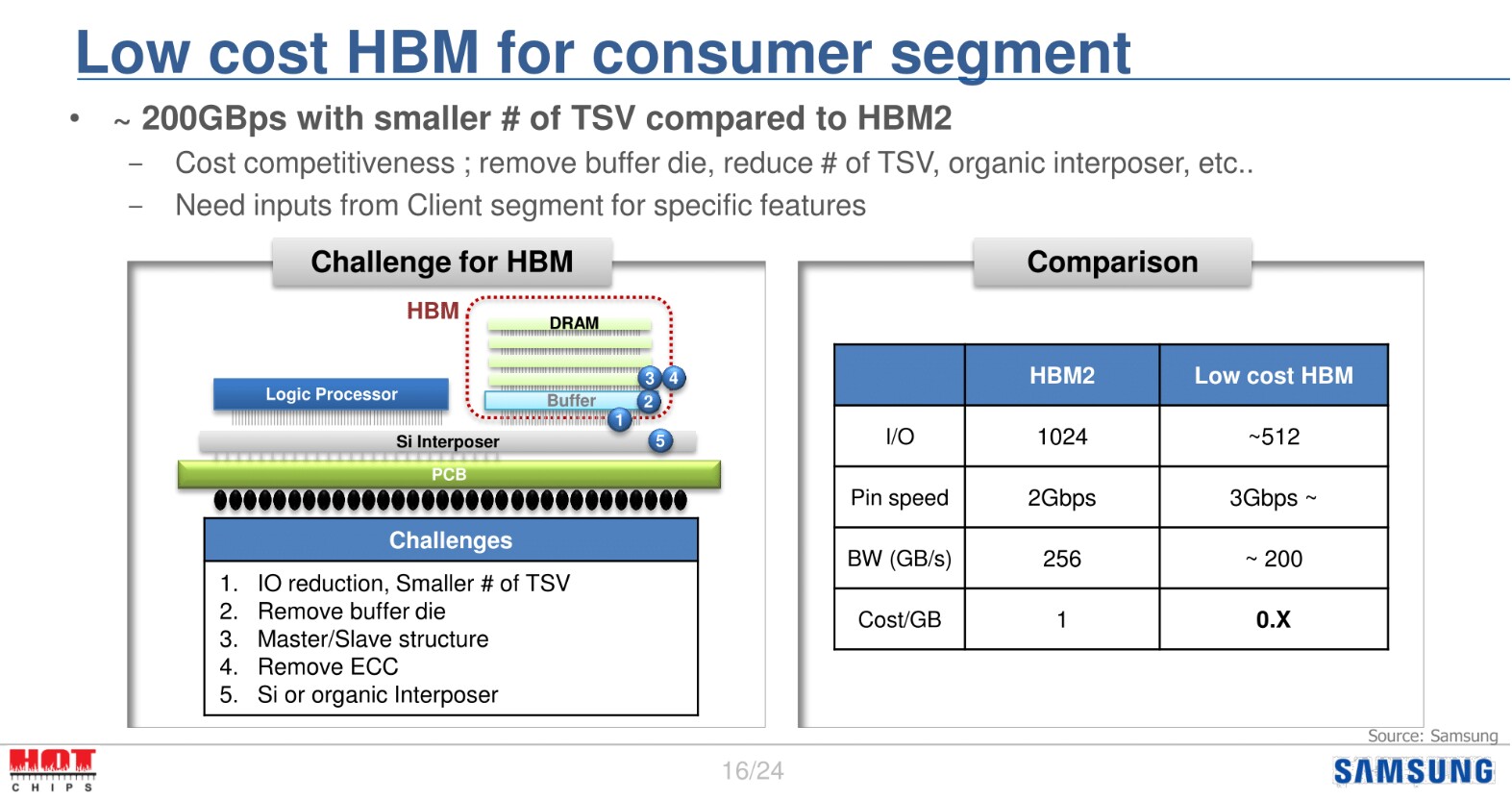