Continuing our look at the 2017 ECTC.

Kino and coworkers at Tohoku Univ presented their data on the ‚ÄúRemarkable suppression of local stress in 3DIC by MnN based filler with large negative CTE‚Äù. 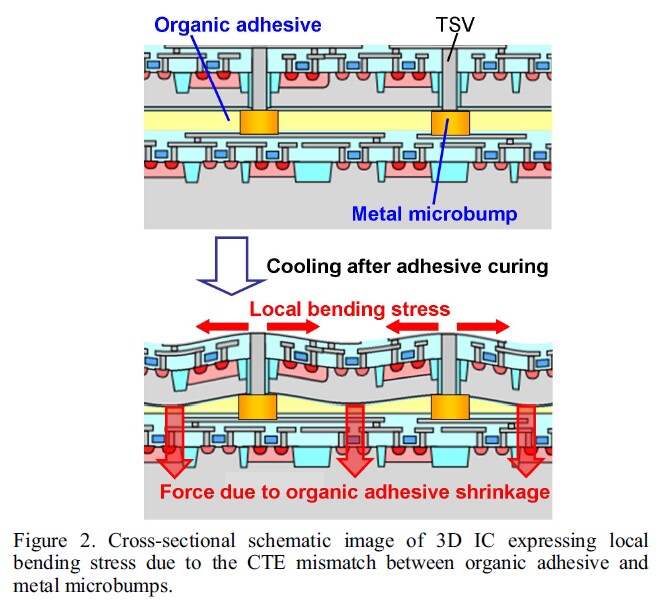 In general, silica, is usually used in underfill material to reduce the CTE of underfill material. A high concentration of filler is required to reduce CTE as low as metal microbumps. However, it is difficult to use the conventional filler for 3D IC with fine pitch microbumps since a high concentration of filler in underfill material increases the viscosity. They propose to use negative-CTE material as the underfill filler to suppress the local bending stress. They used manganese nitride-based material which has large negative-CTE of -45 ppm/K at the temperature from 65 to 100¬∞C. Results indicate that negative-CTE filler can suppress the thinned Si chip bending more than 50% compared with SiO2 filler.¬Ý

WLP is well suited to mobile devices which require small, thin and light bodies. Fan in WLP (FIWLP) is fabricated by building up redistribution dielectric and metal layer on device wafer and attaching ball, and then it is diced to singulated packages. Device semiconductor die sides are exposed in such a FIWLP. The FIWLP fabrication process needs a wide die gap between die for molding compound and to dice, while leaving the molding compound on the die side wall for the protection.

To get the greater productivity and enhance the usage of the device area in the wafer, an expandable film and a novel process have been developedas shown below in fig 2. The film / process can also be applied to a die first type FO-WLP fabrication. Elimination of the die re-placement step can make the FO-WLP fabrication process simpler and less costly. 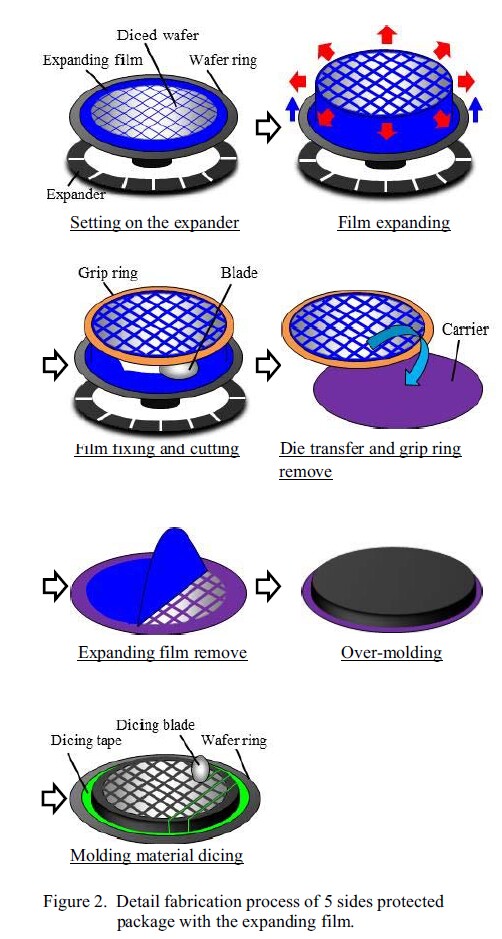 The 5 sides protection fabrication process is composed of 7 steps as illustrated in Fig. 2. The

expanding film with diced-wafer was put on the expander and the film expanded. After that the film is fixed to the grip ring , the film is cut out along the outer rim of the ring. After the singulated dice were transferred to the carrier with keeping the expanded die gap, the grip ring was removed. Then the expanding film was removed from the carrier. After over-molding, the molded wafer was singulated by dicing and 5 side protected packages were obtained.

They propose to use a bilayer test structure with silicon wafer and epoxy molding compound as a standardized evaluation vehicle. Each layer is 300 Œºm thick. To further standardize testing, the molding conditions are fixed at 135 ¬∞C x 600 sec with a post mold cure of 150¬∞C x 2 hrs. By standardizing the test vehicle and processing conditions, warpage behavior between mold compounds¬Ýcan be directly compared, and any observed differences are solely caused by the EMC.