IMAPS (the Int Microelectronics Assembly and Packaging Society) 2017 was held this year near their Research Triangle Park headquarters, in Raleigh, NC, certainly a convenient location for IFTLE. Having started operations in 1967 as ISHM (Int Society for Hybrid Microelectronics), they changed their name and focus during my Presidential year of 1998 to IMAPS. This is the 50th year of existence for this nonprofit society. I emphasize the term nonprofit intentionally. This is important to me since the conferences we all attend request we give our free time to serve as presenters or session chairs or organizers and I want to be sure that the profits from such enterprises are going to a nonprofit and not into someoneâ€™s personal bank account, as is the case for so many of these conferences you and I attend. Basically, I donâ€™t work for free unless it is a non profit, only seems right to me, so conferences that I give my limited time to, tend to be organized by IEEE and IMAPS.

My first IMAPS conference was in 1985 as my professional focus in Dow Chemical shifted from R&D on organometallic catalysts to the electronics industry. I was 35 but only a rookie in the electronics industry with lots to learn. This was the first electronics conference of my career (which I then followed up with the ECTC conference in the spring of 1986) and as importantly, it introduced me to many of the contacts and long term friends that I was able to develop in this industry through the years. 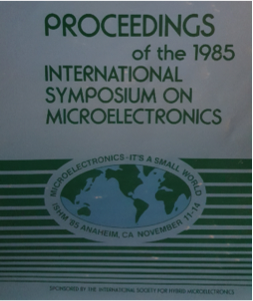 I recently took a look at the Proceedings (which I still have in my professional library) and during this trip down memory lane thought you might be interested in what was considered groundbreaking 32 years ago.

In the mid 1980s the industry was just getting comfortable with surface mount components and Harry Charles of Johns Hopkins was talking about â€śDesign Optimization and Reliability Testing of Surface Mount Solder Jointsâ€ť.

In the computer aided design session authors from Tektronix were sharing their thoughts on â€śJust-in-time Manufacturing â€“ An essential technique for Process Controlâ€ť.

In the Polymer Applications session, Englehard (thatâ€™s right Englehard the precious metals company) was showing us how to spin coat polyimide in their paper â€śMulti-layering with PI dielectric and metallo-organic conductors.â€ť This paper had a significant influence on my personal career since, working for Dow Chemical at the time, I went back home wondering whether I could find a Dow polymer material that could be used for similar thin film polymer IC applications. This eventually led me to the discovery (it existed in the bowels of Dow R&D without a clear application need) and commercialization of BCB dielectric which by the mid 190s led to the commercialization of low cost bumping and WLP at FCT and Unitive and subsequently all the key bumping houses in Taiwan as they licensed the technology. By the early 2000s, BCB was being used in components put into nearly every cell phone being manufactured in the world!

The interconnect technologies session contained the paper â€śRecent advances in Die Attach Adhesives for Microelectronicsâ€ť given by epoxy legend Dick Estes from Epoxy Tech. At the time polymeric die attach were not allowed in high rel military applications. He described the issues of thermal stability, outgassing and most importantly halide contamination of devices.

Kohji Nihei of Oki , later to become infamous as the photographer of the generation that proceeded me, gave the first paper I had ever seen describing the use of â€śLEDs for the electrographic, non impact printing of text and imagesâ€ť entitled â€śDevelopment of High Quality LED Print Headâ€ť (shown below) Think thatâ€™s a technology with a commercial future? 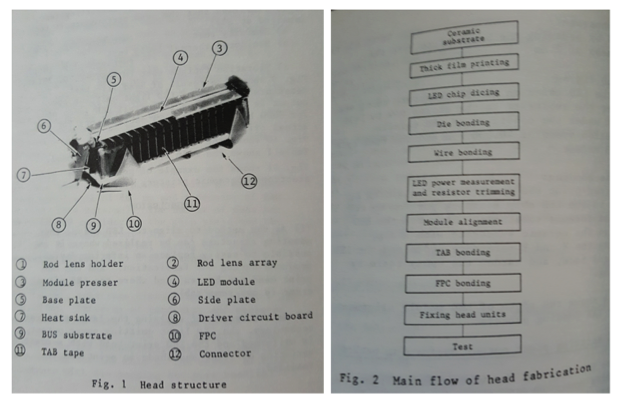 For those of you that donâ€™t remember Kohji, you should, both as a wonderful person and a technologist. Below he is shown a few years later in Japan with the American contingent at an IEEE VLSI workshop. 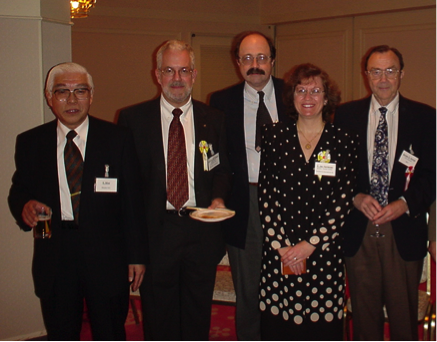 Thatâ€™s enough of the past. Next week, we will begin our look at the 2017 IMAPS Conference content, I promise.

For all the latest on advanced packaging and nostalgia, stay linked to IFTLEâ€¦