First introduced in June 2016, the Samsung HBM2 consists of eight 8Gb HBM2 dies and a buffer die at the bottom of the stack, vertically interconnected by TSVs and ¬µbumps. With each die containing over 5,000 TSVs, a single Samsung 8GB HBM2 package has over 40,000 TSVs. Including spares TSVs ensures high performance, by enabling data paths to be switched to different TSVs when a delay in data transmission occurs. The HBM2 is also designed to prevent overheating beyond certain temperature to guarantee high reliability. The HBM2 reports a 256GB/s data transmission bandwidth, offering more than an 8X increase over a 32GB/s GDDR5 DRAM chip. With capacity double that of 4GB HBM2, the 8GB solution contributes greatly to improving system performance and energy efficiency, offering ideal upgrades to data-intensive, high-end computing (HPC) applications that deal with machine learning and graphics processing .

Last week Samsung announced that it has started mass production of its 2nd-generation 8-gigabyte (GB) High Bandwidth Memory-2 (HBM2) with the fastest data transmission speed on the market today.[link] Dubbed ‚ÄúAquabolt‚Äù, it is claimed to be the industry‚Äôs first HBM2 to deliver a 2.4 gigabits-per-second (Gbps) data transfer speed per pin, at 1.2V for the supercomputing and the graphics card market.

In addition, Samsung increased the number of thermal bumps between the HBM2 dies, enabling better thermal control in each package. The new HBM2 also includes an additional protective layer at the bottom, which increases the package‚Äôs overall physical strength.

Continuing our look at the presentations at the 14 3D ASIP Conference.

Matt Lueck of Micross gave a presentation on their Ultra fine pith interconnect technologies that are being used in their Northrup Grumman (NGC) DARPA CHIPS program discussed in IFTLE 367 [link].

Fine pitch (< 80 um), Cu pillar thermo-compression bonding (TCB) has been widely adopted for advanced packaging of stacked memory and many other applications. Major foundries and assembly houses are offering Cu pillar down to 30 ‚Äì 50¬µm pitch with 20 ‚Äì 30¬µm pitch in development. Availability of fine pitch Cu pillar bumping from foundries and OSATs are limited to high volume customers and off-shore processing.

Micross has been developing fine pitch technologies over the years under their previous ownership ( Microelectronic Consortium of NC (MCNC) and Research Triangle Institute (RTI). They re positioning themselves as a source for prototype and small volume production of such ultra high pitch interconnect.

They have used 10¬µm pitch Cu/Sn ‚Äì Cu bonding in multiple programs since 2007 such as large area array detector applications. They report that such interconnect have shown proven reliability, even for heterogeneous integration with CTE mismatch issues. 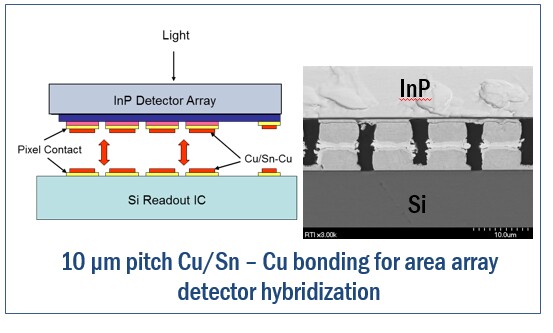 (1) Wafer foil peel force depends on the foil type and the peel speed as shown in table below. 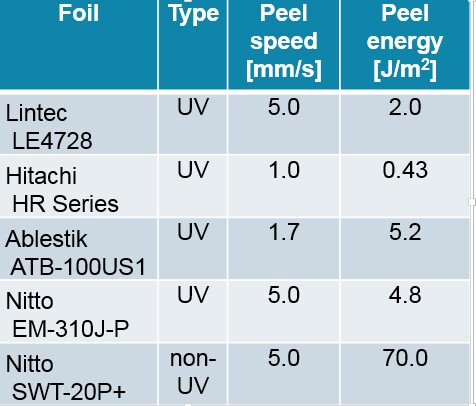 (4) die strength appears (measured by 3 point bending test) is almost independent of thickness but is dependent on :