There were many things that impressed me from hosting the second MEMS Executive Congress Europe – and it wasn’t the cold and snow (though it was chilly!). What struck me the most was how lively, engaged and intelligent the conversations were, not amongst the panelists but between the audience and the panelists. Often, Europeans can be conservative and reserved in conferences, but not this year In fact my favorite quote from one of the panelists was: "when I agreed to this join this panel I didn’t know I would be joining a religious war." 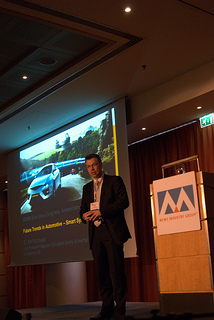 The morning definitely didn’t start off with an aggressive tone as the elegant Ralf Schnupp, Vice President Segment Occupant Safety & Inertial Sensors, Continental served as our keynote. He focused his discussion on future trends in automotive with an overview of the megatrends affecting: safe mobility, clean power, intelligent driving, global mobility and most importantly, safety, with a goal of zero fatalities and accidents (WOW). He spoke of the challenges of complex sensor systems as well as the requirements of such systems. What stuck with me was his statement that "we don’t need more sensors, we need more robust, secure and safe MEMS/sensors." For sensors I think he’s onto something (because it’s about the smart sensor integration and the software); although when I tried out that theory later that week at our sister-conference, Smart Systems Integration, I was completely shot down (ha!). 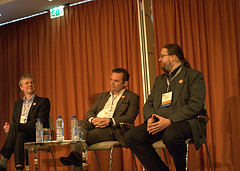 After Schnupp’s keynote came the consumer panel moderated very capably by Dave Thomas, Marketing Director, Etch Products, SPTS Technologies. Panelists included: Paul Buijs, General Manager, Bruco Integrated Circuits bv; Robin Heydon, Global Standards – Research and Innovation Group, CSR; and Joel Huloux, Director – Standardization and Industry Alliances, STMicroelectronics. You can probably tell from two of the four titles that the panel talked A LOT about standardization. And, yes, that was by design, as it’s an important topic that the MEMS industry has been working on and partnering with groups like MIPI Alliance (which Joel chairs).

Joel brought a good perspective to the panel because he’s not a MEMS guy; he’s really an OEM/end-user that having spent over a decade with handset company Erikson (I want to say 20 years but don’t quote me) and is now with ST, because of the ST/Erickson joint venture. He said that MIPI aims to create specifications for mobile interfaces and recently became interested in MEMS (and joined an important partnership with MEMS Industry Group) because mobile devices add at least two new MEMS each year. True, but the question remains, what are you going to standardize? And with that question, thus opened a little bit of the holy war amongst the panel and the audience. Clearly it’s an important hot button issue.

When asked about the future of consumer electronics, the panelists all felt that its market strength would continue. Robin felt the most important impact on the world would be the Internet of things as well antenna switching (he does work for CSR after all). He also felt that the next move would be towards peripherals such as the smart watch – while Paul envisioned a future where we’d all have a “doctor in a watch” as the next killer app, enabled by MEMS. 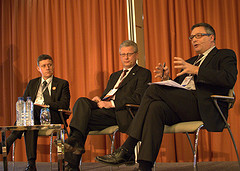 Next up was the automotive panel moderated ably by Marc Osajda, Director, Pressure Sensor Business Unit, Freescale Semiconductor – Germany. With panelists: Frédéric Breussin, Business Unit Manager, MEMS & Sensors, Yole Développement; Pietro Perlo, Vice President Torino E-District, Interactive Fully Electrical Vehicles; and Jan Peter Stadler, Senior Vice President of Engineering Sensors, Automotive Electronics Division, Robert Bosch GmbH. What surprised me about this panel is how quickly the panelists started talking about electric bicycles (e-bikes). I actually had to check with Ralph Schnupp, who was sitting next to me, to confirm that was indeed what Pietro had started the panelists discussing.

Marc quickly moved them back to automotive and it was actually quite comical to watch – Pietro and Jan Peter were sort of like the odd couple – both representing opposite sides of the spectrum of automotive. While Pietro focused on totally electric vehicles (including bikes!), Jan Peter averred that the automobile would evolve, but even by 2020 the majority of cars will still be run by combustible engines. Frédéric was well placed as a market analyst to give perspective on current uses of MEMS and sensors in applications such as night vision, heads up displays as well as efforts to reduce emissions, increase comfort and increase safety. What was also clear from all the panelists was that the consumer world is driving more and more of the automotive world; which is good for technology, but bad for pricing.

The best part of the panel was when Marc asked each panelist to describe what his car would look like in 2025. Frédéric said he’d finally give in and buy a hybrid, Jan-Peter said he wasn’t sure what kind of engine but he’d definitely want a car big enough to hold the wine he’d drive back from Romania and carry his e-bike to all the places he likes to use them (in the mountains). Lastly, Pietro stole the show when he said he’d be using a flying an electro-mobility flying car: this is a possibility because we are MEMS!"

I’ll leave you hanging there, wanting to hear more of the excitement and challenging conversations at MEMS Executive Congress Europe 2013. A teaser: The next panel was MEMS in Energy, which discussed energy harvesting MEMS in depth, and as you can imagine, the opinions varied widely, to put it mildly. Soon, I’ll also describe to you the MEMS in Medical, focused on Aging panel which challenged us all to think more about quality of life issues and what more we can do with MEMS to enable a better world. So stay tuned, I’ll post my next blog soon.