By now, you have seen the news that ASE has made an offer to buy up to 25% of the shares of competitor SPIL at a 34% premium. [link]

For those of you following IFTLE, this attempt at further industry consolidation should not come s a surprise [see IFTLE 163, 195, 231, 241], although some would have predicted that offers for the big 4 OSATS would come from foundries or China Inc, not fellow OSATS.

Although ASE is making statements like āā¦this is not a hostile takeover” , āā¦ASE is seeking cooperation rather than competitionā, and that this āā¦is purely a financial investment, and ASE will not intervene in SPILās operationsā this is the kind of move that clearly precedes a takeover attempt.

ASE and SPIL currently have 19.1% and 10.1% shares, respectively, in the global IC packaging and testing market. The planned ASE-SPIL integration will widen the market gap against rival companies, including Amkor Technology, which has a 12% share and China-based JCET with a 10% share [link]. JCETās acquisition of STATS ChipPAC was the first major consolidation move amongst the top assembly houses. After acquiring STATS ChipPAC in 2015, JCET now has a production capacity almost equal to SPIL. If this ASE / SPIL goes through, the pressure will on Amkor to make a move beyond J-devices. 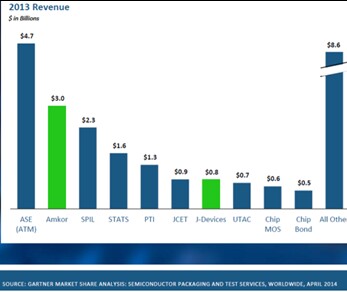 TSMC offered ā no comment ā on the ASE bid offer [link]. ~ 90% of the backend packaging for TSMCās fabless clients is decided by their customers. Although TSMC works with both ASE and SPIL, many customers report that TSMC appears to have a closer relationship to ASE who they use, for instance, to backup to their internal bumping capacity.

With their recent major move into packaging, TSMC is becoming a competitor to both ASE and SPIL and rumors have circulated that TSMC could acquire one of the OSAT assembly houses.

By the end of the week Hon Hai Precision Industry (which some of us remember as Foxcon the board stuffer) and SPIL announced a strategic alliance via a share swap to reject this ASE hostile takeover of SPIL [link].

Despite earlier delays [see IFTLE 228, āSamsung Goings Onā] TSMC, during its Q2 earnings call, announced that the chipmaker has begun volume shipment of chips based on its 16-nm FinFET manufacturing process.

One of their first 16nm development projects has been with HiSilicon, the chip design division of Chinaās telecommunications company Huawei. They have produced an ARM-based 32-core, 64-bit networking processor using TSMC 16nm FinFET manufacturing process. [link].

The 32-core ARM Cortex-A57 processor is aimed at wireless communications and routers and achieves a clock frequency of 2.6-GHz for next-generation base stations, routers and other networking equipment.Ā

Through the last decade TSMC has wisely expanded into packaging, MEMS and LEDs so it was to be expected that they would also try their hand at solar. Well that experiment looks like it is over. TSMC has announced that TSMC Solar, its 100%-owned subsidiary, will cease manufacturing operations at the end of August 2015 as TSMC believes that its solar business is no longer economically viable [link].

TSMC has come to the conclusion that despite what it considers as its world-class conversion efficiency for its CIGS [Copper indium gallium (di)selenide ] technology, TSMC Solar will not be viable even with the most aggressive cost reduction plan.

āDespite six years of hard work we have not found a way to make a sustainable profit,” said Steve Tso, chairman of TSMC Solar and senior VP of TSMC.

For all the latest in 3DIC and other advanced packaging, stay linked to IFTLEā¦