The language of 3DIC is certainly a bit confusing. In the past I have made fun of EE Times reporters confusing BE finfet technology with TSV based 3DIC. [ see IFTLE 62 ‚Äú3D and Interposers ‚Äì Nomenclature confusion; Equipment Market Shift to Pkging Continues‚Äù ].

There is also confusion brewing concerning TSV based 3DIC and what can be called monolithic 3DIC.

Back end (BE) 3DIC with TSV is a parallel process where each layer or stratum is fabricated with TSV separately and subsequently joined. Monolithic 3DIC is a front end (FE), sequential process where a second layer of silicon is deposited or grown onto the first finished chip and the transistor and interconnect processes are repeated.

The issue with the sequential process has always been the temperatures required to deposit or grow a second crystalline layer of silicon on top of the IC. It is difficult to overcome the 400¬∞C process temperature limitation imposed by the use of aluminum and copper IC interconnect¬Ý when creating the second layer of silicon and implanting and annealing the second layer of transistors.

For instance the early work of Akasaka-san at the LSI R and D Labs of Mitsubishi Electric described the basic concept of monolithic 3DIC as shown below. 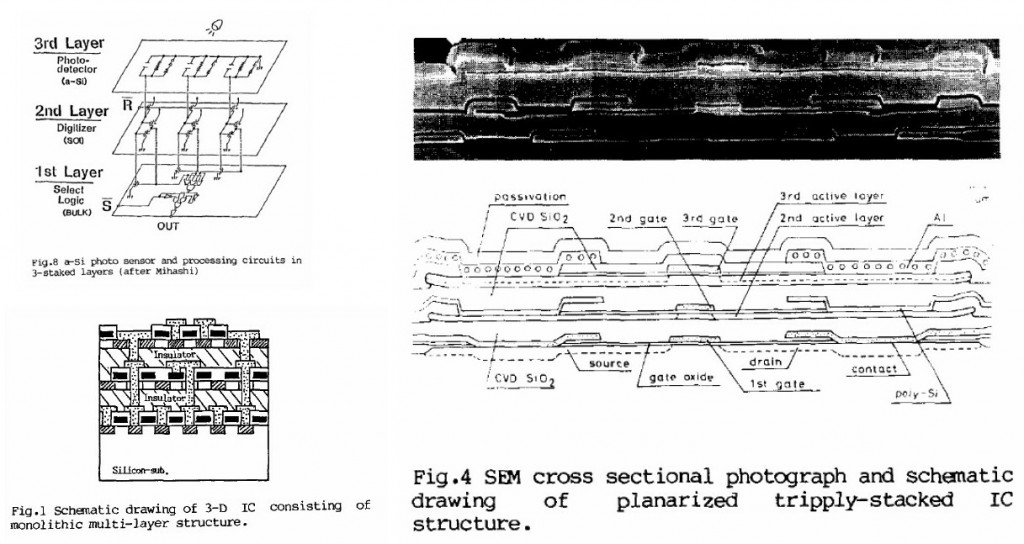 It was clear nearly 30 years ago that ‚Äúto fabricate 3-D IC successfully, a wafer temperature during the crystallization should be kept low enough not to destroy the device or not to change the device performance fabricated in the beneath layer‚Äù. They proposed that the key was to ‚Äúto control the thermal profile in the polysilicon layer‚Äù and Akasaka proposed ‚Äú…a laser or an electron beam recrystallization is thought to be a suitable method due to their effective low process temperature.‚Äù

Certainly laser annealing has come a long way since the first prognostications of Aksaka. 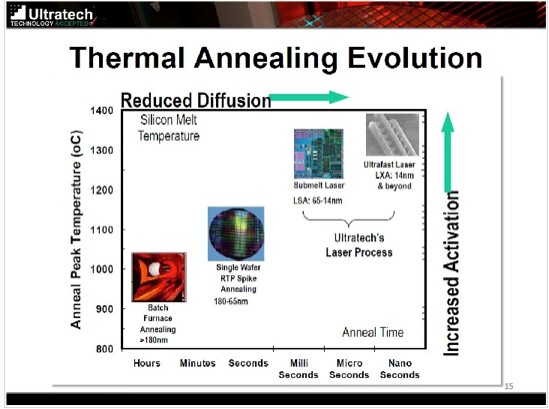 Zvi Or-Bach of Monolithic 3DIC is now proposing the use of smart-cut¬Æ for the formation of the second strata (and not amorphous silicon crystallization) with shielding layers to protect the first strata interconnect, as shown below. 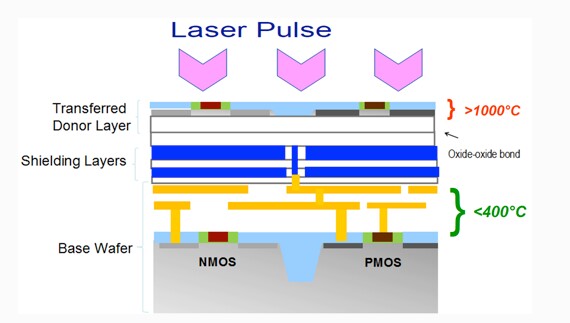 Will these advances allow monolithic 3DIC to compete with TSV based 3DIC ? Some say that sequential 3D technology can be much less complex and expensive to implement,…maybe we will be finding out soon.

[ IFTLE note ‚Äì ‚Äú150 layers is likely the silliest marketing statement¬Ý I have seen since IBM and 3M released the headline claiming ‚Äú3M and IBM today announced that the two companies plan to jointly develop ‚Ä¶. stacked silicon towers‚Ä¶..commercial microprocessors composed of layers of up to 100 separate chips.‚Äù[link]

Consolidation in the microelectronics industry continued in Dec when Merck agreed to buy AZ Electronic Materials SA (AZEM) for $2.6 B [link]. Merck which controls the liquid crystal market for flat panel displays now becomes on the largest photoresist suppliers.

Startup Santa Barbara Materials (SBA Materials) with patented ‚ÄúLiquid Phase Self Assembly‚Äù technology is a nano-‚Äêstructured, advanced siloxane based approach to porous compositions that could have use in electronics, optical and energy storage arenas. IFTLE has been keeping an eye on SBA for several years since they appear to be the only SiO2 dielectric choice for Low K IC chips that can actually deliver on sub 2.5 Dk [ see ‚ÄúLow-k dielectric family introduced by SBA Materials‚Äù and IFTLE 138,¬Ý ‚ÄúFoundry Intel; 300 mm Capacity; SBA Low-K Oxide‚Äù].

SBA has recently closed¬Ý a series B financing round which included Intel Capital as one of the investors. [link] CEO Bill Cook indicates that more will be coming on the strategic investor front ‚Äúsoon.‚Äù

SEMI has announced that Xilinx is a recipient of the 2013 SEMI Award for North America. The development team at Xilinx was recognized for their commercialization of the silicon interposer ‚Äúwhich provides more than two orders of magnitude increase in die-to-die bandwidth per watt. This achievement effectively addressed both challenges of decreasing power and increasing bandwidth for advanced digital ICs. It also decreased latency to only 20 percent for standard input/output connections. Initially announced in 2011 and first shipped in 2012, the incorporation of a silicon interposer, also called 2.5D technology, delivers performance and power requirements dramatically improved compared to standard packaging‚Äù Liam Madden ¬Ýaccepted the award on behalf of the Xilinx which includes Trevor Bauer, Liam Madden, Kumar Nagarajan, Suresh Ramalingam, Steve Trimberger, and Steve Young.

Semi stated that ‚ÄúXilinx use of a silicon interposer in their packaging of advanced FPGA represents a major innovation in assembly and packaging technology and provides a learning curve for the many of the technologies that will be needed for high-volume production of 3D-stacked die‚Ä¶. While the elements of redistribution layers on silicon, TSVs, and microbumps were already available [they had not been combined commercially] to provide this high bandwidth, low power packaging solution.‚Äù