Figure 1 shows that more than half of industry capital spending is forecast for memory productionâ€”primarily DRAM and flash memoryâ€”including upgrades to existing wafer fab lines and brand new manufacturing facilities. Collectively, memory is forecast to account for 53% of semiconductor capital expenditures this year. The share of capital spending for memory devices has increase substantially in six years, nearly doubling from 27% ($14.7 billion) in 2013 to a forecast of 53% ($54.0 billion) of total industry capex in 2018, which amounts to a 2013-2018 CAGR of 30%. 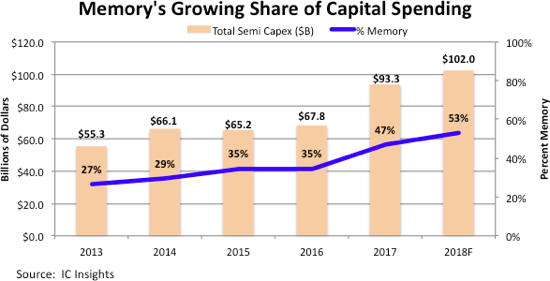 After two years of big increases in capital expenditures, a major question looming is whether high levels of spending will lead to overcapacity and a softening of prices. Â Historical precedent in the memory market shows that too much spending usually leads to overcapacity and subsequent pricing weakness. Â With Samsung, SK Hynix, Micron, Intel, Toshiba/Western Digital/SanDisk, and XMC/Yangtze River Storage Technology all planning to significantly ramp up 3D NAND flash capacity over the next couple of years (and new Chinese memory startup companies entering the market), IC Insights believes that the future risk for overshooting 3D NAND flash market demand is high and growing.