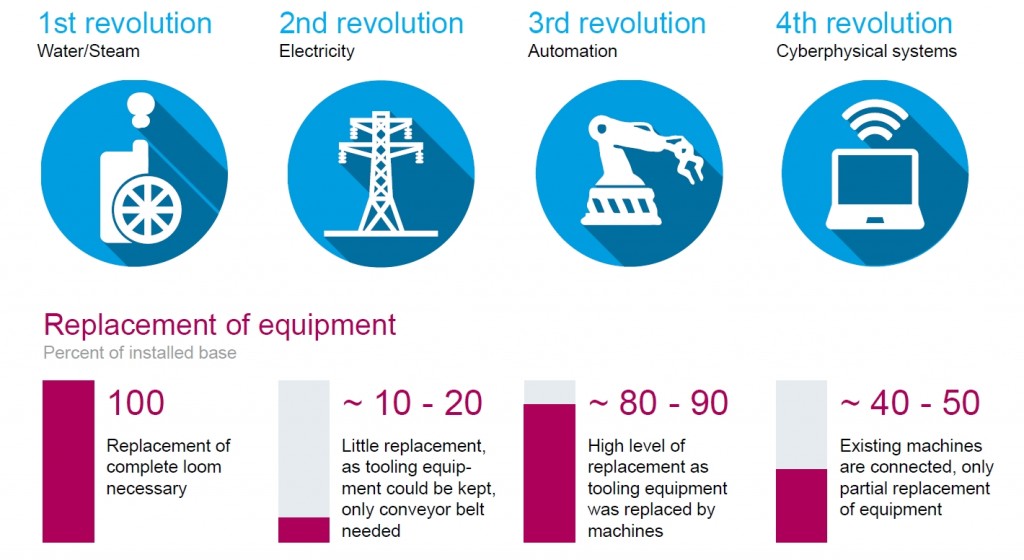 The semiconductor industry is sure to benefit by the “digitization” of manufacturing in that it’s an important component of the IoT explosion, along with smart homes, smart cities, smart health, etc. But is the semiconductor manufacturing industry – already one of the most advanced in the world – ready for the revolution? Will the cobbler’s children get new shoes? I believe it will, but there are some major roadblocks that need to be overcome.

New innovation is required for a couple of reasons. First, the path to continued cost reduction through scaling has come to an end. The industry will continue to push to smaller dimensions and pack more functionality on a single chip because the world will always need super-advanced electronics for data servers, cloud computing and networking. But it’s looking to be an increasingly expensive proposition.

At the same time, the industry is looking to the Internet of Things explosion as the “next big thing.” The two most important aspects of IoT devices will be low power and low cost. Speaking at a press conference at Semicon Europa in October, Rutger Wijburg, Senior VP and General Manager Fab Manufacturing for GlobalFoundries put things in perspective: “The wave of the Internet of Things is building. There will be a massive wave with tens of billions of devices. What is very important for our industry is that the two waves that have been driving our industry for a very long time – computers and mobile – are slowing down.” He noted that the IoT represents massive volume, but it doesn’t need the most advanced technology. “What it needs are two things: low power and low cost,” he said.

Wijburg said a typical figure of merit in the mobile space is $0.25/mm2. “My estimation is that the massive volume going into the Internet of Things has to be delivered for ASPs (average selling price) between $0.05 and $0.10/mm2.

How to bring the cost per square mm of silicon down by at least 5X from where it is today? “One of the things that the industry has done extremely well with is finding new ways of innovation to bring down the cost of the next node. That has actually been driving the Law of Moore for many, many years,” he said. “But at this moment, we are at a point where it doesn’t work anymore,” Wijburg said.

Beyond that, it’s like that some other kind of major innovation will be required to reduce costs. Work is underway to fabricate various kinds of electronics with printing with, for example, roll-to-roll inkjet printing. Indeed, a conference dedicated to printed electronics was co-located with Semicon Europa. But it’s likely that this technology will limited to relatively low-tech and novel devices (i.e., electronic tattoos).

Could the Industry 4.0 movement enable a dramatic reduction in costs? It’s possible, but it will take some time.

In a recent report, McKinsey defines Industry 4.0 as digitization of the manufacturing sector, with embedded sensors in virtually all product components and manufacturing equipment, ubiquitous cyberphysical systems, and analysis of all relevant data. It is driven by four clusters of disruptive technologies. The first consists of data, computational power, and connectivity – low-power, wide-area networks are one example. Analytics and intelligence form the second, while human-machine interaction is the third, comprising, for instance, touch interfaces and augmented reality. Digital-to-physical conversion is the fourth: advanced robotics and 3D printing are two examples.

Proponents of Industry 4.0 say greater connectivity and information sharing — enabled by new capabilities in data analytics, remote monitoring and mobility — will lead to increased efficiency and reduced costs. There will be a paradigm shift from “centralized” to “decentralized” production. There will also be greater efficiency across the supply chain, and more companies involved in the supply chain, providing services such as security. 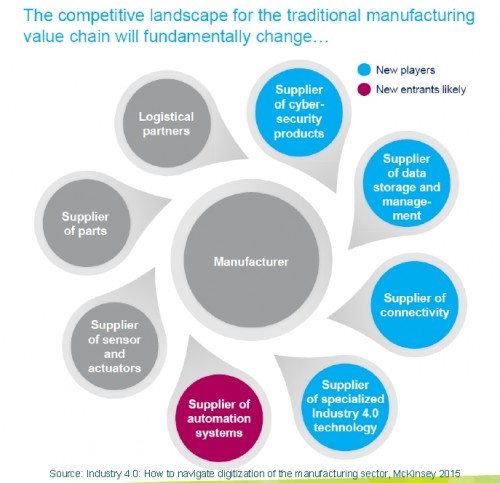 I know what you’re thinking. The semiconductor industry embraced all these things years ago. It’s the poster child for this kind of thing!

Sadly, there’s a long way to go to realize the kind of data sharing and “digitization” embodied in the Industry 4.0 concept. “The set of problems getting to 4.0 is profound,” said Nick Ward, director, marketing service group, Applied Global Services, Applied Materials. Ward, who presented on the topic at Semicon Europa, said data collection is not the issue in that the semiconductor industry has been collecting data for a long time, with a 40% increase node-to-node. “The MES is constantly being asked for more granularity and higher speed,” he said.

The challenge is that the industry has been extremely secretive, to the point where people entering the fab aren’t allowed cell phones with cameras.

Ward said the industry will need to change how it thinks about IP. There needs to be a new data structure that allows it to be shared in some way, with “broad brush” IP treated differently than what’s really important.