IC Insightsâ€™ November Update to the 2018 McClean Report, released later this month, includes a discussion of the forecasted top-25 semiconductor suppliers in 2018 (the top-15 2018 semiconductor suppliers are covered in this research bulletin). Â The Update also includes a detailed five-year forecast of the IC market by product type (including dollar volume, unit shipments, and average selling price).

The expected top-15 worldwide semiconductor (IC and O-S-Dâ€”optoelectronic, sensor, and discrete) sales ranking for 2018 is shown in Figure 1. Â It includes seven suppliers headquartered in the U.S., three in Europe, two each in South Korea and Japan, and one in Taiwan. Â After announcing in early April 2018 that it had successfully moved its headquarters location from Singapore to the U.S., IC Insights now classifies Broadcom as a U.S. company.

In 2Q18, Toshiba completed the $18.0 billion sale of its memory IC business to the Bain Capital-led consortium. Toshiba then repurchased a 40.2% share of the business. Â The Bain consortium goes by the name of BCPE Pangea and the group owns 49.9% of Toshiba Memory Corporation (TMC). Â Hoya Corp. owns the remaining 9.9% of TMCâ€™s shares. Â The new owners have plans for an IPO within three years. Bain has said it plans to support the business in pursing M&A targets, including potentially large deals.

As a result of the sale of Toshibaâ€™s memory business, the 2018 sales results shown in Figure 1 include the combined sales of the remaining semiconductor products at Toshiba (e.g., Discrete devices and System LSIs) and NAND flash sales from Toshiba Memory Corporation.

In total, the top-15 semiconductor companiesâ€™ sales are forecast to jump by 18% in 2018 compared to 2017, two points higher than the expected total worldwide semiconductor industry 2018/2017 increase of 16%. Â The three largest memory suppliersâ€”Samsung, SK Hynix, and Micronâ€”are each forecast to register greater than 25% year-over-year growth in 2018 with SK Hynix expected to log the highest growth among the top 15 companies with a 41% surge in sales this year. Â All of the top-15 companies are expected to have sales of at least $8.0 billion in this year, two companies more than in 2017. Â Nine of the top-15 companies are forecast to register double-digit year-over-year growth in 2018. Â Moreover, five companies are expected to have â‰Ą20% growth, including four of the big memory suppliers (Samsung, SK Hynix, Micron, and Western Digital/SanDisk) as well as Nvidia. 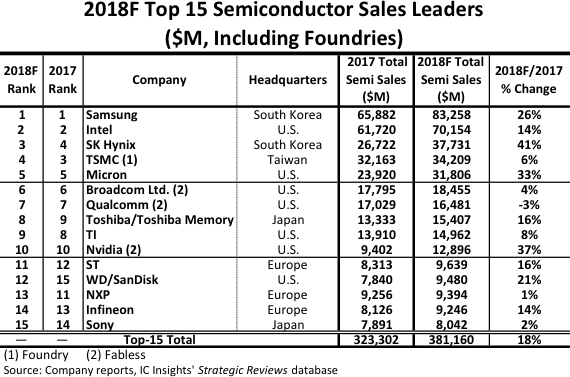 The largest move upward in the ranking is forecast to come from Western Digital/San Disk, which is expected to move up three spots to the 12th position. Â In contrast, NXP is expected to fall two places to 13th with a sales increase of only 1% this year. Â However, the worst-performing company in the ranking is forecast to be Qualcomm with a semiconductor revenue decline of 3% this year, the only top-15 company expected to register a drop in sales.

The top-15 ranking includes one pure-play foundry (TSMC) and three fabless companies. Â If TSMC were excluded from the top-15 ranking, Taiwan-based MediaTek would have been ranked in the 15th position with forecasted 2018 sales of $7.9 billion, up only 1% from 2017.

IC Insights includes foundries in the top-15 semiconductor supplier ranking since it has always viewed the ranking as a top supplier list, not a marketshare ranking, and realizes that in some cases the semiconductor sales are double counted. Â With many of our clients being vendors to the semiconductor industry (supplying equipment, chemicals, gases, etc.), excluding large IC manufacturers like the foundries would leave significant â€śholesâ€ť in the list of top semiconductor suppliers. Â Foundries and fabless companies are identified in the Figure. Â In the April Update to The McClean Report, marketshare rankings of IC suppliers by product type were presented and foundries were excluded from these listings.

Overall, the top-15 list is provided as a guideline to identify which companies are the leading semiconductor suppliers, whether they are IDMs, fabless companies, or foundries.

Unlocking the secrets of metal-insulator transitions