Notes from Day 1 can be found here.

Notes from Day 2 can be found here.

Day 3 was just a morning session, with China being the topic. Sunny Hui, SVP Worldwide Marketing for SMIC, gave (for me) a notable keynote on ‚ÄúCollaborate to Win in the China Market‚Äù.

Sunny started by giving some background to China‚Äôs economic and technological growth; gross domestic product (GDP), for example, has increased by 35x in the last 30 years, to $10.4 trillion, and 40% of worldwide semiconductor shipments go to China (more is spent on semiconductors than on oil!). Depending on the segment, these semiconductors go into the 70 ‚Äì 90% of electronics products that are made in China and exported. And Chinese brands are becoming well known in world markets ‚Äì Huawei, Haier, Lenovo and others are no longer strange names to us in North America and Europe.

Specifically referring to SMIC, we were shown a teardown (something I recognise!) of the Huawei P8 phone, with six parts fabbed by SMIC inside it. 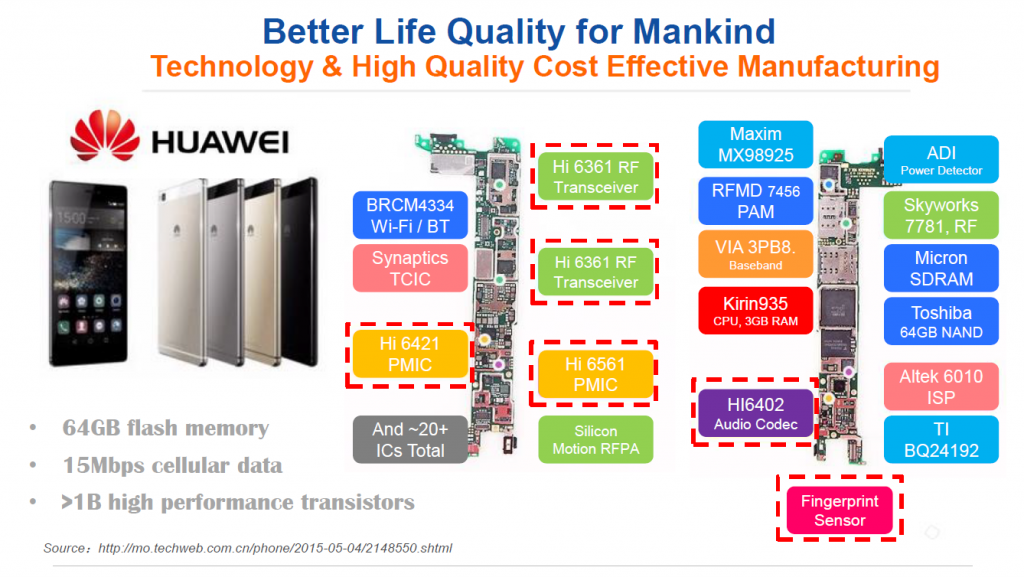 The rise in China (and elsewhere) of ubiquitous big data, driven by cloud usage and IoT, pressures users to choose the right technology node for their chips, which gave Sunny a chance to show the SMIC technology portfolio; 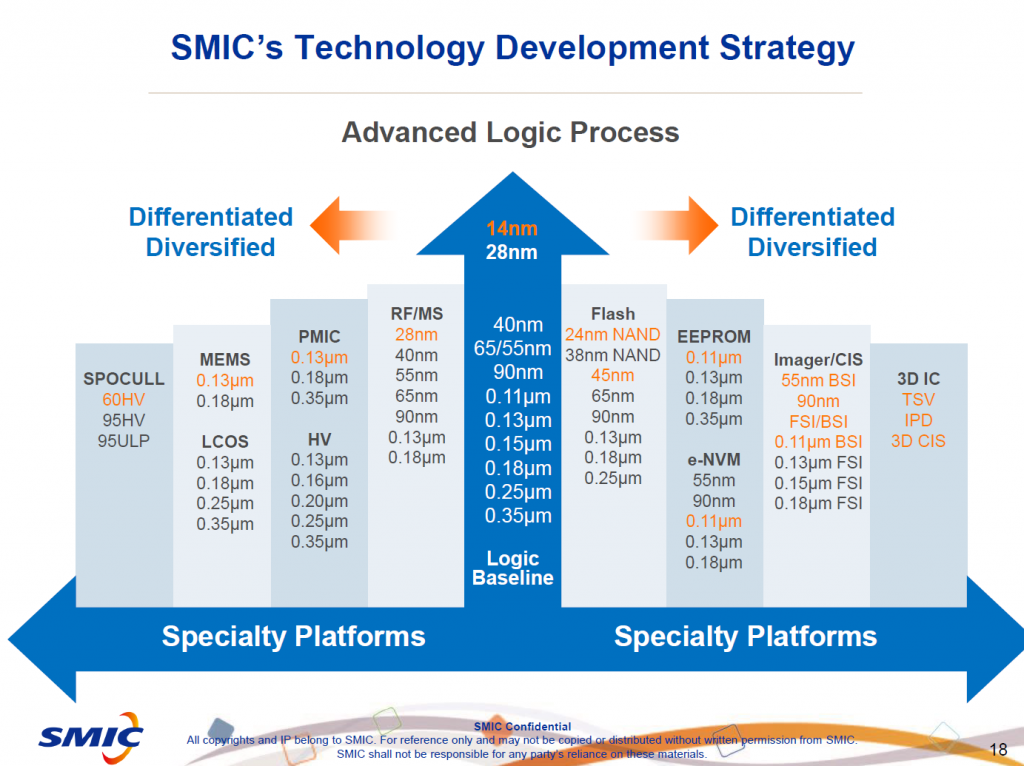 Which looks like a challenging range of processes to me! (SPOCULL = SMIC Poly on Contact Ultra Low Leakage.) We were also shown some SMIC finFETs, the first that I have seen. 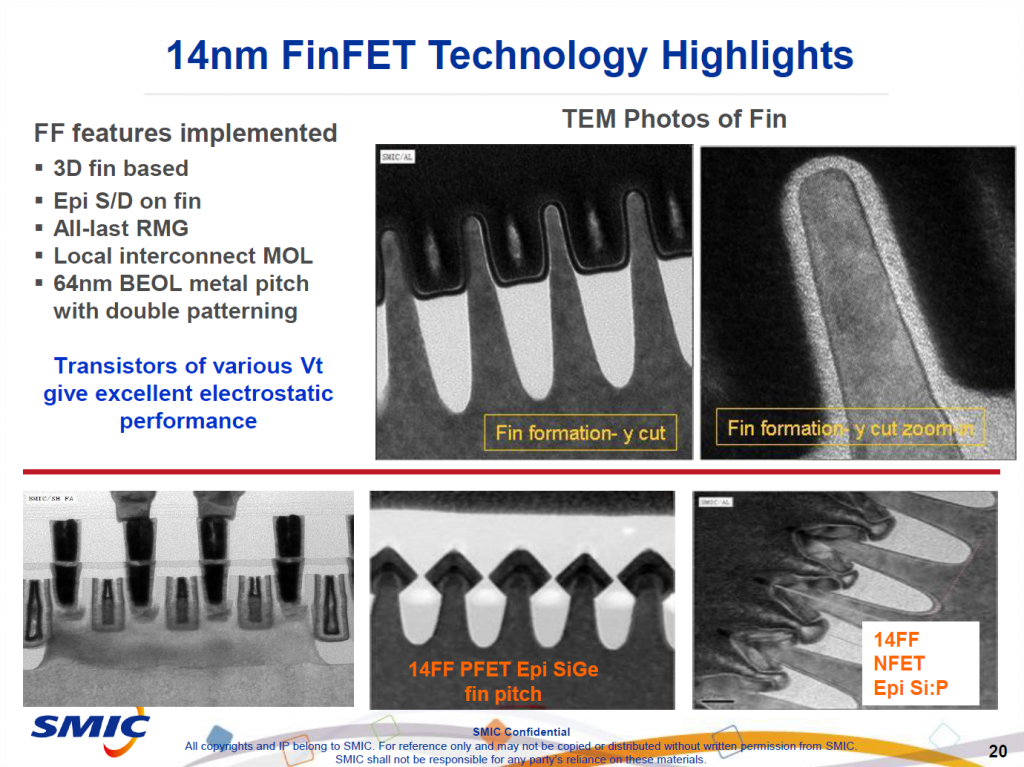 They now have three 300-mm fabs (Shanghai and Beijing 1 &2), and five 200-mm fabs, with one dedicated to the MEMS, imager and 3D IC specialty platforms, and another to bumping, WLCSP and testing; and they are aware of the need for patent coverage, having filed over 12,000 patents. They claim to be the most preferred foundry among Chinese fabless companies, with revenue from them growing at a 30% CAGR over the last ten years. SMIC has also set up a joint venture with JCET (SJSemiconductor, based in Jiangyin), focusing on wafer-level packaging technology.

In the Q&A session, someone asked if FDSOI was on the roadmap ‚Äì apparently, nobody is asking, though it‚Äôs possible ‚Äì the focus is still on finFETs. And 28-nm HKMG is now in production.

Next up was Ed Pausa from PricewaterhouseCoopers (PWC); I thought I was an old stager in the business these days, having started in 1970, but Ed started with Fairchild in 1959! PWC recently published a report on China‚Äôs impact on the semiconductor industry (available here), and Ed went through it in considerable detail. It appears that China‚Äôs semiconductor consumption hit a new record in 2014, at 57% of the worldwide market, and it‚Äôs been over 50% for the last four years.

The gap between consumption and production continues to grow, however, to $140Bn in 2014, and it is expected to keep on growing, despite well-publicised government attempts to reduce it.

As of 2014, there were 165 wafer fabs there, of which ten are 300mm. There are now reported to be more than 660 design houses, though PWC estimates that no more than 100 are actually viable fabless companies. At the packaging, assembly and test end of the spectrum, there were 120 facilities, which gave China 33% of this type of worldwide floor space, the largest share.

In 2014 SK Hynix topped the table of semiconductor revenue, followed by HiSilicon and SMIC. Only four of the top ten appear to be domestic Chinese companies, the others are all subsidiaries of foreign multinationals.

After Ed it was my turn to speak, and the topic of my talk was ‚ÄúChina‚Äôs Penetration into Mobiles ‚Äì Real or Imaginary?‚Äù, which gave me the chance to show a few teardowns of Chinese-made phones, and do a comparison with the iPhone SE. I started with a quick look at some smartphone statistics ‚Äì by coincidence ICInsights had published them a week before The ConFab; 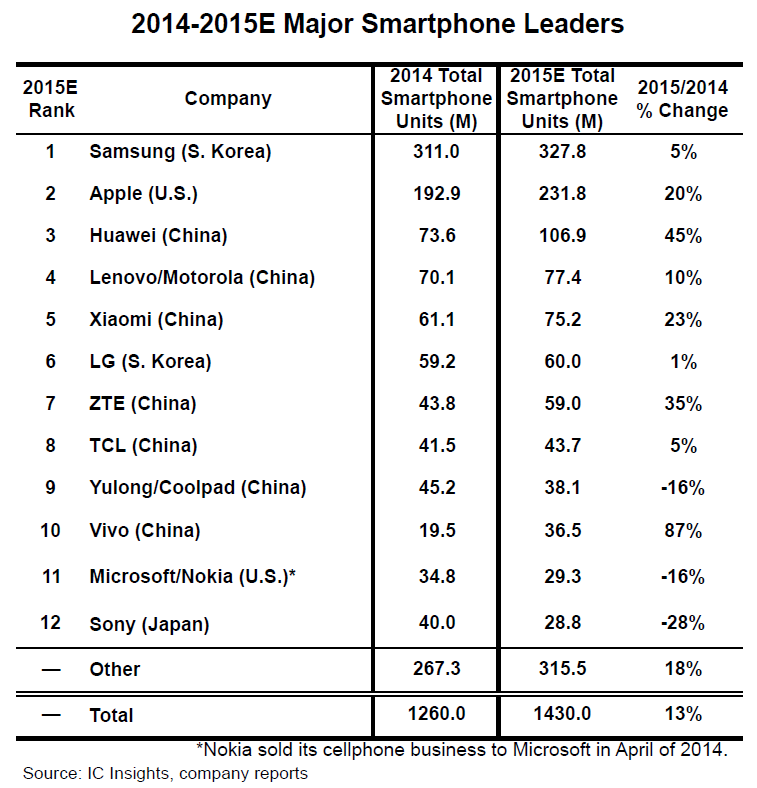 And we can see that eight out the top twelve companies are China-based. Then I did a quick run through design wins by Mediatek, Spreadtrum and HiSilicon, before getting into the teardowns.

First we looked at a Huawei Mate 8, a high-end phone targeting the same space as the Samsung Galaxy 7 and the iPhone. This has a complex bill of materials (BOM), but the lead chips are from Huawei‚Äôs subsidiary HiSilicon, including their Kirin 950 application processor fabbed in TSMC‚Äôs 16FF+ process. 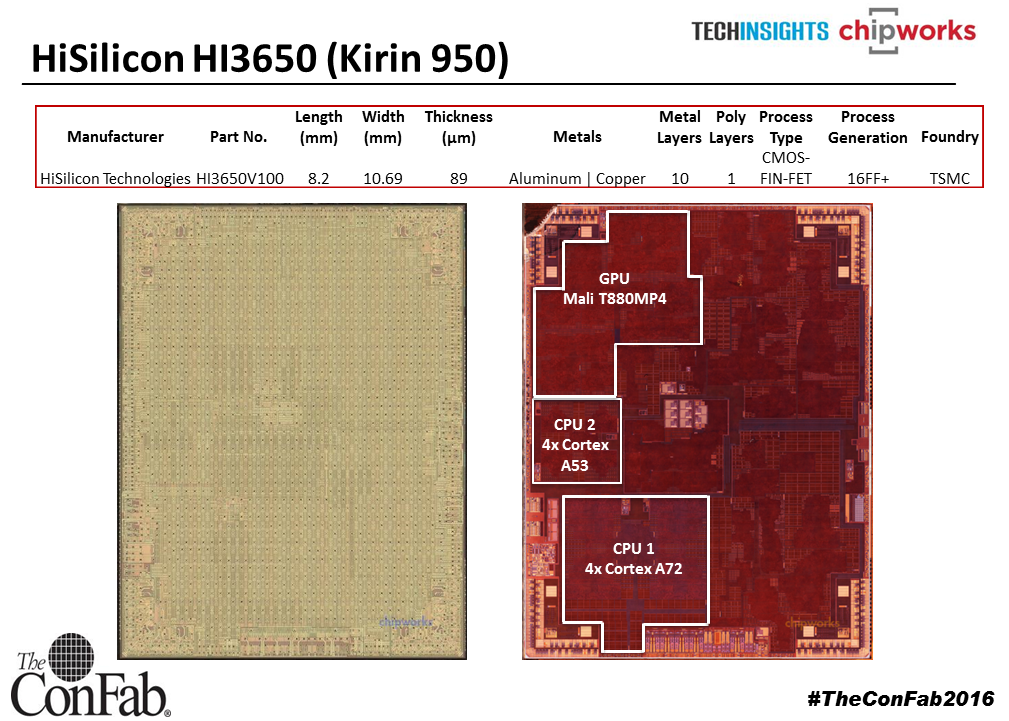 Then we had a value 4G device, the JXD T5 (Blaster Mini) one of the top 10 phones in the Asia-Pacific region in March. Now that we have moved down-market, it is less complex, focused on Chinese cellphone bands, and with a cheaper camera. Mediatek dominated the silicon here, but the touchscreen controller and camera were also Chinese, from Focaltech and Omnivision.

When we get to basic 2G/3G phones (a Lenovo T2 and a Lava Iris Atom), the only non-Chinese chips are the memories and the accelerometers ‚Äì everything else originated from China, including the RF front end.

For comparison we then examined the Apple iPhone SE, which of course is a complex worldphone; the winners here (apart from Apple‚Äôs own designs) were Qualcomm and Texas Instruments, and in the RF front end, Qorvo and Skyworks.

In part my talk was a not-so-subtle sales pitch for our new ‚ÄúInside Technology‚Äù service, which is basically a subscription portal to our database of teardowns and parts analyses ‚Äì in the case of semiconductor processes, down to the atomic scale, since it includes access to TEM images and materials analyses. Since we‚Äôve been doing it for over twenty years, that‚Äôs a lot of data!

As with many product launches, we‚Äôve made a video ‚Äì I think it‚Äôs quite impressive, but then I am a little biased, since in the case of the teardowns, I showed, it was the tool that I used to compile the design win information and the teardown BOMs for the different phones, and in the iPhone I showed that we can see that the QFE1100 envelope tracker chip was used in 67 different phones, and that there were three different versions from two different foundries. 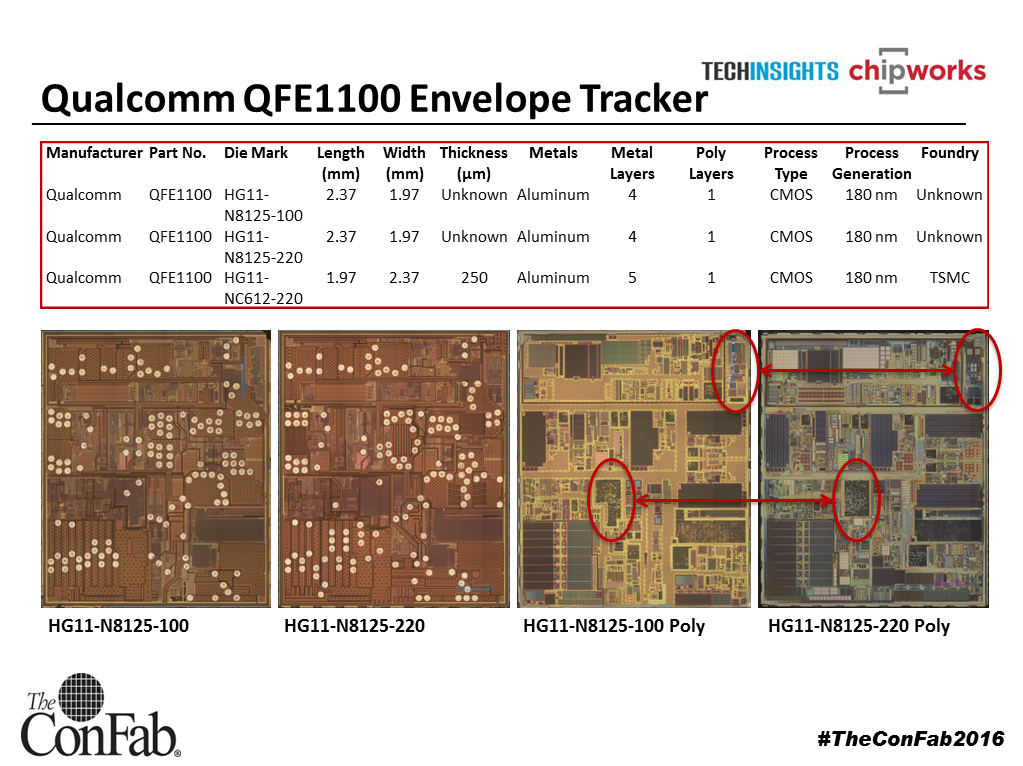 Then we had a quick look at patent landscapes for Mediatek, Huawei, and Apple, and the penultimate slide told the story that I was focused on; using ICInsights‚Äô categorization of the types of chips in a mobile phone, Chinese-made chips are in seven of the eight categories.

In retrospect I should not have included Mediatek, since they are Taiwan-based, but that does not change the essential nature of the story, that China-designed and fabbed chips are making their way into mobile phones, especially at the value end of the market. 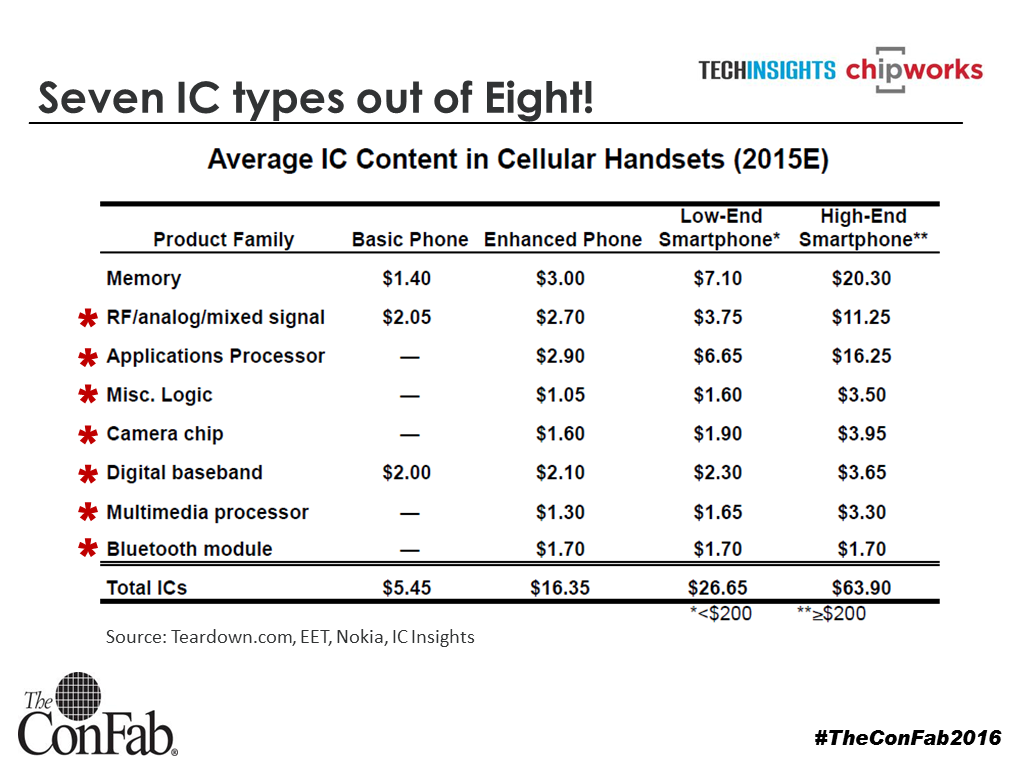 Given my liberal use of ICInsights‚Äô information as background for my talk, it was slightly ironic that the final keynote speaker was Bill McClean himself, of ICInsights.

Bill started out with the background that in the last decade our IC industry cycles have morphed from a capacity/capital spending driven cycle to one that is much more controlled by world GDP. 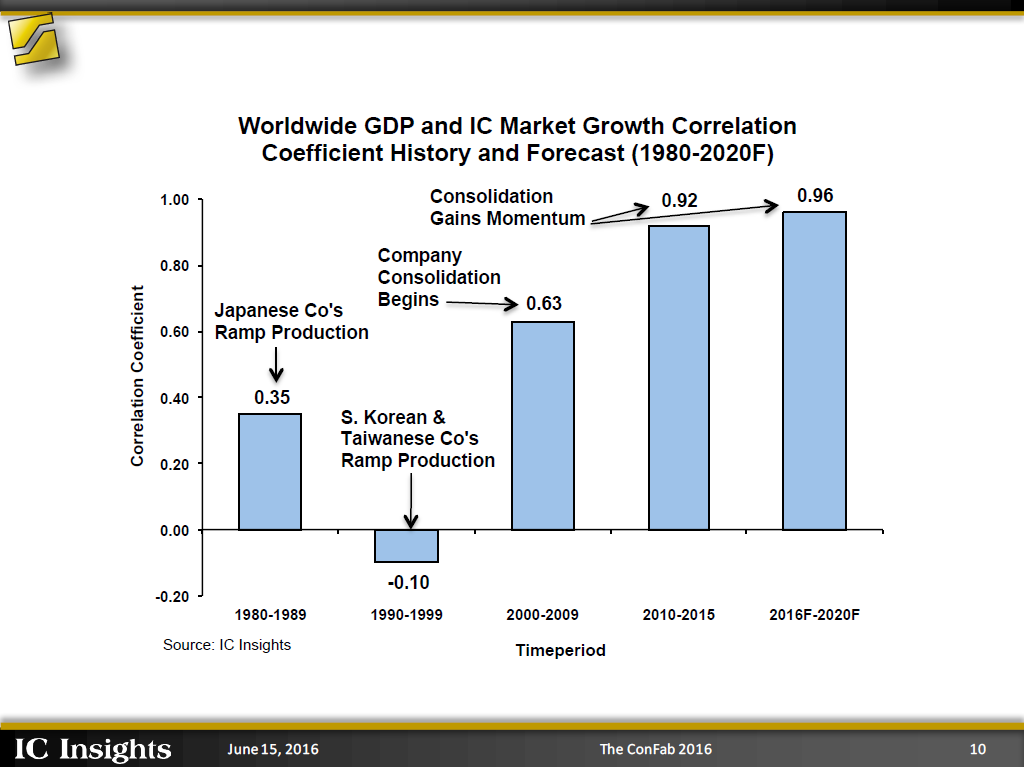 Then he moved on to China‚Äôs role in the IC world, echoing Ed Pausa‚Äôs comments that the IC consumption vs IC production gap is growing, and their government is making a well-funded push to reduce that gap. His slightly surprising conclusion (at least to me) is that this effort is failing.

His contention is that there is not yet a strong indigenous pure-play foundry industry, nor a strong presence in the fabless IC supplier space, since fabs there only take ~7% of the world market (and that includes foreign-owned fabs), and the fabless companies are at 10% market share.

There have been some successes ‚Äì several joint venture fabs are being set up, notably with UMC, Powerchip, and GLOBALFOUNDRIES, and on the acquisition front, (e.g.) NXP has sold two divisions to JAC Capital, and Omnivision is now China-owned. On the other hand, moves to buy Micron, Fairchild, and a chunk of Western Digital have failed, and Bill‚Äôs opinion is that any significant purchases of US-based companies are now highly unlikely, and other governments are taking a similar position.

That wrapped up the Confab for this year, just a final networking lunch to finish, and then we all went our different ways. The ConFab in 2017 will be on June 14 ‚Äì 17, again at the Encore in Las Vegas.