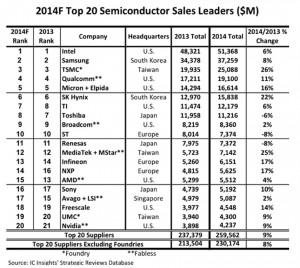 IC companies headquartered in South Korea and Taiwan lead the way in DRAM and flash memory and foundry services. 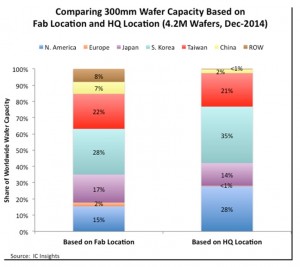 Our friends at Digitimes have reported that SMIC has joined the China group of China-based investors looking to buy STATS ChipPAC which includes Jiangsu Changjiang Electronics Technology (JCET).Â  JCET is Chinaâ€™s largest semiconductor chip tester with five production plants located in the provinces of Jiangsu and Anhui.

In Nov 2014, JCET made a $780 MM offer to acquire STATS ChipPAC. Negotiations are currently scheduled to complete at the end of the year.

Under the proposal, SilTech Shanghai (parent of SMIC) will put $100 MM into the deal. The IC Fund set up by the Chinese government is another co-investor. Incorporated in September 2014, the IC Fund is Chinaâ€™s national investment fund aiming to boost development of the local IC industry.

China to become predator for IC business consolidation during 2016-2020 ?

Digitimes also reports that they expect Chinas next 5 year plan (2016-2020) to reveal â€śâ€¦there is no doubt that China is likely to become one of the major predators for IC businesses during the periodâ€ť. Further predicting that â€śâ€¦Taiwan-based IC design houses and IC backend service providers are likely to become the preys to be hunted by China-based IC companies.â€ť