Reports are that Samsung EM (Electro-Mechanics), part of the Samsung Group, is entering the integrated circuit packaging business [link]

Samsung Electronics system LSI and Samsung Electro-Mechanics will join forces to staff the project and launch the business. They will transform current LCD assembly lines in Cheonnan KR into IC packaging lines. It is unclear whether they have developed full panel processing capability which many packaging OSATS have been trying to accomplish, or they will work in smaller formats.

Certainly their goal is to supply both Samsung and win the business of smartphone makers, like U.S.-based Apple. Apple recently gave a large order to Samsungâ€™s competitor TSMC who will be using their InFO based FO-WLP packaging technology in Apples next smartphone.

Samsung EM has announced that they will be packaging power management ICs with Fan-out Wafer Level Package (FO-WLP) in their new factories.

Plans are for the packaging factories to be operational in the first half of 2017.

Continuing our look at the 2016 ECTC

Closing out the morning for the â€śAdvances in Fan Out Packagingâ€ť session at the 2016 ECTC, Matt Lueck of RTI Int discussed the results of their joint program with X-Celeprint.

In their micro transfer-printing technology a polymer layer is first applied to the substrate before the assembly process, and the devices are assembled in a face-up configuration. Following the formation of the reconfigured substrates, conventional redistribution layer (RDL) and solder ball processing was performed. Two different photoimageable spin on dielectrics, HD4100 PI and Intervia 8023 epoxy,

were used as the RDL dielectrics. The fan-out package contains no molding compound and is made using standard wafer-level packaging tools.

Micro-transfer printing was used to assemble reconfigured wafers of devices (80um x 40um chips with a redistribution metal and six contact pads), onto 200mm wafers. After assembly, they undergo a standard wafer level redistribution and bumping process. The final fan-out package pitch on the 200 mm wafer is 1.4mm x 1.0mm with six 250 ÎĽm solder bumps. The fan-out packages were assembled and reflowed onto FR4 test boards.

In the figure below shows (A) the chiplet source wafer after partial removal of chiplets with the elastomer stamp; (B) a completed fan out package before solder ball placement; (C) close-up of the interconnect to the chi pads; (D) Final FO-WLP 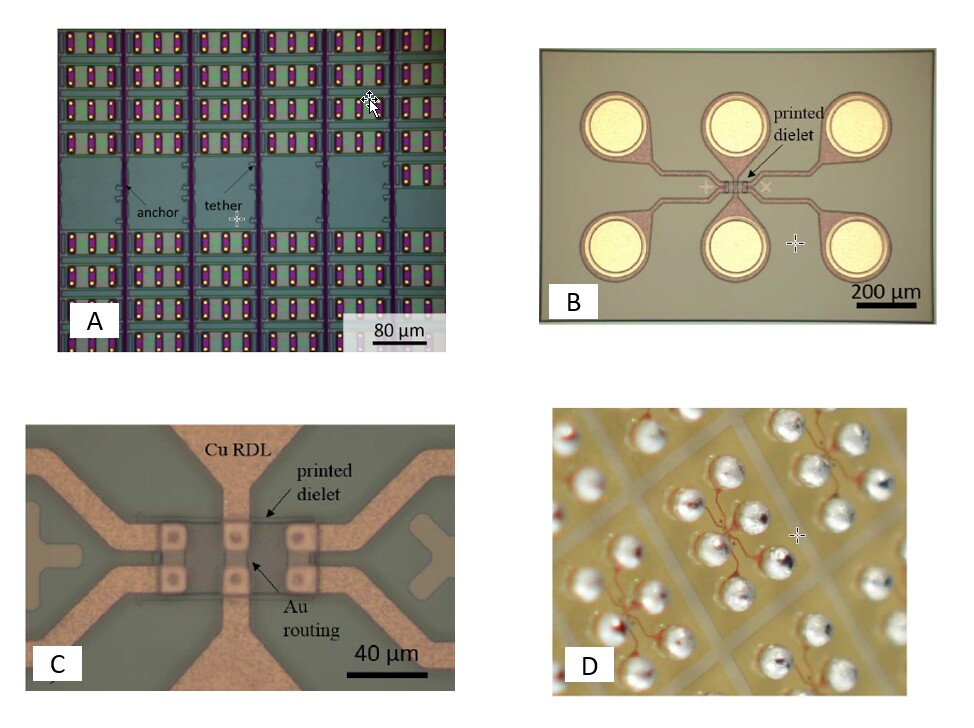 Initial yields are reported to be 97%.