In IFTLE 222, we discussed the recent announcement by China that they are becoming a major predator of the IC business. This is exemplified by recent acquisitions of STATSChipPAC (see IFTLE 222)(link),Â  FlipChip Int (FCI) (link) and Omnivision.

Now, according to Reuters, IBM Corp has announced that they will share technology with Chinese firms and will actively help build Chinaâ€™s industry. â€śIBMâ€™s new approach allows Chinese companies to build everything from semiconductor chips and servers based on IBM architecture, to the software that runs on those machinesâ€ť.

Apple A9 Orders Shift to TSMC

EE Times reports that TSMC will take more orders for Appleâ€™s A9 processor (for the iPhone 6S) at the expense of Samsung, which reportedly is having yield problems. Apple originally gave Samsung about 80% of the A9 orders and the rest to TSMC. Now reports are that TSMC will get about 70% of Appleâ€™s overall business starting in the third quarter of 2015 (see previous discussions in IFTLE 228).

There are reports that TSMCâ€™s 16nm yield is better than Samsungâ€™s 14nm yield (both using finfet technology).

This will be the first time that Apple has split the foundry service of the same processor at two suppliers. Equipment and materials will likely see rush orders from TSMC to meet demand. TSMC will also need to work more closely with OSATS such as ASE and SPIL for the full solution.

Because of the reported overheating issue in Qualcommâ€™s 20nm Snapdragon being made at TSMC, Â Qualcomm is reportedly cutting its 20nm orders at TSMC and is accelerating its transition to 14/16nm at Samsung. Since Qualcomm accounts for 40% to 50% of TSMCâ€™s 20nm demand, this will have a significant impact on TSMC revenue.

Many manufacturers struggle with removal of heat from chips in phones and tablets. Unless that heat is removed, hotspots can form when devices are in use, causing thermal damage.

Fujitsu has built a microscale heat pipe, less than 1mm thick. Itâ€™s comprised of two parts — the first is an evaporator that absorbs heat from a heat source and the second is a condenser that dissipates the heat away, with the two parts connected by pipes. 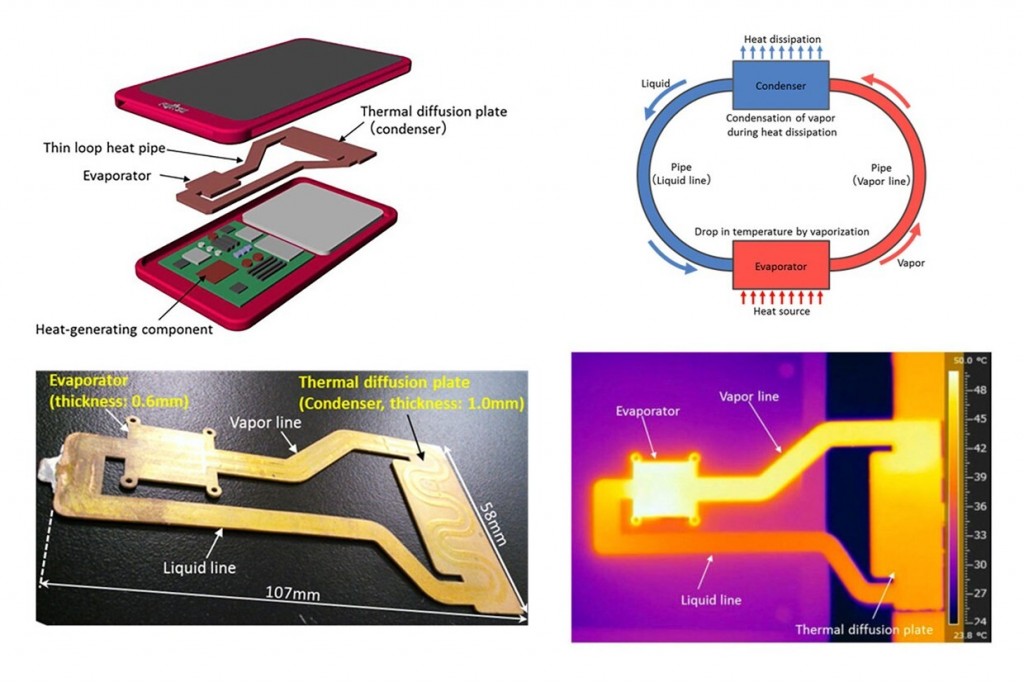 Capillary actionÂ to drive flow. Inside Fujitsuâ€™s device, the tubes are filled with pores that are just the right size to get fluid to circulate. Fujitsu reports that “Compared to the previous thin heat pipes and material of highly thermal conductive sheets, this new device allows for approximately five times greater heat transfer,” The technology allows CPUs and other parts to function at low temperatures while preventing heat concentration within localized areas. Fujitsu reports the technology should make its way into smartphones around 2017. Fujitsu adds that itâ€™s also looking into potential applications in communications infrastructure, medical equipment, and wearable devices.