As the world of advanced manufacturing enters the sub-nanometer scale era, it is clear that ALD, MLD and SAM represent viable options for delivering the required few-atoms-thick layers required with uniformity, conformality, and purity.

Device and system technologies across several industries are on the verge of entering the sub-nanometer scale regime. This regime requires processing techniques that enable exceptional atomic level control of the thickness, uniformity, and morphology of the exceedingly thin (as thin as a few atomic layers) film structures required to form such devices and systems.[1]

In this context, atomic layer deposition (ALD) has emerged as one of the most viable contenders to deliver these requirements. This is evidenced by the flurry of research and devel- opment activities that explore the applicability of ALD to a variety of material systems,[2,3] as well as the limited introduction of ALD TaN in full-scale manufacturing of nanoscale integrated circuitry (IC) structures.[4] Both the success and inherent limitations of ALD associated with repeated dual-atom interactions have stimulated great interest in additional self-limiting deposition processes, particularly Molecular Layer Deposition (MLD) and Self- Assembled Monolayers (SAM). MLD and SAM are being explored both as replacements and extensions of ALD as well as surface modification techniques prior to ALD.[5]

ALD is a thin film growth technique in which a substrate is exposed to alternate pulses of source precursors, with intermediate purge steps typically consisting of an inert gas to evacuate any remaining precursor after reaction with the substrate surface. ALD differs from chemical vapor deposition (CVD) in that the evacuation steps ensure that the different precursors are never present in the reaction zone at the same time. Instead, the precursor doses are applied as successive, non-overlapping gaseous injections. Each does is followed by an inert gas purge that serves to remove both byproducts and unreacted precursor from the reaction zone.

The fundamental premise of ALD is based on self-limiting surface reactions, wherein each individual precursor-substrate interaction is instantaneously terminated once all surface reactive sites have been depleted through exposure to the precursor. For the growth of binary materials, each ALD cycle consists of two precursor and two purge pulses, with the thickness of the resulting binary layer per cycle (typically about a monolayer) being determined by the precursor-surface reaction mode. The low growth rates associated with each ALD cycle enable precise control of ultimate film thickness via the application of repeated ALD cycles. Concurrently, the self-limiting ALD reaction mechanisms allow excellent conformality in ultra-high-aspect-ratio nanoscale structures and geometries.[6]

A depiction of an individual ALD cycle is shown in FIGURE 1. In Fig. 1(a), a first precursor A is introduced in the reaction zone above the substrate surface. 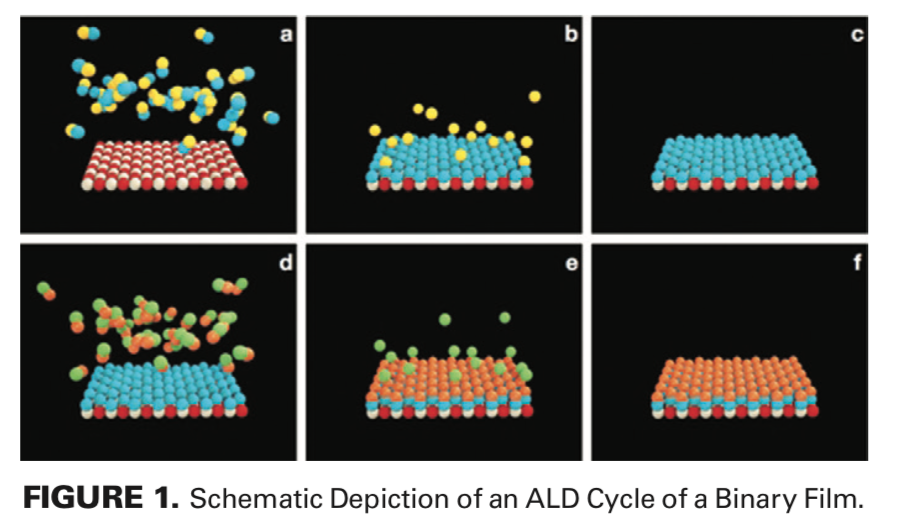 Precursor A then adsorbs intact or reacts (partially) with the substrate surface to form a first monolayer, as shown in Fig. 1(b), with any excess precursor and potential byproducts being evacuated from the reaction zone through a subsequent purge step. In Fig. 1(d), a second precursor Y is injected into the reaction zone and is made to react with the first monolayer to form a binary atomic layer on the substrate surface, as displayed in Fig. 1(e). Again, all excess precursors and reaction byproducts are flushed out with a second purge step 1(f). The entire process is performed repeatedly to achieve the targeted binary film thickness.

In some applications, a direct or remote plasma is used as an intermediate treatment step between the two precursor-surface interactions. This treatment has been reported to increase the probability of surface adsorption by boosting the number of active surface sites and lowering the reaction activation energy. As a result, such treatment has led to increased growth rates and reduce processing temperatures.[7]

A number of benefits have been cited for the use of ALD, including high purity films, absence of particle contami- nation and pin-holes, precise control of thickness at the atomic level, excellent thickness uniformity and step coverage in complex via and trench topographies, and the ability to grow an extensive array of binary material systems. However, issues with surface roughness and large surface grain morphology have also been reported. Another limitation of ALD is the fact that it is primarily restricted to single or binary material systems. Finally, extremely slow growth rates continue to be a challenge, which could potentially restrict ALDŌĆÖs applicability to exceptionally ultrathin films and coatings.

These concerns have spurred a renewed interest in other molecular level processing technologies that share the self-limiting surface reaction characteristics of ALD. Chief among them are MLD and SAM. MLD refers principally to ALD-like processes that also involve successive precursor-surface reactions in which the various precursors never cross paths in the reaction zone. [8] However, while ALD is employed to grow inorganic material systems, MLD is mainly used to deposit organic molecular films. It should be noted that this definition of MLD, although the most common, is not yet universally accepted. An alternative characterization refers to MLD as a process for the growth of organic molecular components that may contain inorganic fragments, yet it does not exhibit the self-limiting growth features of ALD or its uniformity of film thickness and step coverage.[2]

A depiction illustrating a typical MLD cycle, according to the most common definition, is shown in FIGURE 2. In Fig. 2(a), a precursor is introduced in the reaction zone above the substrate surface. Precursor C adsorbs to the substrate surface and is confined by physisorption (Fig. 2(b)). The precursor then undergoes a quick chemisorption reaction with a significant number of active surface sites, leading to the self-limiting formation of molecular attachments in specific assemblies or regularly recurring structures, as displayed in Fig. 2(c). These structures form at significantly lower process temperatures compared to traditional deposition techniques. 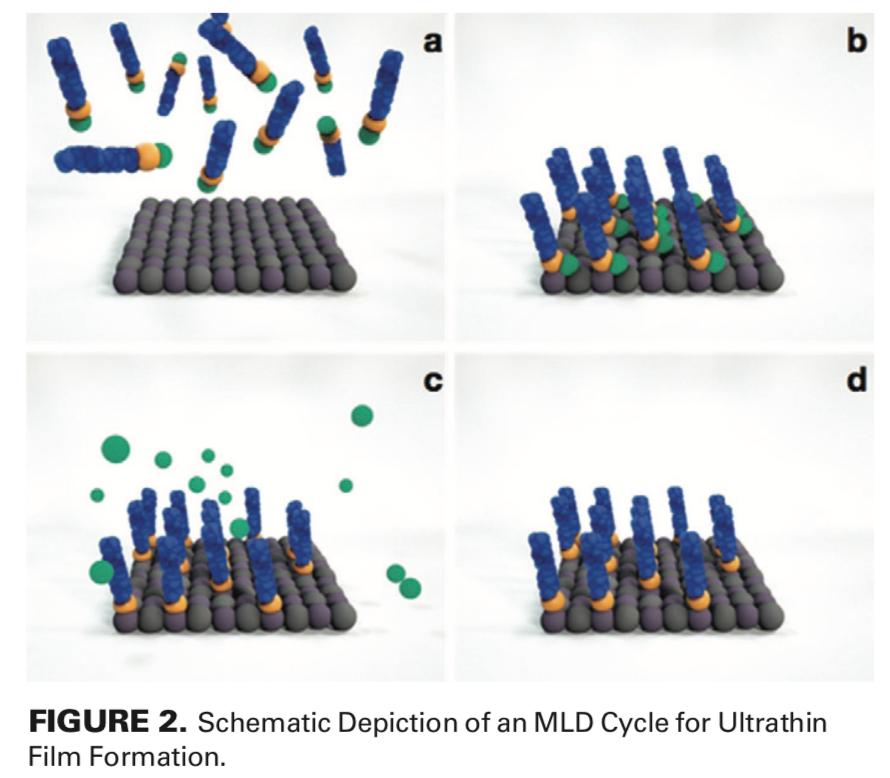 To date, MLD has been successfully applied to grow exceptionally thin films for applications as organic, inorganic, and hybrid organic-inorganic dielectrics and polymers for IC applications; [1,9] nanoprobes for in-vitro imaging and interrogation of biological cells; [10] photoluminescent devices; [7] and lithium-ion battery electrodes.[11]

SAM is a deposition technique that involves the spontaneous adherence of organized organic structures on a substrate surface. Such adherence takes place through adsorption from the vapor or liquid phase through relatively weak interactions with the substrate surface. Initially, the structures are adsorbed on the surface by physisorption through, for instance, van der Waals forces or polar interactions. Subsequently, the self-assembled monolayers become slowly confined by a chemisorption process, as depicted in FIGURE 3.

The ability of SAM to grow layers as thin as a single molecule through chemisorption-driven interactions with the substrate has triggered enthusiasm for its potential use in the formation of ŌĆ£near-zero-thicknessŌĆØ activation or barrier layers. It has also sparked interest in its appli- cability to area-selective or area-specific deposition. Molecules can be directed to exhibit preferential reactions with specific segments of the underlying substrate rather than others to facilitate or obstruct subsequent material growth. This feature makes SAM desirable for incorpo- ration in area-selective ALD (AS-ALD) or CVD (AS-CVD), where the SAM-formed layer would serve as a foundation or blueprint to drive AS-ALD or AS-CVD. [12,13]

To date, SAM has been effectively employed to form organic layers as thin as a single molecule for applications as organic, inorganic, and hybrid organic-inorganic dielec- trics; polymers for IC applications; [13,14] encapsulation and barrier layers for IC metallization; [15] photoluminescent devices; [5] molecular and organic electronics; [16] and liquid crystal displays.[17]

As the world of advanced manufacturing enters the sub-nanometer scale era, it is clear that ALD, MLD and SAM represent viable options for delivering the required few-atoms-thick layers required with uniformity, conformality, and purity. By delivering the constituents of the material systems individually and sequentially into the processing environment, and precisely controlling the resulting chemical reactions with the substrate surface, these techniques enable excellent command of processing parameters and superb management of the target specifications of the resulting films. In order to determine whether one or more ultimately make it into full-scale manufacturing, a great deal of additional R&D is required in the areas of understanding and establishing libraries of fundamental interactions, mechanisms of source chemistries with various substrate surfaces, engineering viable solutions for surface smoothness and rough morphology, and developing protocols to enhance growth rates and overall throughput.